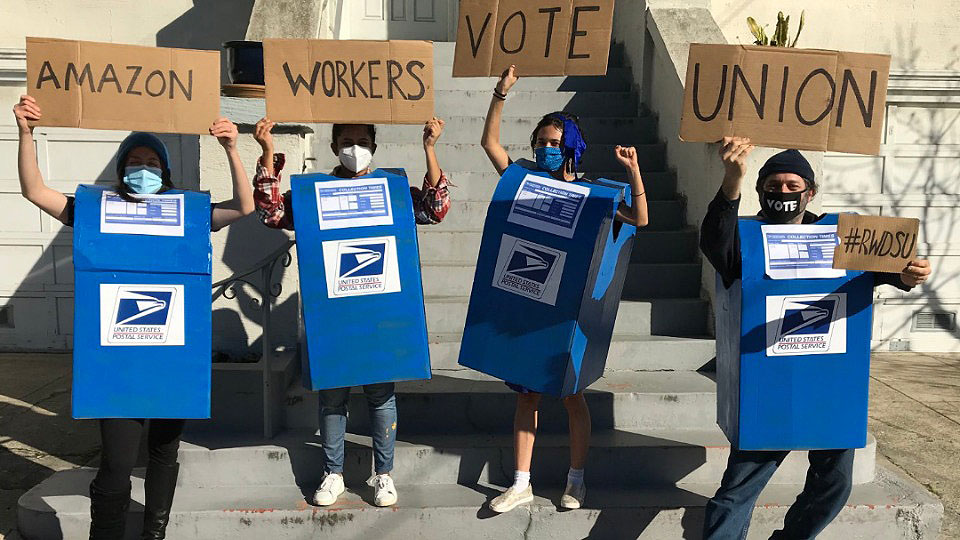 (BESSEMER, ALABAMA) - Overcoming one final company-crafted hurdle, almost 6,000 Workers - most of them Black in a 70% Black city - at the Amazon warehouse in Bessemer, Alabama are now voting by mail on whether to Unionize.

Final results of the balloting on whether the Workers will join the Retail, Wholesale, and Department Store Union (RWDSU), a sector of the United Food & Commercial Workers (UFCW), will be announced on March 29th.

The last-ditch hurdle, which other Anti-Union Bosses have tried, was to force the 5,805 Workers to vote in the traditional manner - in the warehouse during time off from their shifts - despite the lack of physical distancing and other anti-Coronavirus measures.

The National Labor Relations Board (NLRB), even with a Republican-named majority, unanimously approved the mail ballot.

“Once again, Amazon Workers ‘have won another fight in their effort to win a Union Voice,’” RWDSU President Stuart Applebaum said after the NLRB’s February 5th ruling for mail balloting, not in-person voting. “Amazon’s ‘blatant disregard’ for the health and safety ‘of its own workforce was demonstrated yet again by its insistence for an in-person election in the middle of the pandemic.’  (This) decision ‘proves that it’s long past time that Amazon starts respecting its own Employees and allow them to cast their votes without intimidation and interference.’”

If the RWDSU wins, it would mark a double breakthrough for Organized Labor in two notoriously hostile environments: Amazon and Alabama.

Only 8% of the state’s Workers were Union Members last year, a Bureau of Labor Statistics (BLS) survey reported.

And while Union Density rose around the U.S. in 2020, it declined in Right-To-Work (for less) Alabama.

Amazon’s also notoriously Anti-Union, even though it could easily afford to pay its Workers higher, living wages.

Its owner, Jeff Bezos, is one of the three richest people in the U.S.

None of Amazon’s facilities in the U.S. are Unionized.

He did not disclose who talked or the Biden aides’ response.

Appelbaum stressed the importance of the Bessemer campaign to the entire Labor Movement and its effort to break through in the notoriously Union-hating South.

There, bosses and politicians in the racially antagonistic and stratified society often play off Whites versus Blacks to thwart Union Organizing Drives by depriving Workers of local community support.

To Continue Reading This Labor News Story, Go To: https://peoplesworld.org/article/overcoming-company-hurdles-6000-amazon-workers-start-union-recognition-vote/