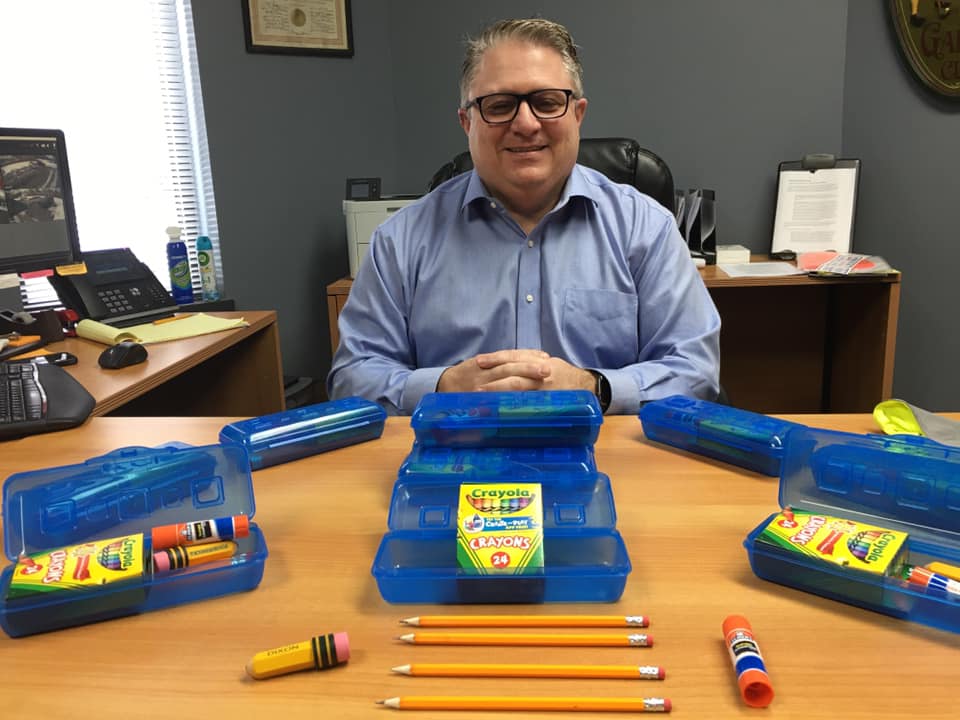 WNYLaborToday.com Editor’s Note: Pictured above, Laborers Local 210 Business Manager Peter Capitano displays a number of individual pencil kits that his Building Trades Union is handing out to Buffalo Schoolchildren as part of the Laborers International Union of North America’s (LIUNA) Feel the Care Initiative.  Housed inside each of these small, blue, plastic containers - which have been sterilized, are four pencils, a glue stick, an eraser in the form of a thick, short pencil and a small pack of crayons.    (WNYLaborToday.com Photos)

(BUFFALO, NEW YORK) – As part of Laborers International Union of North America’s (LIUNA) Feel the Care Initiative, Laborers Local 210 is distributing hundreds of individual and sterilized pencil kits to Buffalo schoolchildren, which is part of a much larger LIUNA effort across New York State that has also paid for back-to-school haircuts for 1,000 kids. 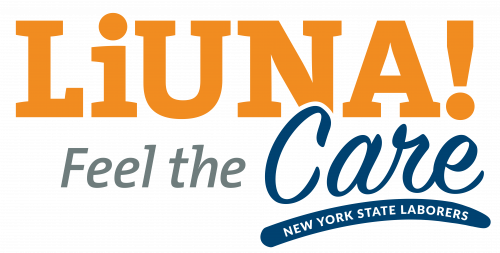 Housed inside each of these small, blue, plastic containers - which have been sterilized, are four pencils, a glue stick, an eraser in the form of a thick, short pencil and a small pack of crayons. 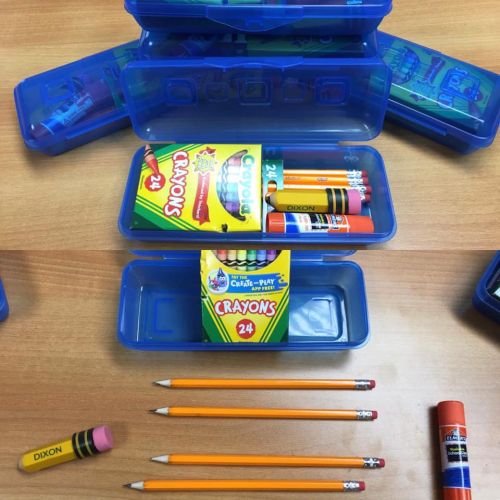 “We ‘wanted to reach out and do whatever we can’ (for local schoolchildren).  We asked and they said, ‘We can use anything you can get,’” said Capitano, who got the idea for local distribution to Buffalo’s schools from his church group, where one member is a Buffalo City School Teacher and another whose spouse is also a City School Teacher.

“The school supplies are (housed within) a plastic container ‘that can be easily wiped down’ (due to the Coronavirus) and the items ‘are stored safely inside.’  ‘It makes things a lot easier’ (for Teachers and their individual students),” said Capitano, (pictured below, standing next to a pallet loaded with boxes containing the pencil kits) who in his youth attended Buffalo City Schools at School 45 on Hoyt Street and then Grover Cleveland High School. 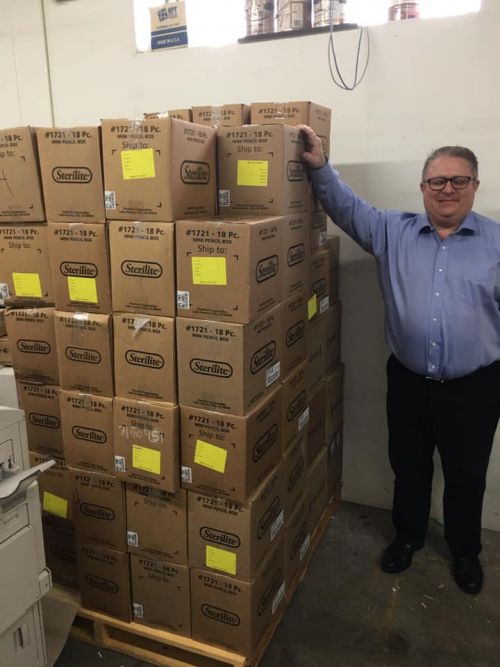 Suburban-headquartered Local 210, which represents 650 active Members and 300 Retirees, has a long history of community involvement in the Buffalo area, ranging from the Make-A-Wish Foundation to the Roswell Park Cancer Institute, as well as a number of individual drives that aid Union Members and Members of the Western New York community as well.

“The ‘heart’ of our (Union) organization ‘is to give back and continue to build a relationship with those in the City of Buffalo.’  ‘This makes us feel great.’  ‘A lot of our Members bring us fliers for worthwhile groups that ask for our help and we’re always helping them out,’” he said.

An affiliate of LIUNA, the New York State Laborers' Union represents 24 Locals (including 210) and five District Councils that combine to represent 40,000 Members who are employed in the construction industry and in other fields across New York State.

LIUNA’s Feel the Care Initiative is described as a philanthropic initiative developed under the direction of LIUNA General Secretary-Treasurer & New England Regional Manager Armand E. Sabitoni, which allows the Staff of the New England and New York Tri-Funds to partner with LIUNA’s Local Unions to engage in community outreach that uplifts neighborhoods through volunteerism and purposeful charitable giving.

Since launching its Feel the Care Initiative, New York’s Laborers Unions have continuously found new and creative ways to help the communities where its Members live, work and raise their families, Union Representatives said.

To date, LIUNA has volunteered at and donated much-needed supplies to local food pantries, provided children with back to school supplies and free haircuts, provided COVID-19 safety posters for local elementary schools and participated in multiple events honoring its Members and Front Line Health Care Workers, they said. 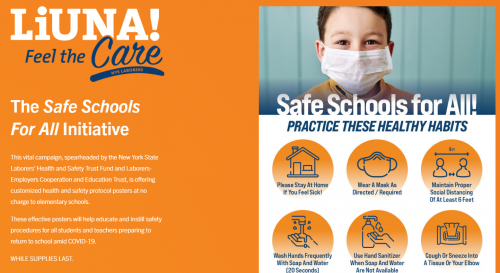 Around $25,000 of Member Dues contributions has been used for the initiative, part of which has been used to distribute more than 6,000 of the pencil boxes across New York State.

“These past (12 months) ‘have been like no other,’” Marchese told WNYLaborToday.com.  “Our Members ‘go to work and contribute’ (to their communities).  We wanted to do the pencil boxes ‘because we got word that students were having a hard time sharing their supplies.’  So by doing this, ‘we helped check it off the list’ (of supplies they needed).  We’ve also paid for back-to-school haircuts for (around 1,000) kids (across New York State), ‘which is really awesome.’  ‘It may not seem like a lot, but (for economically struggling families with) two or three kids - its money they don’t have.’” 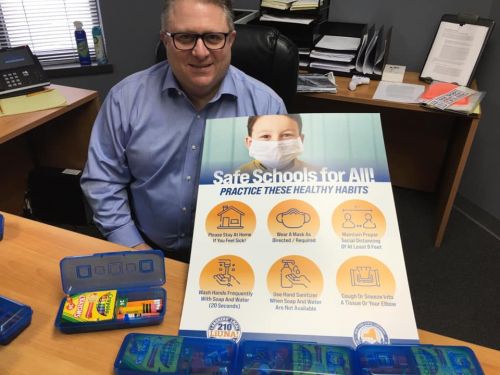 The New York State Laborers’ Health and Safety Trust Fund and Laborers-Employers Cooperation and Education Trust (LECET) is also proud of its Safe Schools For ALL Initiative, which is offering customized health and safety protocol posters at no charge to elementary schools.  The posters were created to help educate and instill safety procedures for all students and Teachers preparing to return to school amid COVID-19, LIUNA Representatives said.