âUnsafe Labor is Deadly Laborâ - âWith All The Uncertaintiesâ Due To COVID-19 In The Business World, âThe Need To Remain Safe And Union Strong Holds True Now More Than Everâ 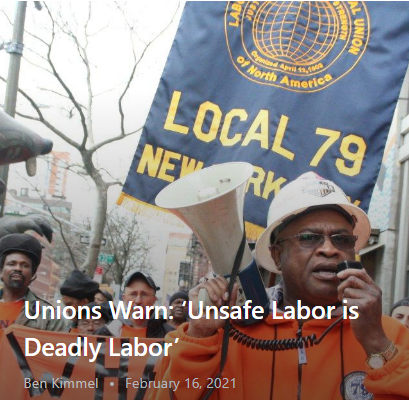 (NEW YORK CITY) - Although commercial buildings are still operating with minimal occupancy, there is new construction being done throughout New York City, but - unfortunately, many of these projects are being done without Union Workers.

Reports of unorganized labor and the exploitation of Construction Workers at 555 West 22nd Street in New York City is just one example.

Laborers Local 79 and “Scabby” the inflatable rat have also made an appearance at 2 Grand Central Tower (140 East 45th Street).

Scabby is being used to protest HDK Construction and their degradation of Construction Workers at the downtown worksite.

When asked about the protest, Chaz Rynkiewicz, Local 79’s Director of Organizing, told LaborPress.org: “HDK and Kevin O’Sullivan ‘are notorious actors’ in the New York City Construction Industry, ‘well known for Worker exploitation and other violations.’  ‘We hope the next mayor works with the New York City Council to ensure that infamous contractors are moved to either a higher standard or out or town.’”

Bad actors in the New York City Construction Industry are nothing new.

The Building Trades are trying to pull together and create a synergy amongst all Unions to confront them.

It’s a hot topic on many Social Media platforms.

One recent post wondering, “When does it end?” highlights AECOM Tishman’s long list of violations and is typical of the frustration Trade Unionists are feeling.

There are few secrets in the digital age, of course.

Violations - as well as the amounts paid in fines, can be easily found on-line.

Here’s just one: The post is being shared as a “call to arms” between various Unions and Union Members.  The pledge declares: “AECOM Tishman must stop using irresponsible contractors. When large organizations take advantage of Working People, the entire Labor Movement suffers. We at the District Council advocate on behalf of ALL Workers.  When companies like AECOM Tishman hire irresponsible contractors like Trident General Contracting - wages, safety, health coverage and quality are put at risk.  This is an assault on the construction industry, on good, hard-working Tradespeople and on the people of New York City as a whole.  We will not sit idly by and watch large organizations decimate the Middle Class.”

Once more, the need to create and maintain synergy in the Unionized Trades is crucial to the betterment of our Tradespeople.

To bargain collectively and efficiently, to educate, to ensure the security of our benefits and to maintain a top level of professionalism - safety and workmanship cannot be compromised.

The ongoing Coronavirus Pandemic has impacted everyone.

There is, however, no room for large companies to cut corners by using unskilled and unorganized labor at the risk of human life.

As one man passing 2 Grand Central Tower said: “What else has to happen for people to realize that unsafe labor is deadly labor?”

With all the uncertainties due to COVID-19 in the business world - the need to remain safe and Union Strong holds true now more than ever.

To Directly Access This Labor News Story, Go To: www.laborpress.org/unions-warn-unsafe-labor-is-deadly-labor/