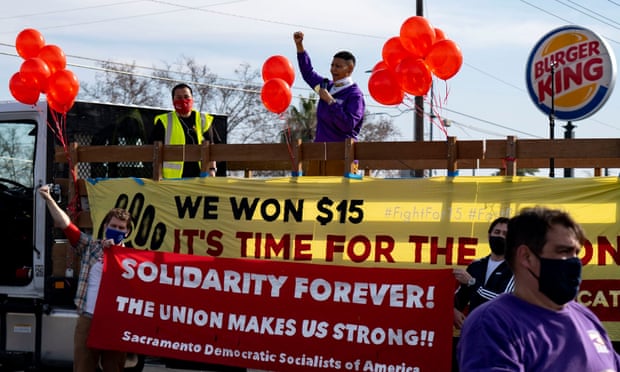 The action comes as Congress prepares to debate a Federal rise in the Minimum Wage to $15 from its current rate of $7.25, the first Federal raise since 2009.

Workers in cities - including Atlanta, Charleston, Chicago, Detroit, Houston and St Louis, will be joined by Home Care and Nursing Home Workers in support of a $15 Minimum Wage and the right to join a Union.

President Joe Biden has pledged to increase the Minimum Wage during his election campaign, but has recently suggested the increase may not make it into the $1.9 trillion Coronavirus Relief Package he is trying to push through Congress.

Biden has said the increase is central to his pledge to narrow racial economic inequality.

Progressive U.S. Senators including Bernie Sanders, a long-time supporter of the Union-backed Fight For $15 Movement, which has campaigned for the rise, and others are working to ensure the Federal raise remains in the package.

Democrat Nancy Pelosi, the House speaker, confirmed last week that the wage rise will be part of the House Bill, but that it faces a tougher fight in the Senate where Democrats have only a slight majority.

Democrats hope to pass the Bill through a process known as “budget reconciliation,” which would require only a simple majority in the Senate.

“This Black History Month, ‘we have a chance to make our own history by winning a living wage of at least ($15) an hour and lifting millions of families out of poverty,’” said Taiwanna Milligan, a McDonald’s Worker from Charleston, South Carolina. “For decades, McDonald’s ‘has made billions in profit off the backs of Workers like me, paying us starvation wages.’  I’m striking today ‘because I need at least ($15) an hour to survive and because I know the only way to make change is to stand up, speak out and demand it.’”

The eight-year Fight For $15 Movement has made significant progress in recent years with several states - including California, Florida and New York, voting to increase their minimum wages to $15 an hour.

While polling shows the increase is favored by the majority of Americans, opposition remains from most Republican politicians, some Democrats and lobby groups.

A Congressional Budget Office report published this week calculated 27 million Americans would benefit from a raise and 900,000 people would be lifted out of poverty.

But the report also cautioned the raise would cost 1.4 million jobs and add significantly to the Nation’s debt.

The findings have been disputed by other economists with the Left-leaning Economics Policy Institute calling them “wrong and inappropriately inflated.”

To Continue Reading This Labor News Story, Go To: www.theguardian.com/us-news/2021/feb/12/fast-food-workers-15-cities-black-history-month-strike-15-an-hour