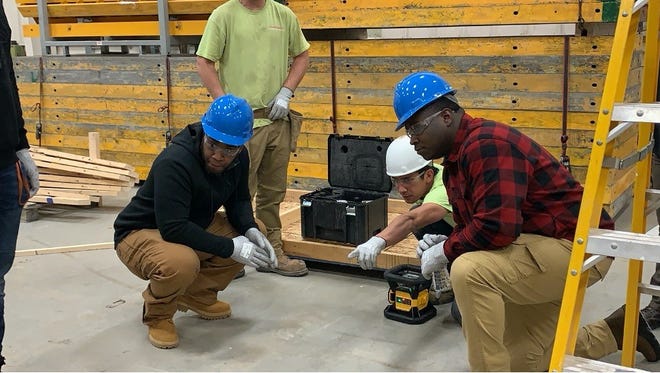 (ROCHESTER, NEW YORK) - Before discovering his true calling as an International Brotherhood of Electrical Workers (IBEW) Local 86 Journeyman-Wireman, Kereem Berry worked odd jobs with little career direction.  Then, in 2007, he packed up his apartment and moved from Manhattan to Rochester.  He knew he needed a change.

After meeting with the IBEW's Joint Apprenticeship Training Committee Coordinator, an introduction initiated by a former Co-Worker, Berry began his journey into the Skilled Trades.

Berry, who became a model Wireman, impressed local leaders of the Building Trades, most notably, Dave Young Jr., who served in the past as Business Manager of Local 86 and President of the Rochester Building & Construction Trades Council.

According to the U.S. Bureau of Labor Statistics (BLS), only 7% of working men in construction and extraction occupations are Black - and only 4% of everyone working in those fields are women.

The Apprenticeship Preparation Program works to change that disparity by opening doors to disenfranchised individuals who would not have been introduced to construction otherwise.

"Helping to diversify the Trades ‘is not only the right thing to do but Federal and state participation language in project labor agreements requires it,’" Young said. "Unless there is ‘continued pointed recruitment, the day is going to come that the work pool for the Trades is going to struggle.’"

With its facility located on 40 Humboldt Street, the program is in the second phase of a two-part vetting and construction training process.

In the first half, Project Phoenix Trainees renovate vacant "zombie" homes in Rochester through a partnership with City Roots Community Land Trust.

Both parts of the program introduce and prepare individuals to work in all construction paths.

Berry, who is now the Executive Director of MAPP/Project Phoenix says: "Union construction is not a 'water cooler' job.  ‘There is a culture and attitude that goes along with it.’  ‘We are busy working by (7 a.m.) sharp no matter the weather.’"

About recruiting in Rochester, Berry says that he walks right into the community.

"We ‘go out in the neighborhoods and stop people on street corners.’  ‘We pluck them out of the hood', we ‘canvass - like a campaign - via word of mouth and on-line with Social Media,’" Berry said.

But not everyone makes it through the program.

Anyone with real interest, a high school diploma or GED can apply, but Berry said: "Working in this field, there is a ‘high-level’ work ethic.  ‘You have to be on time, ready to work and working.’  ‘Not working hard at not’ working.  In construction, ‘you have to produce.’"

To Continue Reading This Apprenticeship And Training Labor News Story, Go To: www.democratandchronicle.com/story/money/2021/02/16/jobs-and-careers-building-trades-program-attracts-persons-color/6762622002/