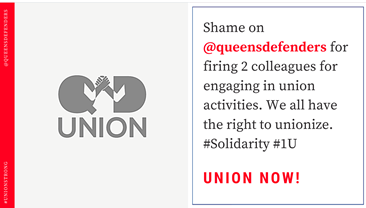 Pro-Union Employees and a Union Organizer alleged that the firings were an illegal retaliation for their support of the Union.

“Anna and I ‘have been some of the most vocal people in support of the Union,’” Vasquez told New York Focus. “Clearly my employer ‘did not take kindly to that - because now I’m fired.’”

The Queens Defenders Union announced its drive for recognition as a Chapter of the Association of Legal Aid Attorneys (ALAA) in December, claiming the support of 90% of eligible Employees and multiple Queens Elected Officials.

Despite that opposition, Executive Director Lori Zeno said in a January interview that the firm’s leadership did not intend to penalize Union supporters.

“If they really want a Union and they vote for a Union, it is what it is.  I’m not going to start punishing people,” she said.

Employees say that’s exactly what she did.

Vasquez said she was called in to an unexpected meeting at which Zeno informed her that she was fired.

Zeno said that her termination was “performance-based” - but provided no evidence of sub-par professional conduct, Vasquez added.

Since she began working at Queens Defenders in June 2017, Vasquez said, no one in management had taken issue with her work or threatened disciplinary action.

During the Coronavirus Pandemic, Vasquez helped the agency organize a food pantry in Far Rockaway and was one of the few Employees to continuously work in person, she said.

“Management knows that they can count on me,” she said.

Prior to their terminations, Vasquez had met with a State Assembly Member to discuss the Union Drive and had advocated for Unionization in Staff meetings.

Avalone had spoken to a news site in support of the Union, ALAA Organizer Alexi Shalom said.

“I wanted to join the Union ‘because it’s our right.’  As Defenders, ‘we also have the right to be defended in our workplace,’” Vasquez said. “It ‘creates a space for more transparency, which we don’t have right now, and better pay for us.’  ‘It gives us more collective bargaining power, which would really distribute power, so that it’s not only the people at the top that are making decisions.’  ‘Everyone will have a voice.’  ‘Everyone will be protected.’”