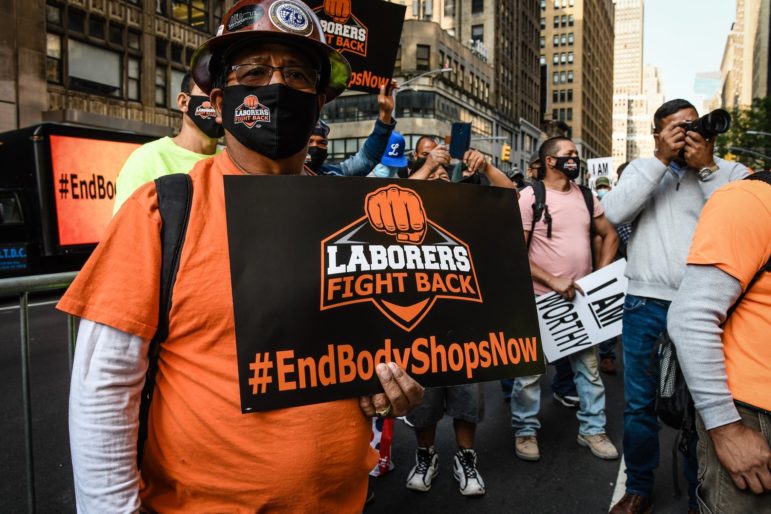 WNYLaborToday.com Editor’s Note: Mass incarceration of Black and Brown Communities has led to an ever growing labor pool of vulnerable, disadvantaged and discriminated-against Workers.  Labor brokers known as Body Shops prey on people returning home and leverage Workers' parole mandates of maintaining employment as a condition of their release.  These Body Shops take advantage of the scarcity of job opportunities available to formerly incarcerated New Yorkers.  No contractor or developer should be allowed to condemn Black and Brown Construction Workers to economic imprisonment and bodily harm. That’s re-sentencing, not real re-entry.  Laborers Local 79 and the Mason Tenders’ District Council have launched Laborers Fight Back to address the rampant exploitation of justice affected Laborers in the New York City Construction Industry.  Formerly incarcerated New Yorkers are told that in order to survive life after prison, they must accept dangerous, low-wage construction jobs.  Local 79 is fighting against exploitation and to increase career opportunities in the Union Construction Industry for formerly incarcerated New Yorkers.  New York City must regulate and license Body Shops to stop the exploitation of formerly incarcerated Workers.  Real re-entry means real economic security.  Click here to learn more, sign up for updates and to tell the New York City Council to #EndBodyShopsNow!

The work done by Black People like me has long been treated as unworthy of a fair wage.

Racial income disparities mean we are paid less, including when we do the same jobs as White People.

What deserves more attention, though, is how these disparities are taking on new and alarming forms in the construction industry here in New York City.

It’s not enough to say Black Lives Matter, especially for those of us who are formerly incarcerated Construction Workers building a future for this city amid the COVID-19 Pandemic.

The next mayor and City Council must show with action, not simply words, how they will make Black lives better and create more pathways to the Middle Class for Black New Yorkers who perform some of the most dangerous and exploitive jobs in the whole city.

Many thousands of Black New Yorkers who served time in prison are right now trying to re-enter the economy and make a positive contribution to the neighborhoods where we live and build.

Non-Union construction is one of the few industries where we can find jobs after incarceration.

We must maintain employment as a condition of parole or go back to prison.

That work requirement makes us especially vulnerable to exploitation by the labor brokers who sell our bodies for low-wages to New York City developers and contractors.

Real estate developers have a name for the subcontractors who provide our Black Labor: Body Shops.

Body Shops get rich by typically charging a developer about $40 an hour for the work of a Black Laborer who may be paid as little as $15.

And they reveal how much the real estate development world is willing to degrade and dehumanize us.

To Continue Reading This Labor Perspective, Go To: https://citylimits.org/2021/02/12/opinion-how-nycs-leaders-can-empower-black-re-entry-workers-like-me/?fbclid=IwAR3KWluAWV9bHJTwcKSuvA65Z9F0WjLU6VhNSP1JF_3IB7WjZ0szUkCKJp0