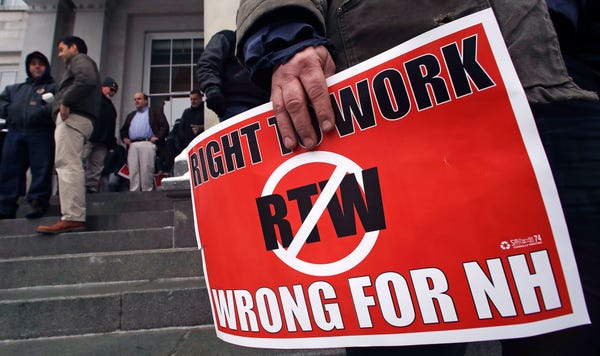 (CONCORD, NEW HAMPSHIRE) - The New Hampshire Senate narrowly voted late last week to pass a Bill that would make it the first state in the Northeast to outlaw the Union Shop.

The New Hampshire Right to Work Act, approved by a 13-to-11 margin, would void all Union Shop Contracts in the state, making it a misdemeanor for Collective Bargaining Agreements to require Employees to join a Labor Union or pay fees to one.

It would also bar employers from deducting Union Dues or Union Fees from paychecks without the written consent of the Worker.

The vote was along party lines, except for Senator Sharon Carson (Republican-Londonderry) who voted no.

“There is no call for it in New Hampshire,” state AFL-CIO President Glenn Brackett told LaborPress before the vote. “It’s all special-interest money.”

At the Senate Commerce Committee’s hearing on the Bill on January 26th, he added, 75 witnesses testified against it - and only four in favor.

Of those four, only two were local - the representatives from the Business and Industry Association (the state’s Chamber of Commerce) and the state affiliate of the National Right to Work (NRTW) Committee.

The other two were from NRTW’s National Office and Americans for Prosperity.

Workers in states with Union Shop bans on average make $8,500 a year less than they do in New Hampshire, the State AFL-CIO says, and their risk of dying on the job is more than three times as high.

Similar measures have been introduced annually in the General Court, the State’s Legislature, for almost 40 years.

One passed both houses in 2011, but was vetoed by the Governor.

Republicans recaptured both houses of the General Court last November and Governor Chris Sununu is a strong supporter of banning the Union Shop.

A victory against “forced Unionism” in New Hampshire would give Anti-Union forces a beachhead in New England and the Northeast, much as Indiana enacting its law in 2012 paved the way for Michigan, Wisconsin, West Virginia, and Kentucky to follow over the next five years.

To Read This Labor News Story In Its Entirety, Go To: www.laborpress.org/new-hampshire-senate-votes-to-ban-the-union-shop/

A sad day for the Workers in New Hampshire. Hopefully President Biden will be able to change this. Posted by Cindy Marlow on February 20, 2021 at 7:43 pm