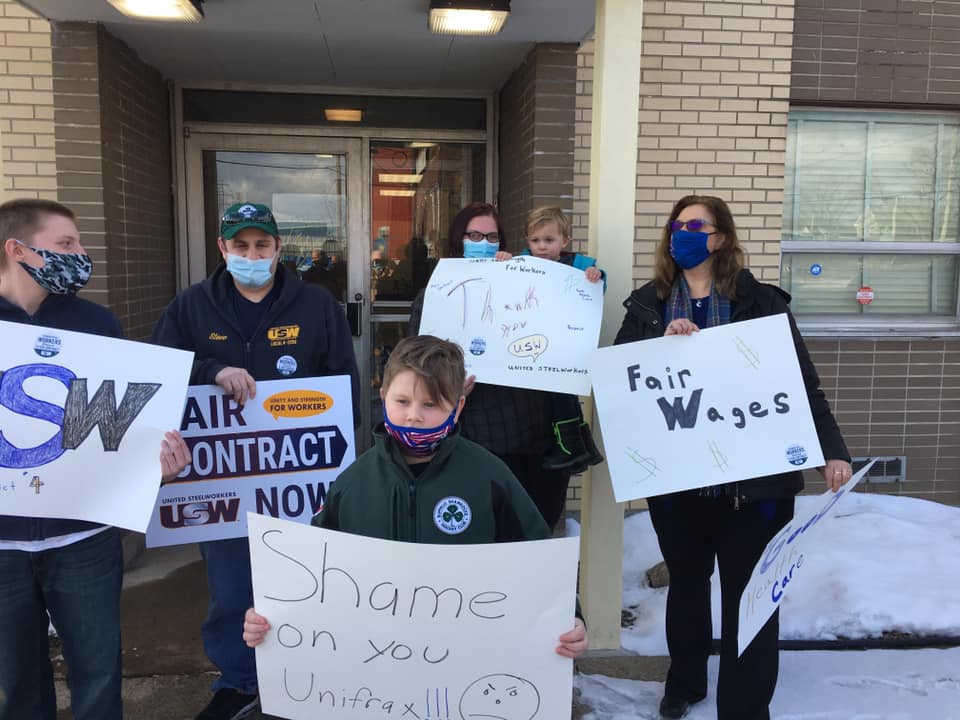 WNYLaborToday.com Editor’s Note: Pictured above, a number of Members of United Steelworkers (USW) Local 4-2058 and their young children gathered at a USW Hall in Niagara Falls earlier this week to create a series of signs that take their employer - Tonawanda-based Unifrax, to task for their lack of interest in negotiating a fair contract with their parents.  USW Officials have filed Bad Faith Bargaining Charges with the National Labor Relations Board (NLRB) against the company and are now taking their situation public in hopes of getting the manufacturer of specialty fiber and advanced materials used by the auto industry to negotiate a fair contract with their more than 200 Employees.  (WNYLaborToday.com Photos)

(NIAGARA FALLS, NEW YORK) – Across the United States during the COVID-19 Pandemic, Essential Workers have kept on working while so many others have stayed home.  They’ve worked to keep the U.S. moving, placing themselves in peril while performing their duties in all kinds of plants across this country.  And, while they’ve been hailed as heroes by many, a good portion of them are not being treated as such by their employers - who sing words of praise for them, but - in the same breath, fail to do the right thing.

Yet another case in point is the Unifrax Plant in Tonawanda, located just outside Buffalo.  There, 202 United Steelworkers (USW)-represented Employees have continued to make specialty fiber and advanced materials used by the auto industry, despite the problems brought about by the Coronavirus while working in close proximity in the manufacturing process.

Over the past 12 months, USW Local 4-2058 Representatives tell WNYLaborToday.com that at least a dozen of their Members have tested positive for COVID-19, with “some becoming pretty ill,” and another two hospitalized.  Thankfully, no one has died from the virus.

With that fear hanging over their heads, and their families, the Unifrax Workers have continued to do their jobs, despite the fact their three-year contract expired back in mid-November. 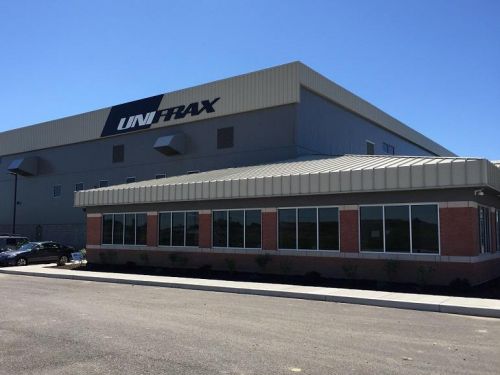 The Union, which has played a positive role in assisting the company secure low-cost hydropower and taxpayer incentives from the Erie County Industrial Development Agency (ECIDA) for upgrades and expansions over the years, is now perplexed, frustrated and angry that Unifrax is failing to negotiate a fair successor contract for their hard-working heroes.

A “best and final” offer made by the company - whose roots go back into the 1960s in Western New York, isn’t what USW Representatives are calling fair, especially in light of the fact that it would cost their Members 2.5% in lost wages over the life of the contract.

There are other matters that are unresolved too, most notably in the realm of health care where the company has offered an alternative with high deductibles, with their pensions and Unifrax looking to create a “new third-tier of wages” for incoming hires, which according to USW Sub-District 4 Director Jim Briggs would especially hurt young people who are applying for jobs at the plant.

That’s why the USW has filed charges - including bad faith bargaining, against Unifrax with the National Labor Relations Board (NLRB).

WNYLaborToday.com sat down with Local 4-2058 Representatives earlier this week at a USW Hall in Niagara Falls to talk about their contract problems at Unifrax while several of their Members and their young children worked at nearby tables, creating signage that took the company to task for their lack of interest in negotiating a fair contract with their parents. 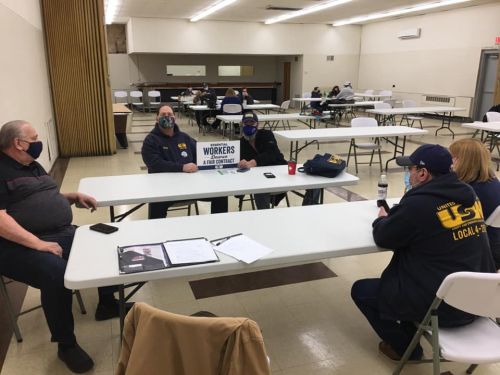 Some of those signs read: “Shame On You Unifrax!,” “Fair Contract For Our Workers,” “Fair Wages,” “Respect” and “Thank You USW.” 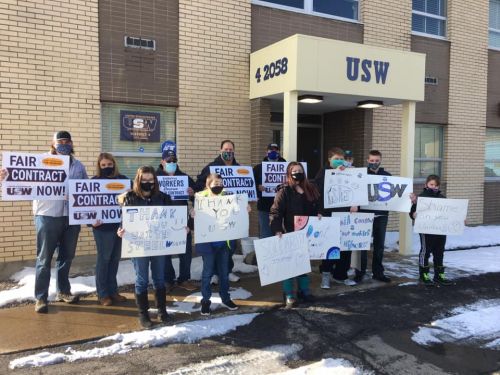 “Their ‘best and final offer’ includes ‘only two raises instead of three - which would mean our Members would lose (2.5%) over the life of the contract,’” said Briggs, who also serves as President of the Niagara-Orleans AFL-CIO Central Labor Council. 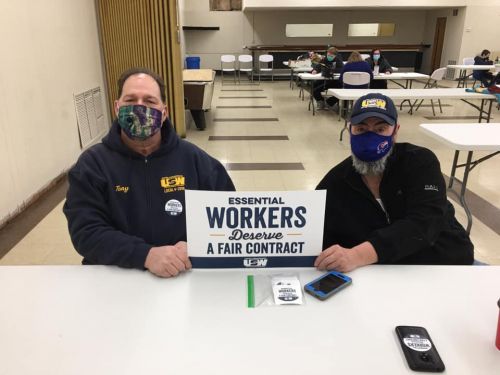 “We’re ‘trying to work with them,’” said USW Staff Representative Valerie Thomas, who said negotiations with Unifrax came to an abrupt halt in mid-January after the company made its last and final offer.  “We asked if what they’re offering ‘was due to financial hardship?’  Their answer was: ‘No,’” she said.

The negotiation process has also been made even more difficult with high turnover on the management side.  Thomas said at least two company officials, including a plant manager, recently left.  “They’re also on their ‘fifth’ human resource manager,” Thomas added.

“We’d ‘moved closer three times (during negotiations), but they never moved an inch.’  They’d say ‘this is all we are willing to pay.’  ‘This is nothing more than a race to the bottom based on their unwillingness to pay.’  ‘That’s why we’ve gone to the NLRB,’” Briggs added.

USW Local 4-2058 President Don Rice said he “feels horrible” for his Membership, who “work hard” and are “good” people.

“They ‘stepped up.’  ‘They are Essential’ Workers, but Unifrax ‘doesn’t seem to care.’  ‘The company doesn’t recognize that’,” Rice said.

Anthoni DeGregory, a Millwright who’s worked 16 years at Unifrax, said he and his fellow Workers “won’t stand for this.”

“Seventy-five to eighty-percent of our Workers ‘have families.’  ‘They have a lot of obligations and concerns,’” said DeGregory, who also serves as Financial Secretary of Local 4-2058.

James Thompson has worked for the past 17 years at Unifrax and is a Production Operator.  He’s also a Committee Chairman with Local 4-2058.

“Our Members ‘aren’t happy.’  ‘They’re worried about their medical coverage and about their wages.’  ‘They haven’t got a raise and they’ve received nothing more in their pensions.’  ‘All this’ while the company’s engineers ‘have been working from home.’  Our Members ‘are supporting the Union in what we’re trying to get done.’  We’re doing some things inside the plant to bring attention to our problem and we’ve had signs and stickers made that read ‘Essential Workers Deserve A Fair Contract,’” Thompson said. 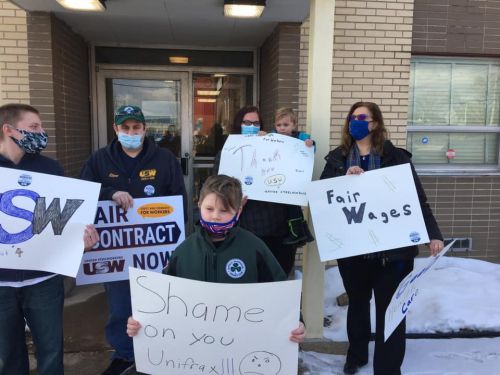 Rubbing salt into the wound is the fact the USW has stood up for Unifrax in the past when the ECIDA was looking to levy a hefty fine against the company in the wake of it not keeping promises to create a certain number of jobs after receiving financial help from the IDA.

“They ‘took’ taxpayer money ‘and now they don’t want to pay’ (their Workers),” Briggs said.  “We’ll ‘continue’ to (try to) bargain a fair contract, but this company got assistance from the ECIDA and New York State in terms of low-cost power ‘in exchange for promises made.’  ‘Some of that money came from our Members’ taxes.’  ‘So, Unifrax is willing to take our Members’ money, but not support them.’  ‘This is simple fairness.’”