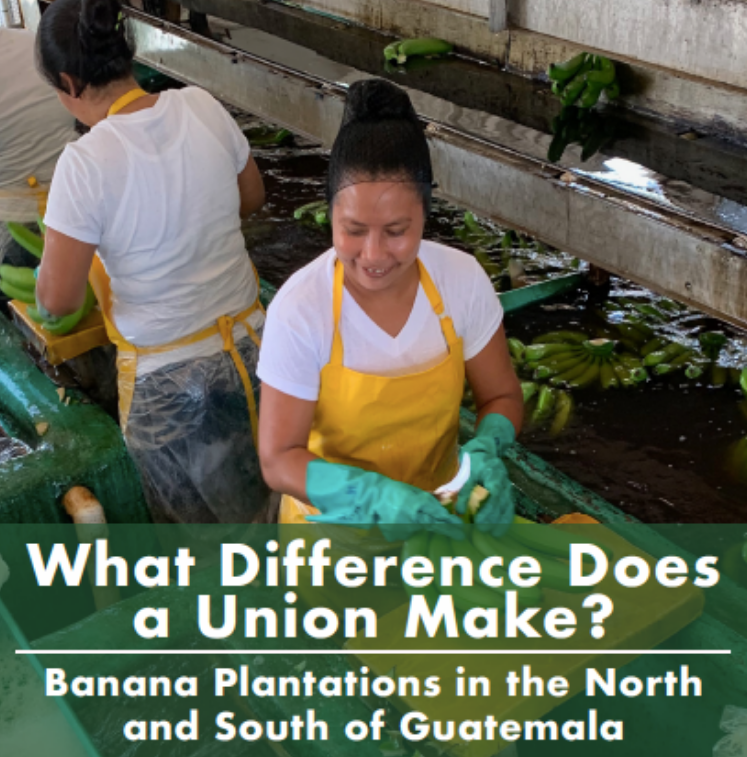 (STATE COLLEGE, PENNSYLVANIA) - A new report – What Difference Does a Union Make?: Banana Plantations in the North and South of Guatemala, published by the Center for Global Workers Rights at Penn State University, illustrates the stark difference in pay and working conditions for Union and Non-Union Workers in the Guatemalan Banana Industry.

Guatemala is currently the third-largest exporting country of bananas in the world and by far the largest exporter of bananas to North America, with two exporting areas: One on the southern Pacific Coast, which is Non-Unionized and represents 85% of employment in the sector; and the other in the north where nearly all Workers employed in banana plantations are Unionized.

Northern Guatemala is also home to one of the stronger Unions in region, Sitrabi, which represents Del Monte Workers, whilst other Unions represent Chiquita Workers in the same Caribbean coastal area.

The Penn State University-authored report is based upon a survey of more than 200 Workers (34% of them women), as well as extensive interviews, an examination of trade data and a review of relevant prior research.

All of the above Labor Rights violations take place at enterprises that are inspected by private certification programs, including Global G.A.P. and Rainforest Alliance.

At 25.5% of Unionized workplaces and 85.9% of Non-Union workplaces, management tells Workers what to say to the Certification Inspectors before the Inspectors arrive.

These differences have also been reflected in COVID-19 provisions: In Unionized plantations, for example, better physical distancing, worker transport and hygiene training have been negotiated with management, whilst relatively little protection has been provided in Non-Unionized plantations.

Guatemala has a long history of Union repression, which has been very violent.

The country regularly ranks among the most dangerous countries in the world for Trade Unionists, and the report identifies that from 2004 to 2018, 101 Unionists were killed, many in the banana growing regions.

Many of the killings have remained unpunished and barely investigated.

The clearest conclusion from the author of the report is that Unionization makes an enormous difference in Workers’ living standards and the conditions of Labor.

To Continue Reading This Labor News Story, Go To: www.bananalink.org.uk/news/trade-unions-make-a-big-difference-for-guatemalan-banana-workers/