âIf Young People Knew This, Then Theyâd Be More Likely To Consider It As An Optionâ - Women In Skilled Trades Are Driving A Tradesperson Renaissance 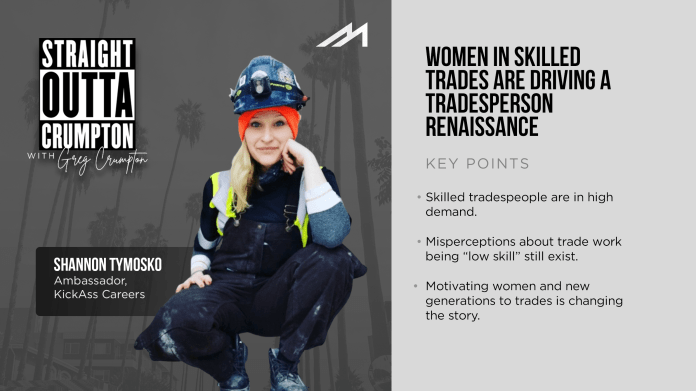 MarketScale.com Editor’s Note: Each week on Straight Outta Crumpton, Greg Crumpton dives into the lost art of networking and speaks with the biggest influencers in business services to learn how they build, nurture and value their professional relationships.

The Skilled Trades certainly don’t get the respect or attention they deserve.

In fact, there’s a shortage of Tradespeople to do these essential jobs.

However, new programs are shining a light on this and encouraging women into the fields. including Electrical Apprentice Shannon Tymosko, an Ambassador for KickAss Careers.

Tymosko explained her work with the organization: “As an ambassador, I’m an advocate for Skilled Trades.  This was a second career for me, but it’s never too late to make a change to something you enjoy.”

Tymosko’s journey to Electrician has been unconventional.

She spent 10 years in a professional career, but felt unfilled.

“I was looking for other jobs and found this Apprentice Program for women.  Through the program, I met Jamie, and it was inspiring to see a real woman in the field,” she noted.

As an ambassador and passionate supporter of the Building Trades, Tymosko talked about the misperceptions: “People think it’s for the uneducated or those that can’t cut in university.  That’s not true.  You go to school and experience what it’s like to be an Electrician.  It’s a myth that it’s not for smart people.  You can also make good money.”

One thing that also stands out in talking to young people is that trade schools, at least in Canada, don’t require accumulating debt - Tymosko’s employer pays for her to go to school.

“If young people knew this, then they’d be more likely to consider it as an option,” she added.

To Directly Access To This Apprenticeship And Training Labor News Story & To Hear More Of It By Listening To The Episode, Go To: https://marketscale.com/industries/business-services/women-in-skilled-trades-are-driving-a-tradesperson-renaissance/