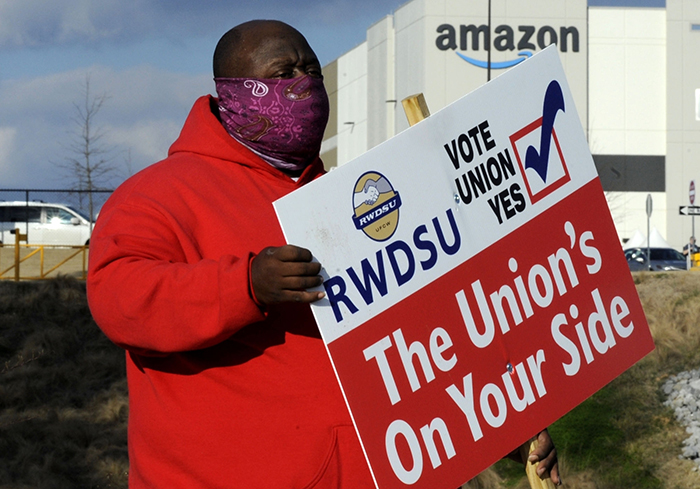 (WASHINGTON, D.C.) - The White House and the Labor Leaders connected with the Retail, Wholesale & Department Store Union (RWDSU) have discussed the group’s effort to Unionize an Amazon Fulfillment Center in Alabama, an RWDSU official said.

Amazon, America’s second-biggest private employer behind Walmart, does not have any Union-represented labor in the United States and Workers at its Bessemer, Alabama facility would be the first to join if they vote in favor.

The last attempt by Amazon Workers to Unionize was in 2014.

A White House spokeswoman, who declined to comment directly on the Alabama effort, said President Biden supports Union Organizing and collective bargaining and has urged employers not to run Anti-Union Campaigns or interfere with organizing and bargaining.

Biden has also called for holding employers accountable and increasing penalties when they do, she added.

RWDSU President Stuart Appelbaum told Reuters the conversation with a top advisor to President Biden took place after the inauguration and focused on their efforts to organize the facility in Alabama: “We wanted to inform the White House that this campaign was taking place and that they would be hearing about it.  We did not make any specific request.”

Appelbaum added the Biden advisor was interested in learning more about the situation in Alabama.

Appelbaum said Labor Leaders “connected to the RWDSU” spoke to the White House, but he declined to name who they spoke with.

He also said another Senior Advisor to Biden has been tracking the Alabama effort.

“The larger Labor Movement has indicated to the White House that this is an important campaign, that this is a priority,” Appelbaum said.

On Monday (February 8th), the National Labor Relations Board (NLRB) will mail ballots to 5,805 Workers at the facility near Birmingham, who will then have seven weeks to decide whether they want the RWDSU to represent them.

The effort to secure White House support by Labor Leaders underscores the high stakes involved, as Amazon fights its biggest Labor Battle yet in the United States.

A victory for the Union could encourage Workers attempting to organize at other Amazon facilities.

Amazon has long avoided Unionization and it has trained managers to spot organizing activity.

The COVID pandemic spurred Labor Organizing in different parts of the company and the world’s largest on-line retailer has faced a barrage of criticism over its handling of a Coronavirus outbreak at its warehouses and other facilities.

To Read This Exclusive Reuters Story In Its Entirety, Go To: www.reuters.com/article/us-usa-biden-amazon-com-labor-exclusive/exclusive-white-house-pulled-into-unionization-effort-at-amazon-facility-idUSKBN2A41NJ