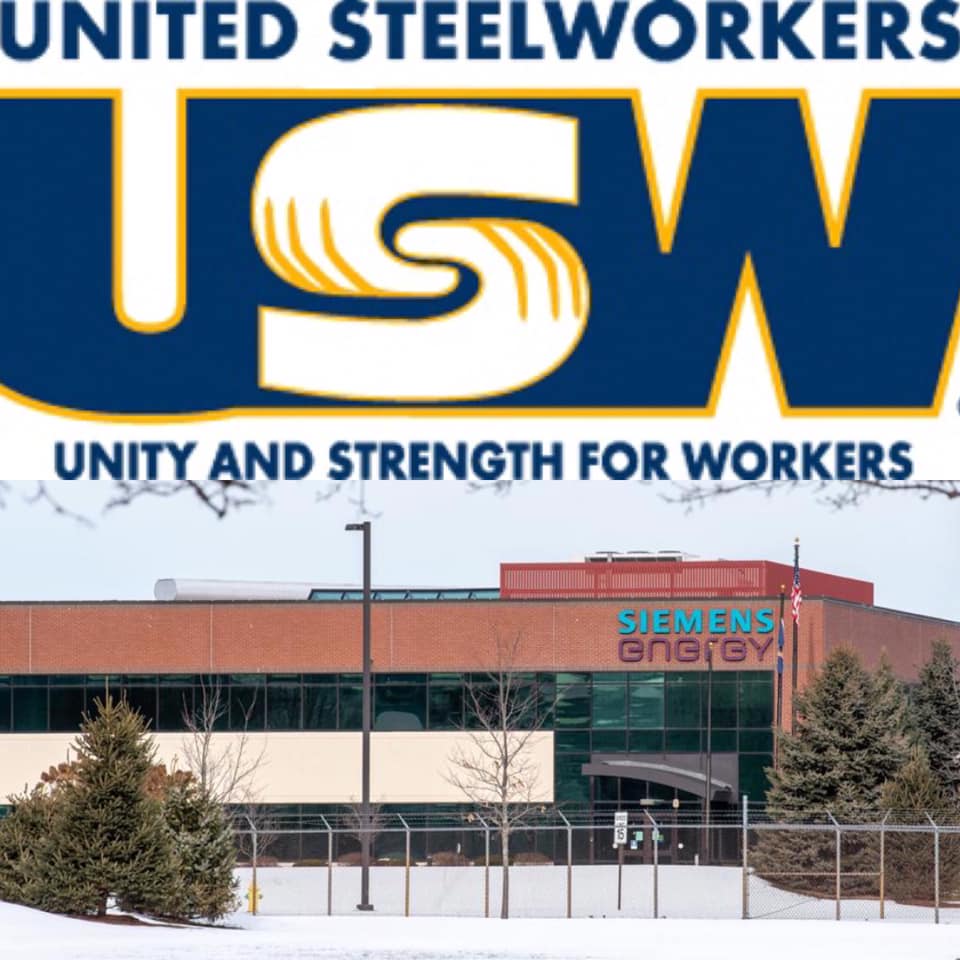 (OLEAN, NEW YORK) – The United Steelworkers (USW) and the New York State AFL-CIO are condemning Siemens Energy's announced plan to stop production at the Dresser-Rand site in North Olean and lay off hundreds of Workers, including more than 350 Members of USW Local 4601.

USW District 4 Director Del Vitale called Siemens decision disrespectful to generations of Workers who dedicated their careers to the company and to the community which has supported it: “With almost (110) years of manufacturing history at stake, Siemens unilaterally determined our jobs and our community are expendable without consulting workers or notifying the Union.  We must urge management to reverse its catastrophic course.”

New York State AFL-CIO President Mario Cilento issued the following statement: The lives of hundreds of dedicated Employees, their families, and an entire community has been upended by the callous decision of Siemens Energy to dramatically reduce the workforce at its Dresser-Rand facility in Olean.  The fact the company did not even sit down with Workers or consult with the Union before announcing the elimination of hundreds of jobs is unconscionable and frankly, unacceptable.  Shame on Siemens Energy for turning its back on the very people who have supported them for so many years.  The men and women who built the company deserve better. USW has the full resources of the New York State AFL-CIO in their fight for respect, dignity, and justice.

Meanwhile, USW District 4 Director Vitale said that the USW would demand to negotiate over the company’s decision - and if necessary, the effects of a closure: “This plant supported our families and sustained this community for over one hundred years, and Siemens owes the Workers in Olean more consideration than it has given.  We will stand together to fight for respect and dignity for the men and women who built the company.”

USW International Secretary Treasurer John Shinn, who represents the Union on the North American Siemens Labor Steering Committee, challenged the company for cutting Employees' voices out of the decision-making process: “We're outraged that the USW was neither notified in advance nor offered an opportunity to meet with Siemens to discuss alternatives in Olean.  We will stay united throughout this process, and our solidarity will be our best hope to preserve fairness and justice for Workers and their families.”

The Olean Times Herald reported that more than 100 years of continuous heavy manufacturing will come to a close in North Olean within the next year as Siemens Energy Officials report more than 500 Employees will be affected by moving production to other facilities.

Of the affected Employees - who were notified of the decision at a town hall-style meeting earlier this week - company officials told The Times Herald around 100 jobs will be transferred to other facilities, including Siemen's operations in nearby Painted Post, while around 430 will be laid off.

Of the total jobs affected, around 485 are manufacturing positions.

The separations and transfers are to be phased in through mid-2022.

Of the Employees remaining, about 75 are connected to the steam turbine business that transferred to Olean after Curtiss-Wright purchased and closed the Wellsville facility.

The USW represents 850,000 Members who are employed in manufacturing, metals, mining, pulp and paper, rubber, chemicals, glass, auto supply and the energy-producing industries, along with a growing number of workers in public sector, service, tech and academic occupations.

For More On This Labor News Story, Go To: www.usw.org/news/media-center/releases/2021/usw-condemns-siemens-plans-for-olean-dresser-rand-facility And www.oleantimesherald.com/news/siemens-energy-downsizing-olean-operation-530-of-860-jobs-affected/article_6613c5e7-3595-526c-a5a7-1ce0039f2e16.html