âCould You Live Off Our Rate Of Pay?â - âFrustratedâ Buffalo Public School Custodians, Who Are Fighting COVID To Protect Schoolchildren, Have Been Without A Contract For 10 Years & Make A âDisgustingâ $12.17 An Hour, Less Than The NYS Minimum Wage 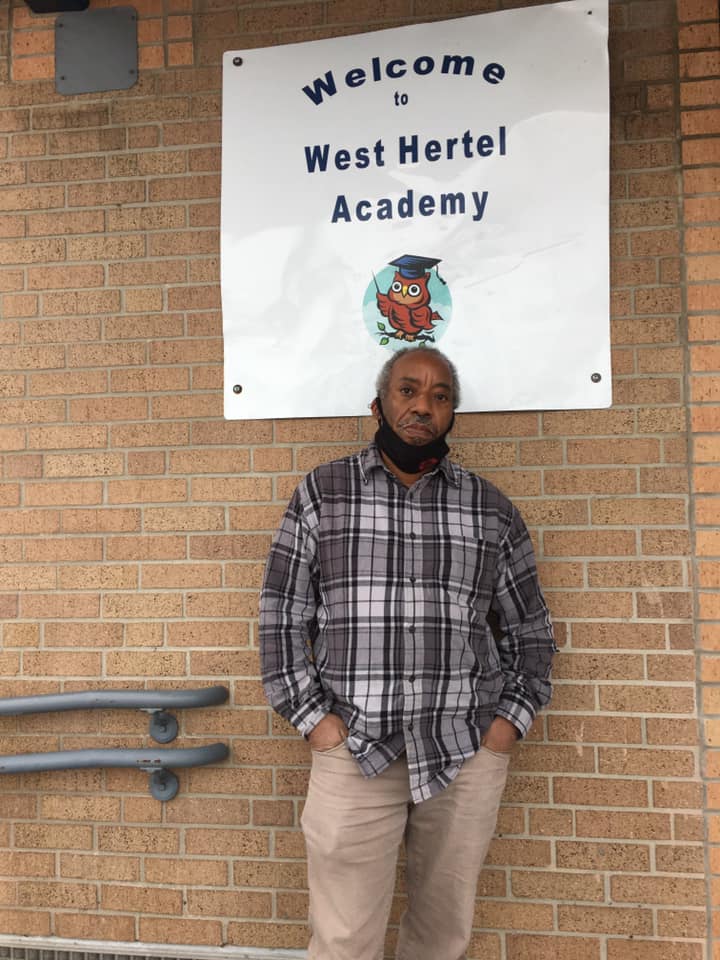 WNYLaborToday.com Editor’s Note: Pictured above, frustrated and unhappy West Hertel Academy Custodian Bob Harrell has not had a raise in 10 years and makes just $12.17 an hour, less than the present $12.50 New York State Minimum Wage.  Harrell’s Union - International Union of Operating Engineers (IUOE) Local 17, is attempting to start negotiations on a new contract, but has had little luck with the Buffalo School Engineers Association (BSEA), the Buffalo Public School District and the Buffalo Board of Education over the years.  Harrell and his Union are hoping that by going public, the community will stand up and call for new contract talks to begin for the 200-plus IUOE-represented Custodians who are employed at 80 Buffalo Public Schools - and who will be putting their lives on the line to keep schoolchildren safe when they return to their classrooms in early February.  (WNYLaborToday.com Photo)

(BUFFALO, NEW YORK) – Tim Brown is 58.  Bob Harrell is 63.  Both are Custodians employed at Buffalo Public Schools, working hard to make sure Schoolchildren are safe from the Coronavirus when they return to their classrooms during the first week of February.

Both are African-American and are part of a group of more than 200 Unionized Buffalo Public School Custodians who have been working without a contract for 10 years now and make what many could only describe as a disgusting $12.17 an hour - less than the present $12.50 New York State Minimum Wage.

Both perform a multitude of jobs - not just the “mop swinging” that too many of us unfortunately stereotype when the words School Custodian are mentioned.

From outdoor snowplowing, grass-cutting and landscaping to indoor sweeping, mopping and the cleaning of classrooms and lavatories to cleaning up the vomit and accidental excretions of students during the school year, these two men are grand examples of Essential/Front Line Workers being taken for granted by their employer and, unfortunately, the community.

Harrell, Brown and the other Custodians who work at the 80 Buffalo Public Schools in the city are represented by International Union of Operating Engineers (IUOE) Local 17.

They say they “deserve a raise, because we keep our buildings very clean.”

“We ‘bend over backwards.’  We put the (School) Staff, Administration and kids ‘first,’” Harrell told WNYLaborToday.com in an emotional interview this week.  “I ‘feel good about my job’.  ‘I feel I make a difference.’  ‘But we’re also putting our lives on the line.’”

Harrell, who’s worked as a Buffalo Schools Custodian for the past 34 years, tested positive for COVID-19, along with his 88-year-old mother, several weeks ago.  He quarantined for 10 days and never showed any symptoms of the Coronavirus.  Neither did his mother, he said.

Brown, a Maintenance Custodian for the past 25 years, told Your On-Line Labor Newspaper that he knows the dangers of the Coronavirus, but proudly says: “I ‘signed up for this job.’  ‘I’m not mad at all (of the circumstances he is being forced to work under without a contract), because I love what I do.’  ‘I’m not worried that I won’t be able to do my job.’  ‘But the fact remains, there will be COVID cases in Buffalo’s schools.’  ‘It’s just a matter of time, absolutely.’”

IUOE Local 17 Business Manager Gary Swain (pictured below with Harrell outside the West Hertel Academy/WNYLaborToday.com Photo) is more than frustrated and disappointed that the Buffalo School Engineers Association (BSEA), the Buffalo Public School District and the Board of Education has forsaken this group of very important Employees who help protect our most valued commodity, our children. 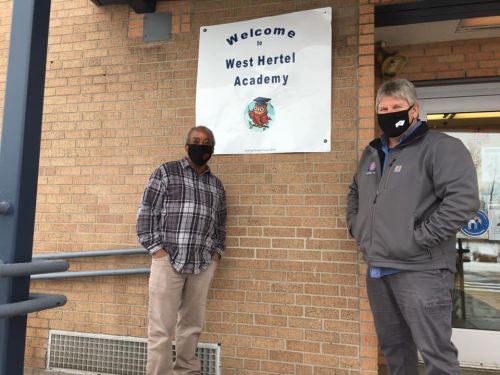 For the past four years, his “off-and-on” inquiries and attempts to start negotiations on a new contract have failed, he told Your On-Line Labor Newspaper.

Ten years is way too long for any employer to ignore and fail to negotiate a new contract with their Custodians - and it is more than disgusting that these individuals are paid a paltry $12.17-an-hour an hour when the State Minimum Wage just rose to $12.50-an-hour on December 31st (2020).

We represent the more than 200 Custodian Workers within the Buffalo Public Schools.

I am writing you, looking for some guidance/help with an issue that I have inherited.

Local 17 Members have been working under the same contract for over 10 years without a raise, current wage is $12.17 per hour.

Most of the Custodians stay because of the health care benefits and close proximity of their homes.

Our contract, like that of the Teachers (represented by the Buffalo Teachers Federation), was held up during the period of the (Buffalo) control board, which was finally settled.

We were hoping that the Buffalo School Engineers Association (BSEA) contract would be next, and then of course we would negotiate our contract.

With each passing month I would tell our Members to be patient, our turn will come.

This has been going on for at least two years now and I’m a bit discouraged.

I am open to any ideas that you may have, including an open dialogue with all parties necessary.

In a second correspondence, Swain wrote:

I read the Buffalo News article in this morning’s paper, I stop and wonder why is it that everyone will expect the Custodians to undertake such a task of keeping our schools clean during this pandemic when they themselves have been working without any pay raise for more than 10+ years.

Their current pay is $12.17 per hour with less than a dollar per hour in retirement benefits and of course, health care.

As you know our city has joined the state’s plan for a Minimum Wage of at least $15 per hour, and still, our Custodians make considerable less.

They are now expected to deep clean the schools every day and expose themselves to the hazards that are presented from COVID-19.

I would like to set up a meeting with you to discuss ways to move forward.

Contract negotiations have stalled and there needs to be a solution.

I think we can agree that the safety and productivity of our Custodians is of the utmost importance to any reopening plan, and a representative from Local 17 should be involved in the conversation.

But, to date, there has been no action taken by the any of those entities as a result of Swain’s correspondence.

“I ‘do not know why, but they are not in a hurry to take care of this, even in a pandemic,’” Swain tells WNYLaborToday.com.  “We’re still working under an open 2011 contract ‘with no end in sight.’  Our Members clean (80) Buffalo Schools ‘and we are tired of waiting.’  ‘No one from the District has reached out to us.’  (Dr. Kriner) Cash ‘goes on’ about their reopening plan (for early February) ‘and the intensive cleaning it will take, no matter how hazardous it is to our Members.’  While I’ve had ‘some’ response from their attorneys, ‘the door has been slammed on me.’  ‘This is unethical.’  My Members ‘are working and the only reason they stay is because of the health care benefits they get.’  The City of Buffalo has come out with a ($15-an-hour Minimum Wage).  ‘It would be the right thing to do’ (to start with for the Public School Custodians).  ‘But there not and when others get that ($15), it’s like rubbing salt in an open wound.’  (The Custodians) ‘are heroes.’  ‘They keep our schools safe for our kids, but they don’t want to pay for that.’”

Brown has a hard time swallowing the fact he and other Custodians have not gotten an increase in pay over the years for the work that they do.

“In all the years I’ve worked, ‘I’ve never made a different amount of money,’” he told WNYLaborToday.com.  “Now, the kids are coming back ‘and we have to make it safe for them.’”

Harrell told Your On-Line Labor Newspaper that he “would appreciate” a raise in a “show of appreciation” for what the Custodians do, but then again, the decisions are “being made by people with Bachelor of Arts Degrees and Doctorate Degrees” - people who cannot relate to the job duties that Brown, Harrell and the rest of the more than 200 Custodians are responsible for.

“(Custodians) ‘are never mentioned’ in any school story that I read in the newspaper ‘when they talk about reopening schools and making it safe for the kids, Teachers, Principals and Staff.’  ‘It’s like we’re not even here,’” Harrell said.

Harrell went one step further, taking the time to call WNYLaborToday.com back after the interview was over to add he would like to ask every decision-maker in the Buffalo Public School District who would be responsible for negotiating a new Custodial contract this question: “Could you live off the rate of pay that I make every day?” 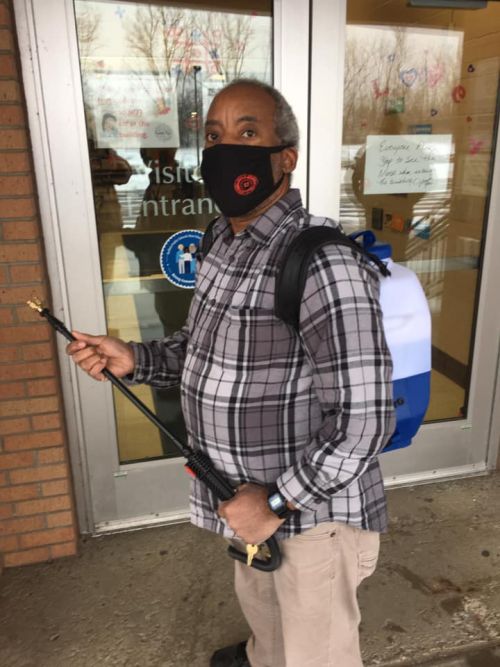 Harrell, who showed WNYLaborToday.com the disinfecting system filled with hospital-grade disinfectant that he straps on to his back (Pictured Above/WNYLaborToday.com Photo) for use throughout the school, takes home - after taxes, $787 every two weeks, without overtime.

“I get paid every two weeks.  I would ask them: ‘Could you survive on this?.” he said.

It’s a good question to ask and maybe those Buffalo Schools decision-makers responsible for a 10-year delay in negotiating a new contract with IUOE Local 17 for their Custodians should think long and hard about it - maybe even walk a day or a week in their shoes, mopping floors, cleaning bathrooms and mopping up the residue of what sick children leave behind.

Both Brown and Harrell agree that it would be a good life-lesson.