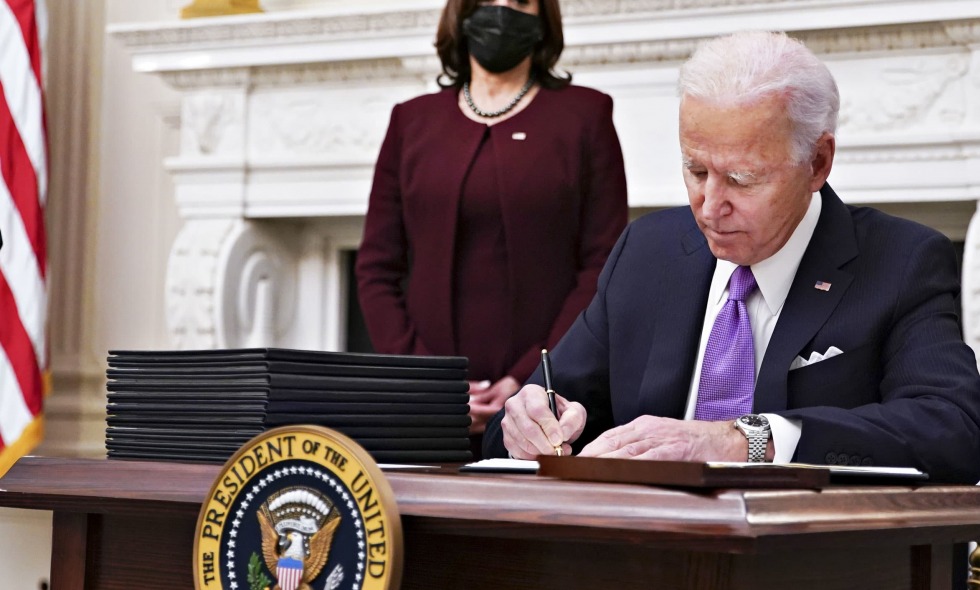 As UCOMM previously reported, in 2018 then Republican President Donald Trump issued a number of EOs that severely limited Federal Unions' ability to protect their Members, subverted Collective Bargaining Agreements (CBAs), and even kicked some Locals out of their offices in Federal buildings.

Then in October, Trump signed an EO that created a new job classification within the government’s Career Civil Service called Schedule F for “Employees in confidential, policy-determining, policy-making or policy-advocating positions,” and called on agencies to identify and convert eligible Employees to the new classification. Employees whose positions were converted to Schedule F lost nearly all of their Civil Service protections and could be fired without cause.  It would also have allowed Trump to place his supporters in positions within the government, although it is unclear if anyone was appointed before he left office.

Biden’s EOs rescind both the Schedule F Order and EOs from 2018.

“(Biden) is taking critical steps to protect and empower Federal Employees, who dedicate their careers to serving the American People,” the White House wrote. “They keep us healthy, safe and informed, and their work transcends partisan politics.  They are talented, hard-working and inspiring Americans, worthy of the utmost dignity and respect.  But over the last four years, they’ve been undermined and demoralized.  The President will sign an Executive Order taking steps to protect and empower Federal Employees who are so essential to this country.”

Additionally, Biden is ordering agencies to “bargain over permissible, non-mandatory subjects of bargaining when contracts are up for negotiation.”

This was something Trump had not done and became a major issue during the Coronavirus Pandemic when Unions had almost no voice in negotiating COVID Safety Procedures.

Biden also issued an EO to the Office of Personnel Management to establish a $15 minimum Wage for both Federal Workers and Federal contractors.

Biden also announced some selections to important agencies that deal with Organized Labor.

For the Equal Employment Opportunity Commission (EEOC) he promoted Board Members Charlotte Burrows and Jocelyn Samuels to serve as Chair and Vice-Chair.

He also made Ernest Dubester Chairman for the Federal Labor Relations Authority (FLRA), which handles disputes between the government and Federal Unions.

Dubester previously worked as a Union Attorney, Legislative Counsel to the National AFL-CIO, and a Law School professor teaching collective bargaining and arbitration.

To lead OSHA, Biden selected James Frederick, who worked for 25 years for the United Steelworkers (USW) in their Health, Safety and Environment Department.

He left the Union in 2019 to become a part-time consultant for ORC HSE Strategies, a Washington-based firm that advises companies in safety compliance.

With COVID-19 raging, Frederick will be tasked with creating and implementing a COVID Worker Safety Standard.

In addition to Fredrick, Biden selected Jessica Looman to become the Deputy Administrator of the U.S. Department of Labor’s Wage and Hour Division, which is tasked with investigating cases of wage theft.

Looman was the Executive Director of the Minnesota Building and Construction Trades Council before being selected.

She has previously worked as the Deputy Commissioner of the Minnesota Department of Labor and Industry, and as the General Counsel for the Laborers District Council of Minnesota and North Dakota.

To Directly Access This Labor News Story, Go To: https://ucommblog.com/section/national-politics/biden-repeals-union-busting-executive-orders?fbclid=IwAR3Y30Ctt4VOfqc2OVPGPi-zSGGVD0QPi52Sd2EIxYObYFPIfatXupsGszw