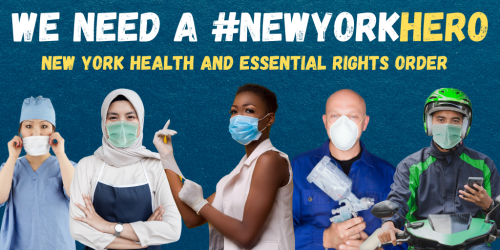 (ALBANY, NEW YORK) - The New York State Senate Labor Committee voted 10-to-1 to send a landmark COVID-Safety Bill to the floor on Tuesday (January 19th) - not a moment too soon, says the coalition advocating it.

The measure, the New York Health and Essential Rights (NY HERO) Act, would “give enforceable standards and protections to Workers across the state,” Maritza Silva-Farrell, who serves as the Executive Director of ALIGN-NY, the coalition of Unions, Worker Centers and community organizations that conceived it, told LaborPress.

She calls enacting it “a moral imperative.”

The Bill, sponsored by Senator Michael Gianaris (Democrat-Queens) and 11 others, states “there is no Federal or State Law protecting Workers from exposure to airborne infectious diseases in the workplace.”

It would order the state Department of Labor to set standards to prevent exposure to airborne infectious diseases that cover all private employers in the state.

Those standards would vary depending on the risk in different industries, but would include Employee health screenings, Personal Protective Equipment (PPE), cleaning, ventilation, social distancing and more.

The Bill would also prohibit employers from punishing Workers who refuse to work if they reasonably believe they are being exposed to an airborne infectious disease and the employer has been notified that conditions on the job might violate the state standards.

Employers could be fined at least $50 a day for failing to adopt an exposure-prevention plan, and $1,000 to $10,000 for failing to abide by the rules of a plan they’ve already adopted.

Workers could also sue on their own to force employers to comply.

On a more cooperative level, the Bill would allow Worker or Joint Employer-Employee Health and Safety Committees to be created in workplaces where there are 10 or more Employees.

“Workers are well positioned to monitor the safety and health risks in their workplace,” says the Essential Workers Coalition, the umbrella group campaigning for the Bill, especially given the limits on the State Department of Labor’s monitoring resources.

Those committees would enable Workers to speak out without being afraid, Silva-Farrell says.

The legislation would also protect employers, she adds, because the more disease spreads in workplaces, “more businesses will have to close down.”

The Assembly version of the Bill, sponsored by Karines Reyes (Democrat-Bronx), was sent to the Labor Committee Tuesday.  It has 20 co-sponsors.

Passing it is urgent, ALIGN-NY’s Lynda Nguyen said during an on-line press conference held on Thursday, because 11 months after the pandemic hit New York, Workers “still don’t have basic health and safety protections.”

“Every day ‘we risk our lives,’” Gerardo Rocha, a Food-Processing Worker in a warehouse in Goshen, told the press conference – speaking in Spanish and through an interpreter on his lunch break. “We ‘have to fight a lot with the boss to get our masks and adequate Personal Protective Equipment.’”

Rocha was one of several Workers there who contracted COVID-19.

To Continue Reading This Labor News Report, Go To: www.laborpress.org/ny-hero-act-reaches-state-senate-floor-with-moral-imperative/