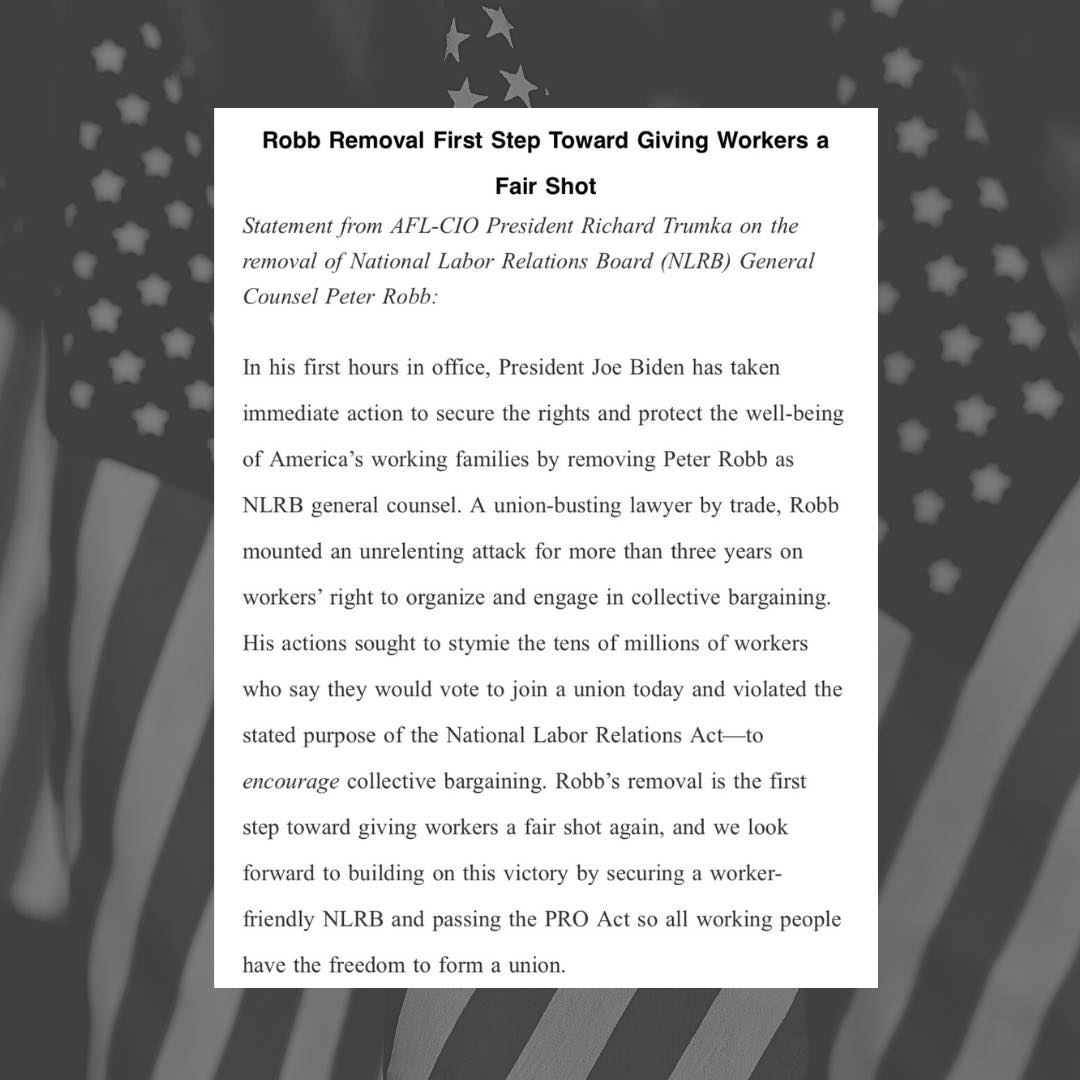 (WASHINGTON, D.C.) - President Joe Biden fired Peter Robb, the Trump-appointed General Counsel for the National Labor Relations Board (NLRB) after Robb refused a request from the new administration to resign.

The White House notified Robb of his dismissal by letter - sent minutes after Biden was sworn in Wednesday (January 20th) which specified he had until 5 p.m. to voluntarily resign or be fired, two people with knowledge of the correspondence said.

In a rebuke to the new chief executive, Robb said in a letter he wouldn’t voluntarily resign and that his removal would “permanently undermine” the work of the agency.

A White House spokesperson confirmed that Robb refused to resign and was fired.

“I respectfully decline to resign from my Senate-confirmed four-year term appointment as General Counsel of the NLRB less than 10 months before the expiration of my term,” the Labor Board’s top lawyer wrote.

The NLRB enforces Private Sector Workers’ rights to organize and its General Counsel has sweeping authority to determine which types of cases the agency does or doesn’t pursue.

His term was slated to last until this coming November, but Unions - including the Service Employees International Union (SEIU) and Communications Workers of America (CWA), urged Biden to break with precedent by forcing him out immediately, in order to begin reorienting the agency toward protecting Workers.

Also on Wednesday, the Biden Administration named Democrat Lauren McFerran to head the NLRB, replacing John Ring, the Republican Chairman since 2018 who presided over major business-friendly decisions during the Trump Administration.

McFerran, the NLRB’s sole Democrat, will still be outnumbered by Republicans, who hold a 3-1 majority on the five-member Board.

The fifth seat, reserved for a Democrat, is vacant.

Robb appears to be the first NLRB General Counsel to be forced out in more than half a century.

For Unions, Robb’s apparent removal offered reassurance Biden would live up to his pledge to fully support Labor.

Union allies began calling for the General Counsel’s ouster only days after the November election, pointing to the attorney’s record of siding with employers in key cases and efforts to rein in the agency’s regional offices.

“He has been a ‘toxic figure’ in the NLRB,” said U.S. Representative Andy Levin (Democrat-Michigan), who serves as Vice Chair of the House Education and Labor Committee. “He has ‘worked to undermine its mission.’”

To Read This Labor News Story In Its Entirety, Go To: https://news.bloomberglaw.com/daily-labor-report/biden-moves-to-oust-top-labor-board-attorney-robb?fbclid=IwAR0DKaFkiBmSHP7UVsUdIlxvS8uarwA9Ty7bXsDJoAa2FT364P19lmRsU4U