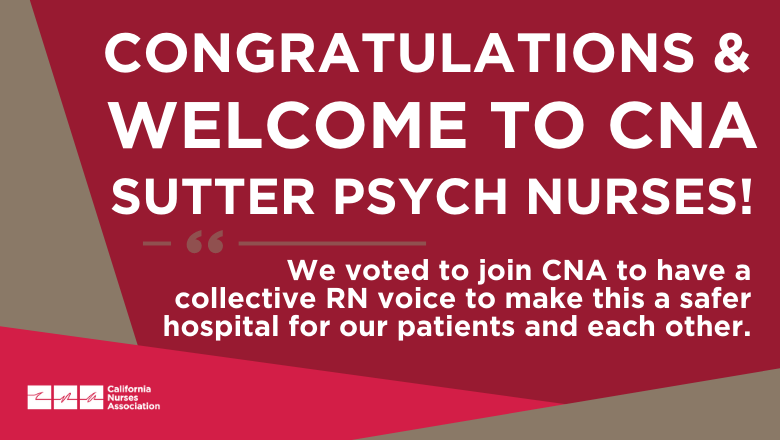 CNA now will represent roughly 100 Nurses in bargaining with Sutter Health for a new contract at the hospital.

The Sutter Nurses voted 62-to-13 via mail-in ballots in a Union Election run by the National Labor Relations Board (NLRB).

In the Sacramento Region, the CNA already represents Sutter RNs at the company’s Roseville Medical Center, as well as at Sutter Auburn Faith Hospital and Hospice.

“We want a voice in staffing and scheduling,” Sutter Psych RNs Anna Ramahl and Tarra Martine said in a news release. “It’s our job to advocate for our patients and we are excited to do that through our Union.”

Also in the release, Sutter Psych RN Frank Mitchell said he welcomed the chance to push for safer policies around COVID-19 and other infectious diseases, especially as it relates to adequate and accessible Personal Protective Equipment (PPE).

The Coronavirus Pandemic has united RNs and many other Health Care Workers nationwide around concerns about adequate staffing and protective equipment.

The CNA represents around 100,000 RNs in the Golden State and it has worked closely with its affiliate, the 150,000-strong National Nurses Association, to lobby statehouses and the U.S. Congress for protections.

At Adventist Health and Rideout, CNA members said their new contract improved health and safety provisions relating to the pandemic and patient safety.

It also expanded protections for RN’s against potential workplace violence and secured increases in pay and the employer-sponsored 401(k) plan.

“Even though bargaining was done virtually due to the pandemic, we still remained just as steadfast and came out on the other side with a contract that benefits Nurses and our patients,” said Andrew Holley, an RN employed in Rideout’s Emergency Department.