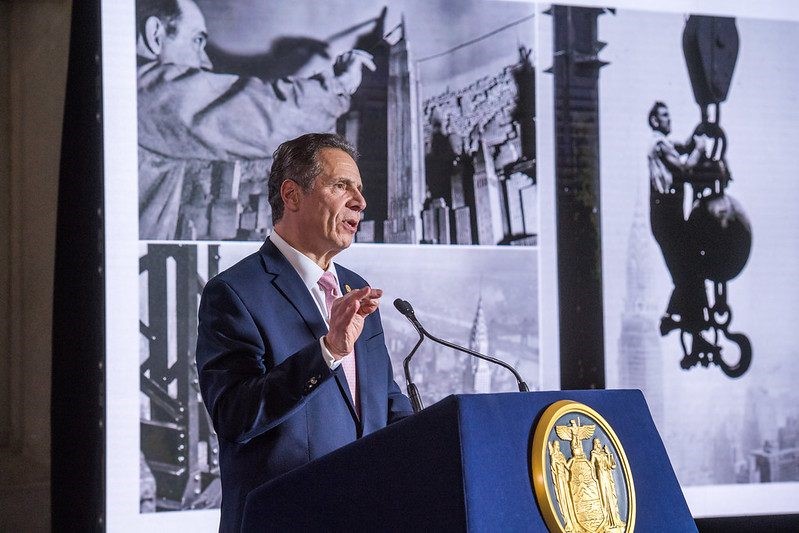 The proposals he broadly outlined Thursday (January 14th) are heavily focused on New York City, and lacking in details on who’d pick up the tab, though he said he expected to work with President-elect Joe Biden, a supporter of infrastructure improvement.

“While history has described the physical and economic benefits of public investment, there has been less discussion of the ancillary benefits,” Cuomo said. “Building new projects, enhancing day-to-day life, seeing progress, also lifts people’s spirits.  Increasing belief in the future increases consumer and investor confidence, and in and of itself stimulates the economy.”

He cast the plan in the visionary mold of the Erie Canal, which opened the interior of the North American Continent to commerce and settlement.

This huge new infrastructure plan is ideally suited to New York and stands in contrast to a Nation that has lost its ambition, Cuomo said, sounding at times like his nemesis, soon-to-be-ex Republican President Donald Trump.

“We lost sight of the connection between today’s construction and the prosperity of a thousand tomorrows.  We chose to kick the can down the road - a road that was crumbling before our eyes. But in New York, we once again took a different path.  Across the state we’re now building bigger and better and laying the foundation for our future,” he said.

The only Capital Region component of the $306 billion plan that Cuomo mentioned is the $11.4 million project to convert an underused exit ramp on Interstate 787 into an elevated linear park in Downtown Albany in partnership with the city.

The Albany Skyway will include a landscaped promenade, events space and a shared-use path connecting downtown with surrounding neighborhoods.

Like some other projects mentioned Thursday, work on it is already underway and completion is scheduled later this year.

Cuomo described the program he laid out in four stages this week as the path to a reimagined, rebuilt, renewed New York, once COVID-19 is vanquished: “Altogether, including the new airports and roads and bridges and parks and housing in every corner of the state, and the visionary new redevelopment of the West Side of Manhattan, we are expanding our infrastructure plan to invest ($306 billion) in the future of New York. That’s not just the largest infrastructure plan in New York history.  It’s the largest, most ambitious plan of any state in the Nation.  And we will make these investments at a time when the interest rates are low, when New Yorkers are looking for work, and when we can optimize the value of our investments.”

To Directly Access This Labor News Story, Go To: https://dailygazette.com/2021/01/14/cuomos-state-of-the-state-part-iv-a-306b-infrastructure-plan/