One Of Eight 2020 NALC Heroes Of The Year Awardees From Across The U.S.: Buffalo Branch 3 Member Sydney Rogers Recognized & Honored For Her Role In Helping Save A Woman Who Was Being Attacked By A Man On Her Mail Route 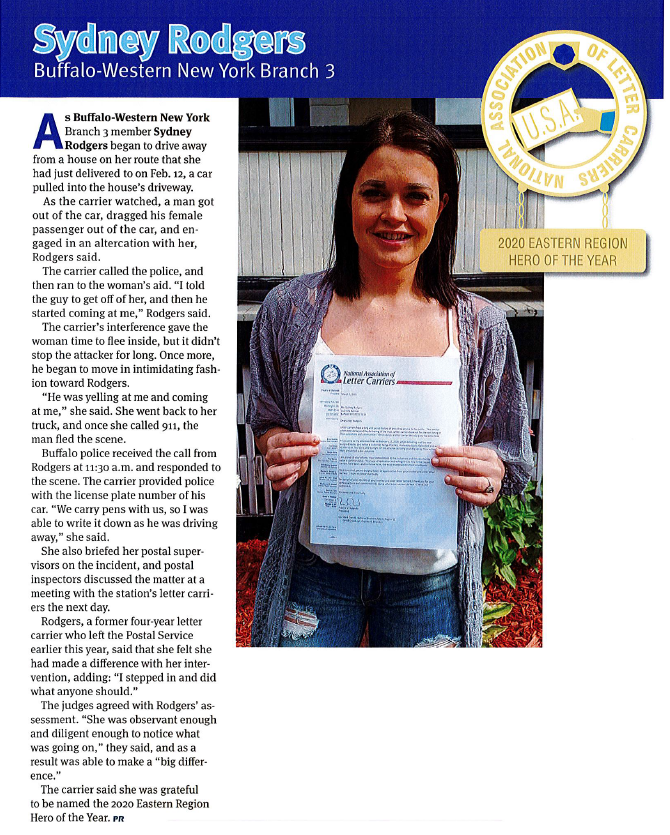 (BUFFALO, NEW YORK) – For the second year in a row, a Member of National Association of Letter Carriers (NALC) Branch 3 in Buffalo has been honored with one of the National Union’s NALC Heroes of the Year Award.

Sydney Rodgers (Pictured Above/Photo Courtesy of NALC) was recognized and honored for the role she played in helping save a woman who was being attacked by a man on her mail route.

Rodgers was one of eight heroes chosen from 100 nominees whose stores of heroism and community service were recognized over the course of 2020 by NALC.

“I’m ‘extremely proud of her,’” NALC Branch 3 President David Grosskopf, Jr. told WNYLaborToday.com.  “To ‘put herself in harm’s way when she could have just easily called (911) and left it at that - instead she physically put herself in a situation to help that woman.’  But we live in a city that’s called ‘The City of Good Neighbors’ - ‘and she did the right thing.’” 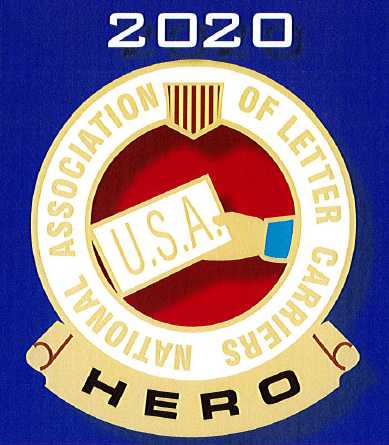 In a story published in the December issue of NALC’s The Postal Record, Rodgers said she began to drive away from a house on her route that she had just delivered to on February 12th when a car pulled into the house’s driveway.

Rodgers called the police and then ran to the woman’s aid.

“I told the guy to get off of her and then he started coming after me,” she said.

Rodgers’ interference gave the woman time to flee inside, but it didn’t stop the attacker for long.

Once more, he began to move in intimidating fashion toward Rodgers.

She went back to her mail truck to call 911 as the man fled the scene.

Buffalo Police received the call from Rodgers at 11:30 a.m. and responded to the scene.

“We carry pens with us, so I was able to write it down as he was driving away,” she said.

She also briefed her Postal Supervisors on the incident and Postal Inspectors discussed the matter at a meeting with the station’s Letter Carriers the next day.

Rodgers, a former four-year Letter Carrier who left the Postal Service earlier this year, said she felt she had made a difference with her intervention, adding: “I stepped in and did what anyone should.”

The judges agreed with Rodgers’ assessment.

“She was observant enough and diligent enough to notice what was going on,” they said and, as a result, was able to make a “big difference.”

On a daily basis, Letter Carriers assist people who need help and each year NALC highlights the special acts of courage and compassion performed by Letter Carriers who improve or save lives along their routes by choosing some of them as NALC’s Heroes of the Year.

The awards have been given out by NALC since 1974 following a review by a panel of NALC Judges.

“We are ‘immensely proud of what the eight heroes being recognized did,’” NALC President Fredric Roland said.  “They ‘represent our country’s best in public service.’  ‘They truly are our heroes.’”