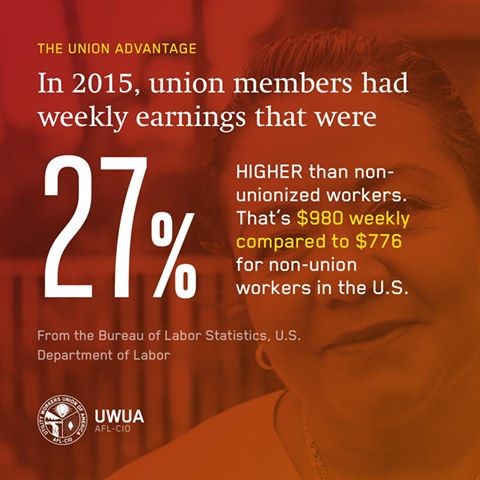 On average, Union Workers’ wages are 28% higher than their Non-Union counterparts.

If you didn’t know, a Labor Union is an organization that acts as an intermediary between its Members and the business that employ them.

Labor Unions give Workers the power to negotiate for more favorable working conditions and other benefits through collective bargaining.

And more than 84% of Union Workers have jobs that provide health insurance benefits, but only 64% of Non-Union Workers do.

Unions help employers create a more stable, productive workforce - where Workers have a say in improving their jobs.

Unions help bring Workers out of poverty and into the Middle Class.

In fact, in states where Workers don’t have Union Rights, Workers’ incomes are lower.

Today, Unions are more important to Working People than ever.

Changing technologies are revolutionizing many types of work.

Yet, Workers still require united strength to assure themselves of individual opportunity, dignity and advancement.

What happens when you deserve a raise or need a day off to take care of an unexpected emergency or your employer has sold the company or new equipment takes over your job or working conditions on the job endanger your health?

It’s usually impossible, and always difficult, for an individual Worker to go one-on-one with an employer when it’s necessary to protect your livelihood.

The president of the company may not even be located in your community.

Your supervisor knows you need to work and the supervisor has the final word.

Unions provide the responsible, united voice, which gives millions of wage and salary earners their proper share of participation in American Industrial Democracy.

Since the end of the 18th Century, American Working People have joined together in Democratic Unions to exercise a voice in their own lives and futures, in a way that individual wage earners cannot.

Union Members elect their own officers, determine their own goals, set their own dues, and choose the rules by which their Unions operate for the common good.

Collective bargaining is the heart and soul of the Labor Union.

Collective bargaining occurs when a group of people, such as the workforce at a company, bands together to increase its negotiating power.

For instance, a single Worker might feel that a certain new safety measure should be implemented in his factory, but he might have limited power to get the company to install the new measure.

If the entire workforce is made aware of the need for the new measure and bands together to pressure the company to install it, there is a much greater chance that the company will comply.

Labor Unions band Workers together, allowing the voices of individual Workers to be heard - and possibly made into a goal of the Union.

To Continue Reading This Labor News Story, Go To: https://uwua.net/why-join-a-union/