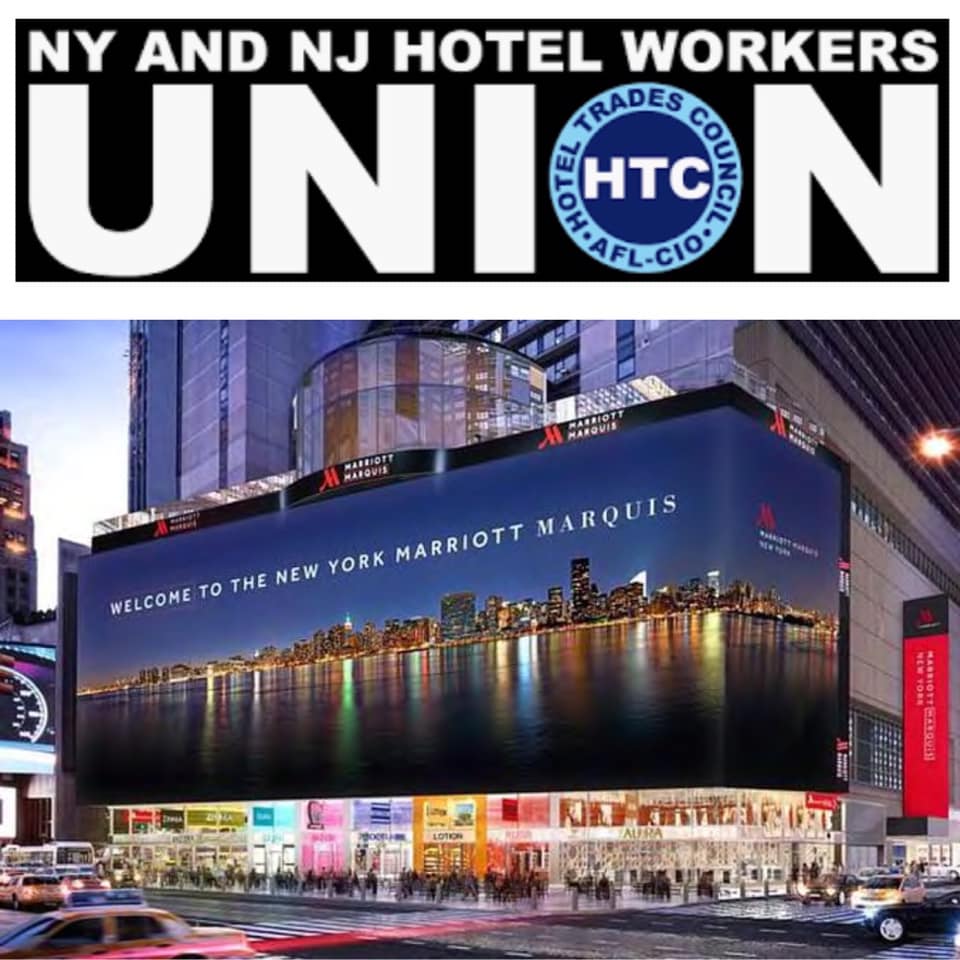 HTC won recognition as the Collective Bargaining Representative of the Workers in the Hotel’s Housekeeping Department.

This victory marks the end of a 35-year Union Avoidance Campaign at the hotel by Marriott.

Back in December, Marriott fired 850 Employees in the Food & Beverage Department and in some other departments, including housekeeping.

The COVID-19 Pandemic gave Marriott a ready-made excuse to reduce costs in New York and other major markets across the country by shedding long-term Employees and replacing them with a subcontracted workforce, HTC Officials said.

In Unionized Marriott hotels in New York City, Union Workers did not have their jobs subcontracted, shining a spotlight on the importance of Union protections.

When Marriott fired its 850 Workers at the Marquis, many of the remaining Employees immediately contacted the HTC. 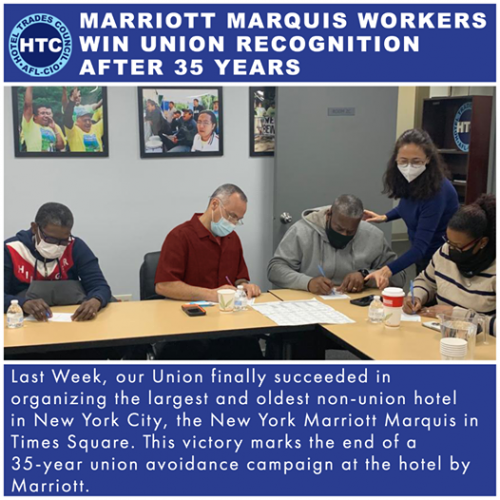 The Union already had an ongoing organizing effort in progress, including a strong Organizing Committee that was doing their best to convince their Co-Workers to sign up with the Union.

Unfortunately, Marriott’s Union avoidance strategy has been very effective since even before the hotel opened its doors back in 1985.

It took the massive elimination of much of the Staff for the remaining Workers to understand how much they needed the protection of a Union contract.

The shock of the massive termination provided the final push to give the Union a super-majority.

“This is a ‘bittersweet victory’ because (850) Marquis Workers ‘learned, too late, that corporations are not driven by sentimental feelings like loyalty,’” HTC Lead Organizer and Director of Organizing Julia Rybak said.

Marriott has been the most notorious Anti-Union, major hotel company for much of its history, Union Officials said.

The company has waged a very sophisticated and expensive Union Avoidance Strategy at the New York Marquis, its flagship hotel, over the years, they said.

In 1985, Marriott Marquis management interviewed many applicants for each of the 1,900 positions at the hotel, apparently screening out anyone the company believed would have potential Union sympathies.

In a city where all the major hotels were Union, there were suspiciously few Workers with Union experience hired when the hotel opened.

The hiring process included repeated interviews and polygraph tests, a practice that at the time was legal.

Years after the drive was over, these suspicions were confirmed when the Union obtained a copy of a Marriott manager's handbook instructing managers to avoid hiring applicants from heavily-Unionized cities like New York, Chicago and Seattle.