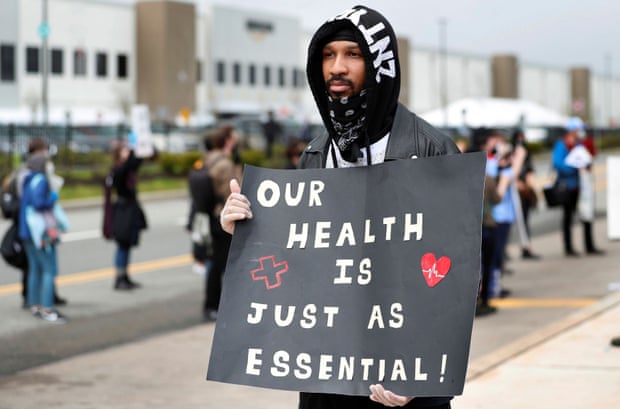 The Guardian Editor’s Note: Steven Greenhouse served as a long-time Labor Journalist for The New York Times and Author, focusing on Organized Labor and the workplace.  He is the Author of Beaten Down, Worked Up: The Past, Present, and Future of American Labor

In May, Workers at a McDonald’s in San Francisco said that when they asked their employer for masks, they were told to use coffee filters instead.

In April, at an Amazon warehouse in Staten Island, a Workers’ Representative told me they only saw two hand sanitizers for the facility’s 5,000 Employees.

A Walmart Worker in New Orleans said in April that several Cashiers were sent home without pay for refusing managers’ orders to stop wearing masks, after some shoppers interpreted it as a sign they had COVID-19.

Some financially stretched Retail Workers say they were all but forced to go to work sick because their companies didn’t give Paid Sick Leave for COVID-19 unless they first had a test showing they had contracted the virus, and in many places it was extremely hard to get tested.

Alarmed about the spread of COVID-19, health officials in Colorado criticized the JBS Meatpacking Company for having a “work while sick” culture.

At a Mom’s Organic Market in Philadelphia, Workers voiced alarm that their store was experiencing abnormally high sales volume, but little was being done to limit the crowding.

For many Front Line Workers, one of the most maddening aspects of the Coronavirus Pandemic is that their employers have often ignored their concerns and suggestions about health and safety, even though Workers arguably know best about what they need to stay safe on the job.

This frequent failure of employers to listen to their Workers - “a lack of Worker Voice” - is a deep-seated problem in the US, and it has become especially problematic during the current pandemic.

If companies paid more attention to their Workers’ concerns about safety, would a staggering 890 Workers at the Tyson Pork Plant in Logansport, Indiana, have contracted COVID-19?

Would more than 780 Workers at the Smithfield Plant in Sioux Falls, South Dakota?

Would eight Workers have died at JBS’s Beef-Processing Plant in Greeley, Colorado?

Under American Law, employers are required to listen to their Workers only when they have a Labor Union, but just 11.6% of American Workers are represented by Unions.

As for the other 88.4% of Workers, employers don’t have to listen to their views on anything - not safety, not pay, not anything else.

In the United States, the whole notion of “Worker Voice” is rarely discussed except among academics and Union Leaders, but in most other industrial countries, Worker Voice is an important, built-in part of the system.

Not only is Union Representation far higher in Europe than in the U.S., but many European countries require that most workplaces have Worker-elected councils.

To Continue Reading This Labor Perspective, Go To: www.theguardian.com/commentisfree/2020/jul/24/covid-19-workers-dangers-unions?