The WNY Labor Federation Calls For Republican U.S. Congressman Chris Jacobs To Resign In The Wake Of The Trump Insurgence That Took Place At The U.S. Capitol In Washington, D.C. Last Week 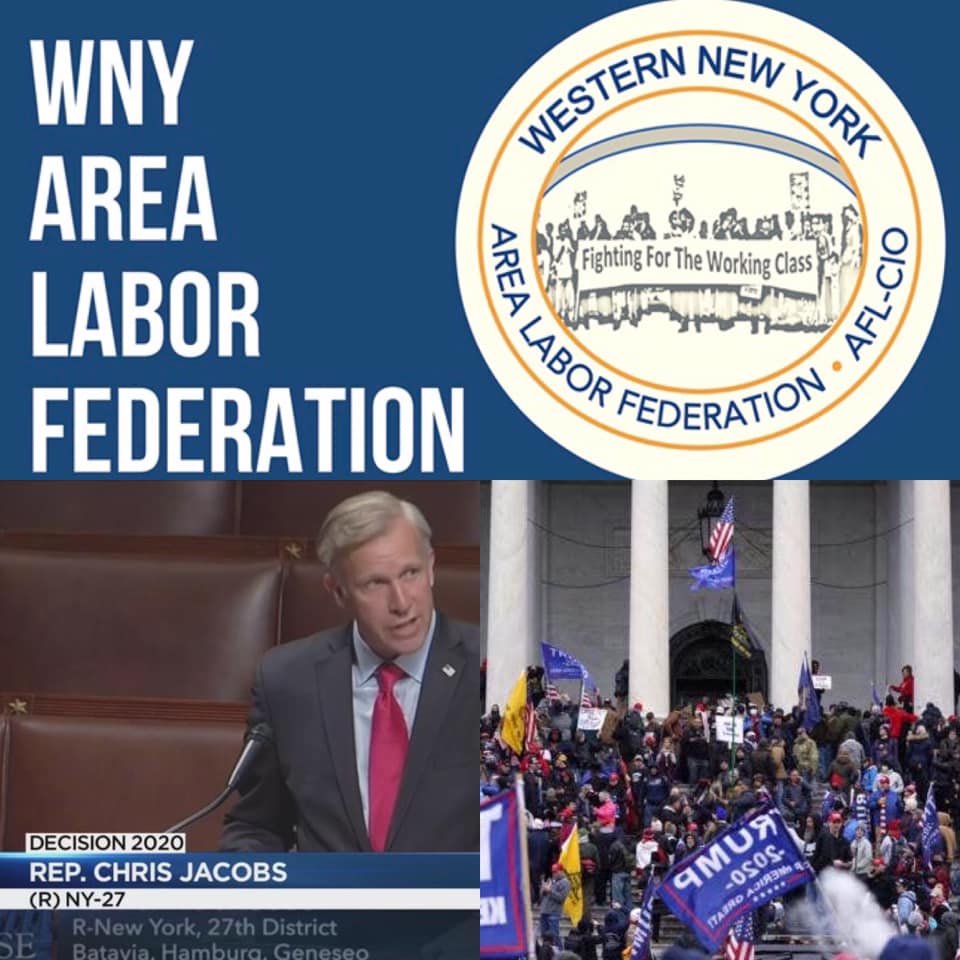 The Regional Labor Organization oversees 140 affiliated Local Unions that combine to represent 145,000 Union Workers in the Public and Private Sectors and the Building Trades.

Congress is moving toward impeaching Trump for inciting his followers during a rally that took place before the electoral vote count, urging thousands to storm the Capitol, where five people were killed – including a Police Officer, and many more injured.

Just hours after being whisked away to safety, both Congress and the Senate reconvened, and - despite a great number of Republicans in Congress and several in the Senate still casting their vote against it, validated the electoral vote that finalized the Presidential victory of Democrats Joe Biden and Kamala Harris.

Newly-elected Jacobs, who followed in the disgraced footsteps of Chris Collins (who was found guilty of insider trading, but was later pardoned by Trump) and Chris Lee (who resigned in disgrace several years ago in a sex scandal), continued to back false Republican rhetoric that the Presidential Election was rigged and voted against validating the Biden-Harris ticket as the winner.

That drew the ire of the WNYALF Executive Committee, which issued the following Statement:

Make no mistake about it – what we witnessed last week at the U.S. Capital was insurrection.

It was orchestrated by the President and enabled by Republicans who have refused to stand up to him.

It was a disgrace and a very dark day in American History.

Representative Chris Jacobs and a group of Right Wing fellow travelers in Congress pushed objections to the Presidential Election that never had any basis of fact – or evidence.

That act, in and of itself, is despicable.

Attempting to undermine elections without evidence undermines the foundation of Democracy.

As a Trade Union Movement, we understand the historical significance of Democracy as the cornerstone of our rights.

The laws protecting Working People are far from perfect and we work tirelessly to change them and make our voices heard – without violence.

The violence in the sacred halls of government cannot be disentangled from the seditious actions of Representative Jacobs and other Republican Right Wingers.

We call on President Trump and Representative Jacobs to resign.

The sooner the better. The Buffalo News on their editorial page called Jacobs a 'coward.' Let's see if he will do the right thing. Posted by Bill Daniels on January 14, 2021 at 10:38 am