âThey Are âFinally Going To Get What They Deserve.â âThese Jobs Are On Their Way To Becoming Decent Jobsââ - Airport Workers âCheerâ As Healthy Terminals Act Becomes Law In New York State 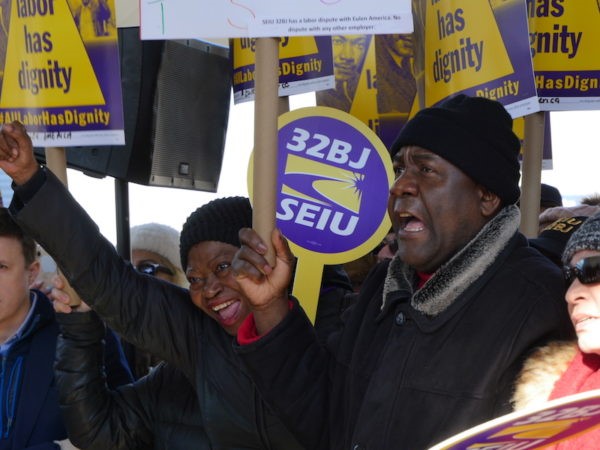 The measure will help provide current and future personnel with health care coverage.

“I ‘thank’ Governor Cuomo for raising standards for Airport Workers ‘in these difficult times,’ and I thank the Bill Sponsors Senator Biaggi and Assemblywoman Hyndman ‘for fighting tirelessly for this Bill,’” 32BJ Service Employees International Union (SEIU) President Kyle Bragg after the signing. “Essential, Front Line Airport Workers ‘will breathe a deep sigh of relief, knowing that real health care is an option soon.’”

Current In-House Airport Workers and Subcontracted Employees at LaGuardia and John F. Kennedy Airports who worked through the Coronavirus Pandemic and include Wheelchair Agents, Passenger Service Representatives, Cabin Cleaners, Terminal Cleaners, Baggage Claim Attendants and Security Officers, will be the first to receive the benefit supplement in July 2021.

Remaining Workers will obtain their assistance in a later phase.

“This is a ‘victory’ for Workers ‘who are predominantly’ People of Color or Immigrants, ‘who just a few years ago were trapped in jobs of poverty making ($7-and-hour) with no benefits, no healthcare, no paid days off and over the last few years, they managed to organize themselves into a Union and raise their wage to more than double,’” 32BJ SEIU Vice-President Rob Hill declared. “Now, they will ‘get the health care that they deserve.’  ‘It’s huge!’  ‘They are finally going to get what they deserve.’  ‘These jobs are on their way to becoming decent jobs.’”

New York State will now mandate an additional $4.54-an-hour in pay for the Workers, so they will have a decent health care plan.

The airports offered Employees a health plan before, but it was so expensive Workers optioned out of it.

In the next few months, Members of the Union will collectively bargain for an affordable health care fund.

For those who are not in a Union, their employer will have to get a fund that is a sustainable health care plan, Hill added.

“For the ‘first time, they will get the health care they deserve,’” he said. “This ‘will apply to both In-House and Subcontracted Workers, but most of the Workers happen to be subcontracted.’”

The Healthy Terminals Act will apply to some 12,000 Airport Workers.

“I’m ‘so happy’ for this law that Cuomo signed,” said Sumintra Ramkissoon, a furloughed JFK Security Officer who fought for the Bill for a year-and-a-half.

To Continue Reading This Labor News Story, Go To: www.laborpress.org/airport-workers-cheer-as-healthy-terminals-act-becomes-law/