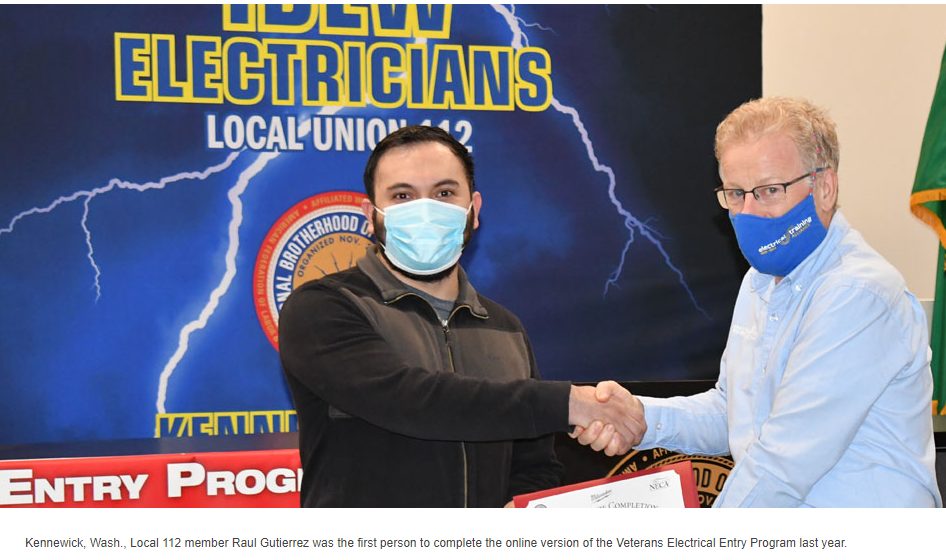 Gutierrez is a graduate of the Veterans Electrical Entry Program's (VEEP) computer-mediated learning course, which allows participants to take classes on-line that prepare them for an International Brotherhood of Electrical Workers (IBEW) Apprenticeship.

"The ‘biggest thing that stood out for me was the program itself,"’ said Gutierrez, who is now in his first year as an Apprentice with Kennewick, Washington IBEW Local 112. "It's ‘nice to see an organization actually come out and provide a path for Veterans to join them, especially the IBEW which can provide Veterans with a very good career.’"

VEEP, which is open to Service Members and their spouses, is usually done in person over seven weeks toward the end of a person's military service.

But starting this year, the Electrical Training Alliance - the training arm of the National Electrical Contractors Association (NECA), created an on-line option as way to expand access to the program.

Instead of having to go to Alaska to participate in Anchorage Local 1547's program, currently the only place offering the in-person version, Servicemen and Women can complete their work on-line from wherever they're at and whenever it works with their schedule.

"I've been ‘really impressed by the program,’" Local 112 Training Director Kris Tuura said. "It's a ‘great way’ to give veterans ‘a jumpstart’ into the Electrical Trade, ‘which is the whole point of a Pre-Apprenticeship.’"

Math classes are provided by the University of Tennessee, Knoxville.

ETA Curriculum Specialist Greg McMurphy, who used to be an Instructor with IBEW Local 112, provides support to the on-line Trainees, including details like sending them their Local's tool list to familiarize themselves with.

"I was ‘really glad’ to see (Raul) come through the location where I went through my Apprenticeship," McMurphy told Kennewick's NBC Right Now.

Gutierrez, who served for one year in South Korea and nine months in Afghanistan as a Combat Medic, says he came in with very little electrical experience, but the program got him up to speed: "Everything ‘was new to me, but the on-line learning went well.’  I thought the curriculum ‘was very detailed and easy to understand.’"

With a self-directed program, it's important to have a strong work ethic, something that's practically par for the course for Veterans - and one of the reasons they tend to make such good Electrical Apprentices.

"With a military background, ‘you know they can follow the rules,’" Tuura said. "They ‘come in disciplined so you know you don't have to worry about them.’"

To Continue Reading This Apprenticeship And Training Labor News Story, Go To: www.ibew.org/media-center/Articles/21Daily/2001/210111_Veterans