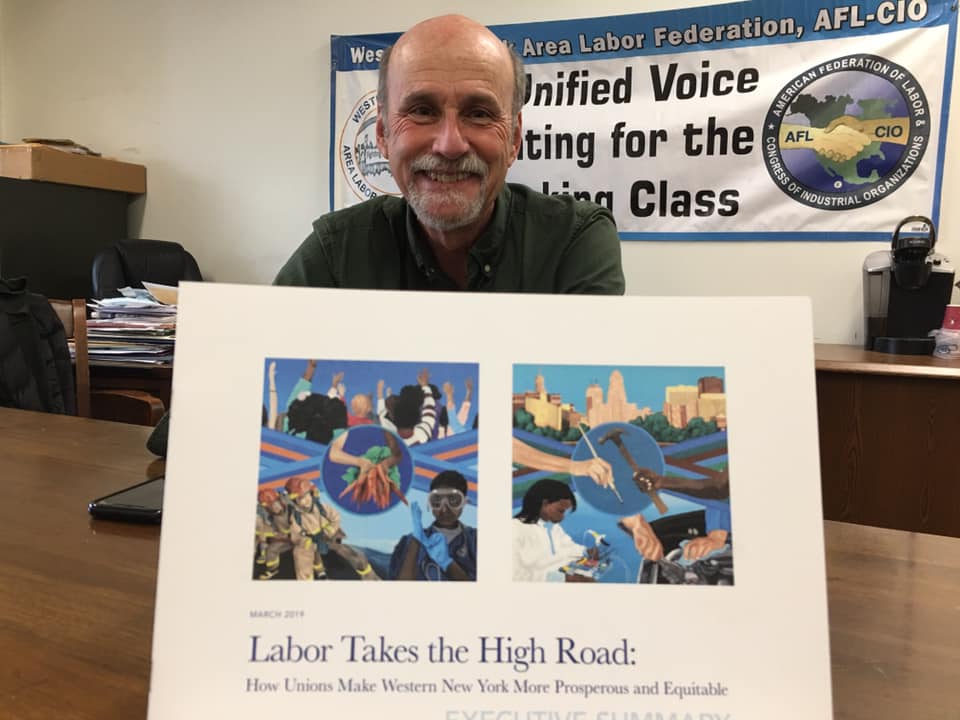 (BUFFALO, NEW YORK) – Just hours before Trump supporters stormed the U.S. Capitol in Washington after being egged on by the President, Western New York AFL-CIO Area Labor Federation (WNYALF) was meeting with WNYLaborToday.com to offer his thoughts on the end of the Trump era and where Organized Labor is headed under a new Biden Administration.

“I’m in a ‘good mood,’” messaged Lipsitz just before WNYLaborToday.com sat down with the WNYALF President, whose Regional Labor Organization oversees 140 affiliated Local Unions that combine to represent 145,000 Union Workers in the Public and Private Sectors and the Building Trades.

It was the morning after the Senate Run Off Elections in Georgia, which saw both Democrats defeat incumbent Republicans, which - in the process, handed control of the U.S. Senate over to Democrats, who will be able to break any 50-50 tie on a vote via the final say of incoming Vice President Kamala Harris, who will join President Joe Biden in the White House.

The interview conducted by Your On-Line Labor Newspaper came on the heels of Lipsitz (Pictured Above/WNYLaborToday.com Photo) providing WNYLaborToday.com with a copy of his latest Labor Perspective - The Chickens Have Come Home to Roost, which appears further below in our story.

“Biden ‘will be good for the Labor Movement,’” Lipsitz told WNYLaborToday.com in the WNYALF’s Buffalo Union Office.  “We will be ‘better off than under Trump, even though there were a great number of Unionists who voted for him.’  For one, Biden and his Labor Department ‘will make it easier for Unions to organize’ (non-represented Workers), which will allow the Labor Movement ‘to grow its Membership numbers over the next four years.’  Trump’s leaving ‘also opens the door for a united front against Trumpism and the Labor Movement will play a care in health care for all, an infrastructure bill, et al.’”

Lipsitz, who made WNYLaborToday.com aware that Governor Andrew Cuomo has put him on the Statewide COVID Task Force, noted that all New Yorkers cannot be vaccinated against the Coronavirus “without the help of the Federal Government,” which has not provided either the monetary help or direction to states to make the roll-out more effective than it has initially proved to be.

The WNYALF’s 2021 Agenda will be rolled out later this year, possibly in June when it hopes to hold an outdoor annual meeting where Western New York Unionists can gather safely.

But Lipsitz tells Your On-Line Labor Newspaper that the local Labor Agenda will be in lock-step with the National AFL-CIO and New York State AFL-CIO’s agendas.

Nonetheless, the WNYALF will hold a major meeting of Union Leaders, via Zoom, in late March to discuss what has transpired and how it will plan to move forward, including politically

Here’s Lipsitz’s most-recent Labor Perspective in column form, which was prophetic - considering what was going to take place at the Capitol just hours later:

2021 has arrived and with it comes a measure of optimism about the future.

We are just days away from the end of the Trump Administration.

Once he is no longer President, the healing process can begin.

However, before a wound can begin to heal, it must be cleansed of the dirt, debris and potential contamination that has been festering.

Donald Trump and his enablers have built a narrative of lies and distortions that are reflective of some of the worst tendencies of our public discourse.

Trump represents the most retrograde characteristics in our country’s history.

He is a stone bigot, selfish to the core.

He cares not a bit about anyone but himself and his family.

He doesn’t even care about the millions of people who he has deceived.

He is the worst kind of criminal, an unprincipled opportunist who would sacrifice the lives and well-being of millions of people here and around the world to protect his own narrow interests.

January 20th will make a difference when the Biden/Harris team will take over the American Government.

We have succeeded in defeating Trump and his enablers - in the short run.

Trump has also left the Republican Party with an irreconcilable contradiction.

On the one hand are those who support the juridical basis of a Constitutional Democracy and will vote to uphold the outcome of the 2020 Election.

And on the other hand are those who have become open advocates of an authoritarian Anti-Democratic Movement.

In this sense, Trump has clarified the political struggle we face in the coming period.

Chickens have come home to roost!

No one in public life (especially in the Republican Party) will be able to escape taking a stand on this issue.

For our movement, a pathway has been opened to continue our support of a united Pro- Democracy front - and at the same time promote an agenda based on economic and social justice.

We should continue to push for Universal Health Care, for positive economic development based on a rebuild of the infrastructure of the country, and an understanding that addressing climate change can lead to better jobs and a healthier world.

We should agitate for a tax system that increases the burden on the richest Americans, while providing relief for Working People.

We should oppose racial discrimination wherever its rears its head.

And of course, we must be a bulwark against the Trumpian movement by supporting science, reason and international cooperation.

The election is over and the Labor Movement was an important part of the united effort that defeated Donald Trump.

We cannot rest on this achievement.

Let us continue to provide a path forward for the Working People of our region and country.