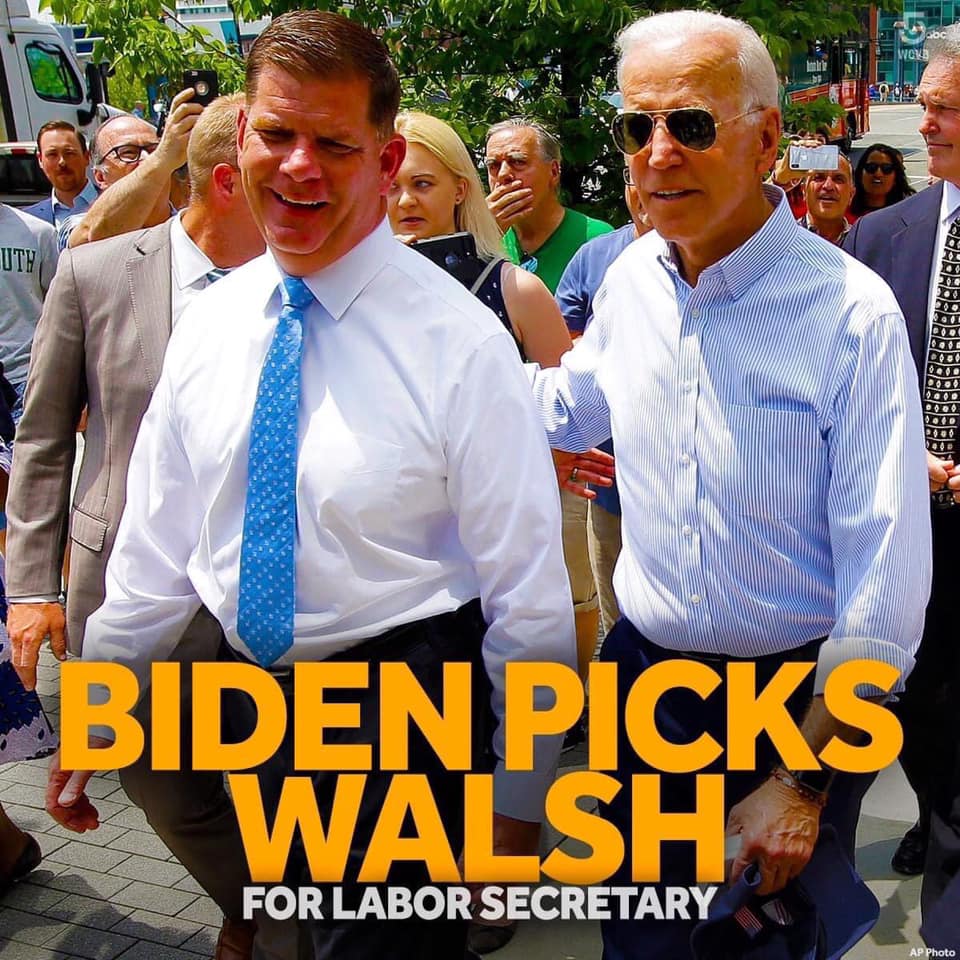 Before Walsh was elected Mayor of Boston, he was a Union Leader himself, coming out of Laborers Local 223, which he joined when he was just 21 years old.  Walsh later became the Local’s President and was later elected Secretary-Treasurer and General Agent of the Boston Metropolitan District Building Trades Council, before being elected its President in 2011. He served in that position until 2013 when he announced his run for Mayor.  Additionally, Walsh served from 1997 until 2013 as a member of the Massachusetts House of Representatives.

Biden was widely expected to choose a Labor Department head who enjoyed the support of Unions, given the President-elect's long-standing ties with Organized Labor, his support for the right to organize and the key role the agency will play in implementing the sweeping Pro-Worker agenda he campaigned on.

Walsh and Biden also have strong personal ties.  Not only did Biden speak at the mayor’s 2017 inauguration, but the two have been spotted together in Boston at the anniversary of the marathon bombings, at a Stop & Shop Workers rally and at dinner.

“Marty ‘is a star and he could hit the ground running as far as dealing with the issues and impact on Working Families,’” AFSCME President Lee Saunders said earlier this month.

The National AFL-CIO released a statement that said: “Boston Mayor Marty Walsh will be an exceptional Labor Secretary for the same reason he was an outstanding Mayor: he carried the tools.  As a longtime Union Member, Walsh knows that collective bargaining is essential to building back better by combating inequality, beating COVID-19 and expanding opportunities for Immigrants, Women and People of Color.  He will have the ear of the White House, the Cabinet and Congress as we work to increase Union Density and create a stronger, fairer America.  From the Boston Building and Construction Trades Council to the Massachusetts State House to the Mayor’s Office to his own personal journey with overcoming addiction, Marty Walsh has always been a fighter who understands the power of Working People standing together for a better life.”

Walsh will be tasked with some important roles in the Biden Administration.

On the campaign trail, Biden promised to be the most Labor-friendly President in U.S. history and has promised to push important legislation like the PRO Act and a repeal of Right-To-Work (for less), so it would be expected Walsh will have his hands full instituting new Worker Rules that strengthen Worker Rights.

Walsh will also be tasked with rolling back many of the Trump era regulations that were passed to make it harder for Workers to organize, like allowing Union decertification just 45 days after a Union vote.

He will also be entering an agency that has been neglected over the past four years.

One important department, the Occupational Safety & Health Administration (OSHA), has faced a significant loss of Inspectors and has come under enormous criticism during the Coronavirus Pandemic for failing to protect Workers and investigate complaints against companies that violated safety rules and COVID protocols.

Walsh will need to rebuild this agency to better protect Working People.

AFT President Randi Weingarten said Walsh’s connection to Biden and his own track record would make him effective.

“Marty comes to this with a closeness to the President-elect and an ability to get things done,” she told POLITICO.

Trumka said in November that Walsh would be a “great choice” who “has strong Union bonafides - he has executive experience, and a record that would make any Working Person very, very proud.”

For More On This Labor News Story, Go To: www.politico.com/news/2021/01/07/biden-chooses-boston-mayor-walsh-as-labor-secretary-455899 And https://ucommblog.com/section/national-politics/biden-selects-marty-walsh-labor-secretary