NALC Branch 3âs Jody Lynn Kotowski, WNY's First Mail Carrier To Die Of COVID-19, Showed Her Concern For Her Fellow Union Members âUntil The Very End,â Texting Them To Wear Their Masks After She Was Admitted To A Buffalo Hospital 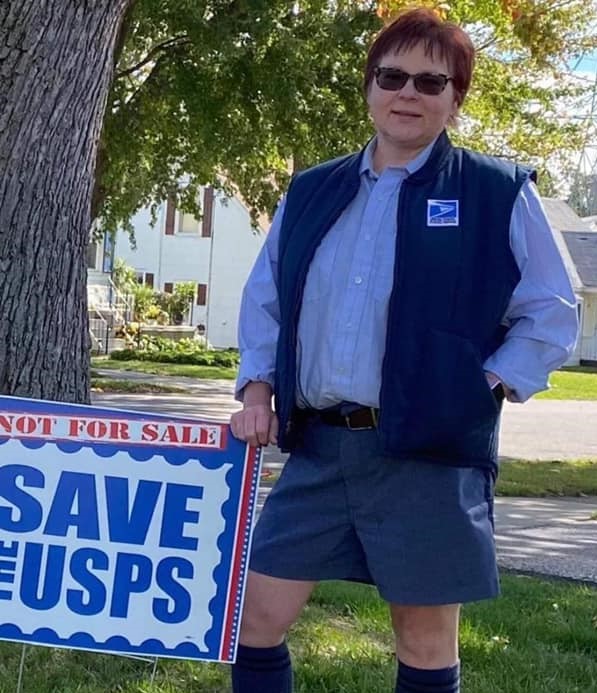 (BUFFALO, NEW YORK) – Jody Lynn Kotowski knew it was serious, so serious that one of her last communications before she succumbed to COVID-19 was to text a fellow National Association of Letter Carriers (NALC) Branch 3 Member from the hospital, telling that individual to relay a message to all area NALC Members: “Wear your goddamn masks.”

Kotowski (Pictured Above/Photo Courtesy of NALC Branch 3), a 23-year Member of NALC Branch 3 who delivered the mail in Downtown Buffalo and had served as a Steward and Editor of the Union’s local newspaper: The Buzz, was admitted to Millard Fillmore Suburban Hospital with Coronavirus symptoms on December 18th.

Just two days later, on December 20th, she passed at the age of 56 - leaving behind a husband of 22 years and a special needs daughter, Francesca, age 21.

Many kind things are now being said about Kotowski, whose husband, Frank - a Bus Driver employed at the Niagara Frontier Transportation Authority (a Union Member himself with Amalgamated Transit Union (ATU) Local 1342), and the mark she left behind.

“On behalf of ATU Local 1342, myself and our entire Union, we would like to offer our condolences to Frank, who has been an ATU Member since February (1st, 2019), to the U.S. Postal Service and NALC Branch Three,” Local 1342 President Jeff Richardson told WNYLaborToday.com.  “Jody ‘was a great Union Members in her own right.’”

“‘Strong woman’ is what first comes to my mind’” answered NALC Branch 3 President David Grosskopf Jr. when asked that question by WNYLaborToday.com.

“She ‘took no shit - from anyone.’  She was a ‘consummate’ professional, a ‘phenomenal’ mother and a ‘good’ wife.  She was a ‘tough’ Unionist ‘who told people where to go.’  ‘She spent a lot of time with our young Mail Carriers, serving as a mentor - and she always had time for everyone.’  She was a former Steward, was the Editor of our newspaper (The Buzz) and ‘was extremely active’ in the community,” Grosskopf said.

But during an interview with Your On-Line Labor Newspaper, Grosskopf shared the story of Kotowski texting her concern that her fellow NALC Brothers and Sisters wear their masks to protect them from the virus that has sickened so many and taken the lives of so many others.

It may have been one of her last communications to her NALC Brothers and Sisters, a text she sent while in the hospital.

“There ‘are some people out there who do not want to listen’ (to those telling them to wear their mask), but one of (Kotowski’s) last (communications) was a text to a Branch 3 Member, telling (everyone at NALC) to ‘wear a goddamn mask,’” Grosskopf, Jr. said.

“She ‘was always concerned about her fellow Members and she wanted to make sure her Co-Workers were wearing their masks,” he said. 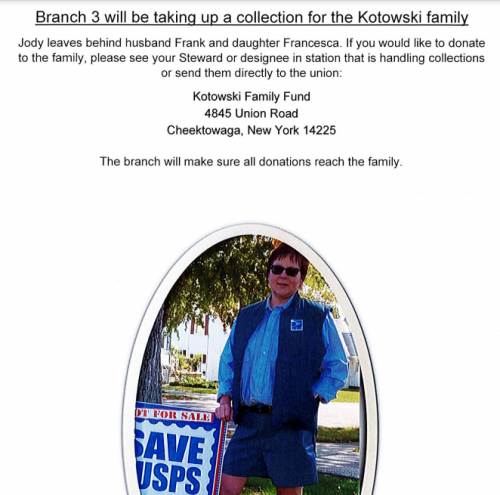 The reaction to Kotowski’s passing has spurred not only her Union, but others in the community to reach into their pockets and make donations to NALC Branch 3 (nearly $1,500 has been collected for her family) and to a Go Fund Me Page (where more than $15,000 has been donated) at https://charity.gofundme.com/o/en/campaign/support-for-francesca-kotowski?fbclid=IwAR0J0HtT7O8yJxfgDsakg6pHoK-1VulWHZmq8K5aVIEM_SV2oNVtV0LnJiw 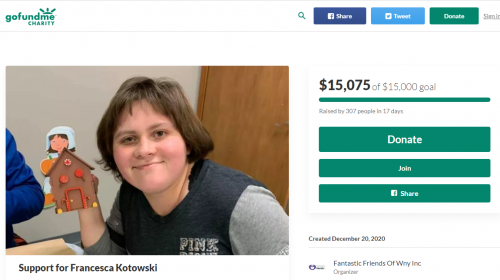 “It’s been ‘incredible,’” said Grosskopf, who was with the Kotowski Family just hours after Jody’s passing in order to lend her Union’s support and to offer help in getting her benefits and financials in line to relieve some of that burden that has now been placed on the family.

“Jody ‘was always there to help the other guy, now we want to make sure her family gets the help they need,’” said Grosskopf, who noted Kotowski’s niece is a NALC Branch 3-represented Letter Carrier here in Western New York.

For More On Jody Kotowski, Read The Buffalo News’ Story, Headlined: 'Warrior Mom' Said To Be WNY's First Mail Carrier To Die Of COVID-19 at https://buffalonews.com/news/local/warrior-mom-said-to-be-wnys-first-mail-carrier-to-die-of-covid-19/article_7a42f60a-49e3-11eb-8cdc-f3edcfde2fdb.html#tracking-source=home-top-story-1