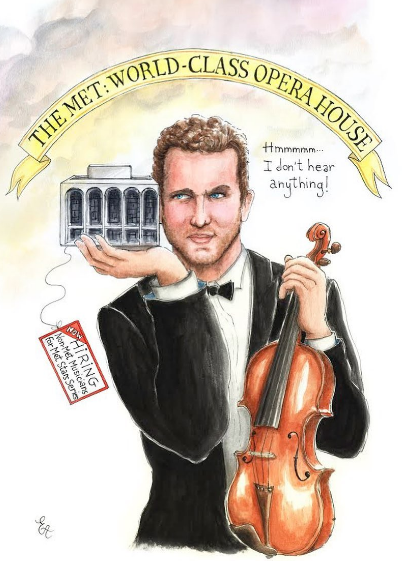 (NEW YORK CITY) - The Met Orchestra Musicians are taking issue with a decision that was made by the Metropolitan Opera’s to utilize European Musicians for its New Year’s Eve Gala in Germany.  In the statement, the Union-represented Musicians noted they’ve been unpaid for 10 months and that the Met’s actions have been an “outlier” in the industry.

“Every other major orchestra has been compensated since the very beginning of the (Coronavirus) Pandemic.  Met management is using the pandemic opportunistically.  They are not seeking a short-term crisis plan to balance out pandemic circumstances.  They are seeking permanent cuts.  The cuts they seek are so deep that the orchestra would need unrealistic salary gains over the next quarter-century just to get back to current salaries,” said the statement.

The statement proceeds to note that the members of the Met Orchestra have made several attempts to work with the Met and find some compromise - but have been repeatedly rebuffed by Met management.

“The orchestra has made a comprehensive proposal that provides substantial savings to the Met for three years, but they have yet to respond to our proposal, while continuing to insist that they will not consider anything but permanent changes to our contract,” the statement said.

The statement then shifted its focus to the Met Opera’s decision to hire non-Met Musicians for its New Year’s Eve gala in Germany.

“There is no reason why these gala events need to take place in Europe.  There are star singers on American soil too (Examples: Matthew Polenzani and Angel Blue - both flown to Germany for the Met gala - also Renée Fleming, Susan Graham, Isabel Leonard, Christine Georke, Eric Owens, to name a few) and we can work together to showcase the Met, while helping each other in the process,” concluded the statement. “This does not need to be so financially devastating to the orchestra, nor so contentious and heartless - that’s the choice of Met management.”

The statement was released alongside a cartoon (pictured above) featuring Concertmaster Benjamin Bowman holding up the Metropolitan Opera House with a “Now Hiring: Non-Met Musicians for Met Stars Series” tag.

“Hmmmm I don’t hear anything,” reads the cartoon.

To Directly Access This Labor News Story, Go To: https://operawire.com/orchestra-members-fire-back-at-metropolitan-operas-decision-to-hire-non-met-musicians-for-virtual-gala/?fbclid=IwAR3RfpmSymLVMk8VkvMeOrT_XPpdH9T3WE1NXYYHyQgUORivVFYr9Q_raWw