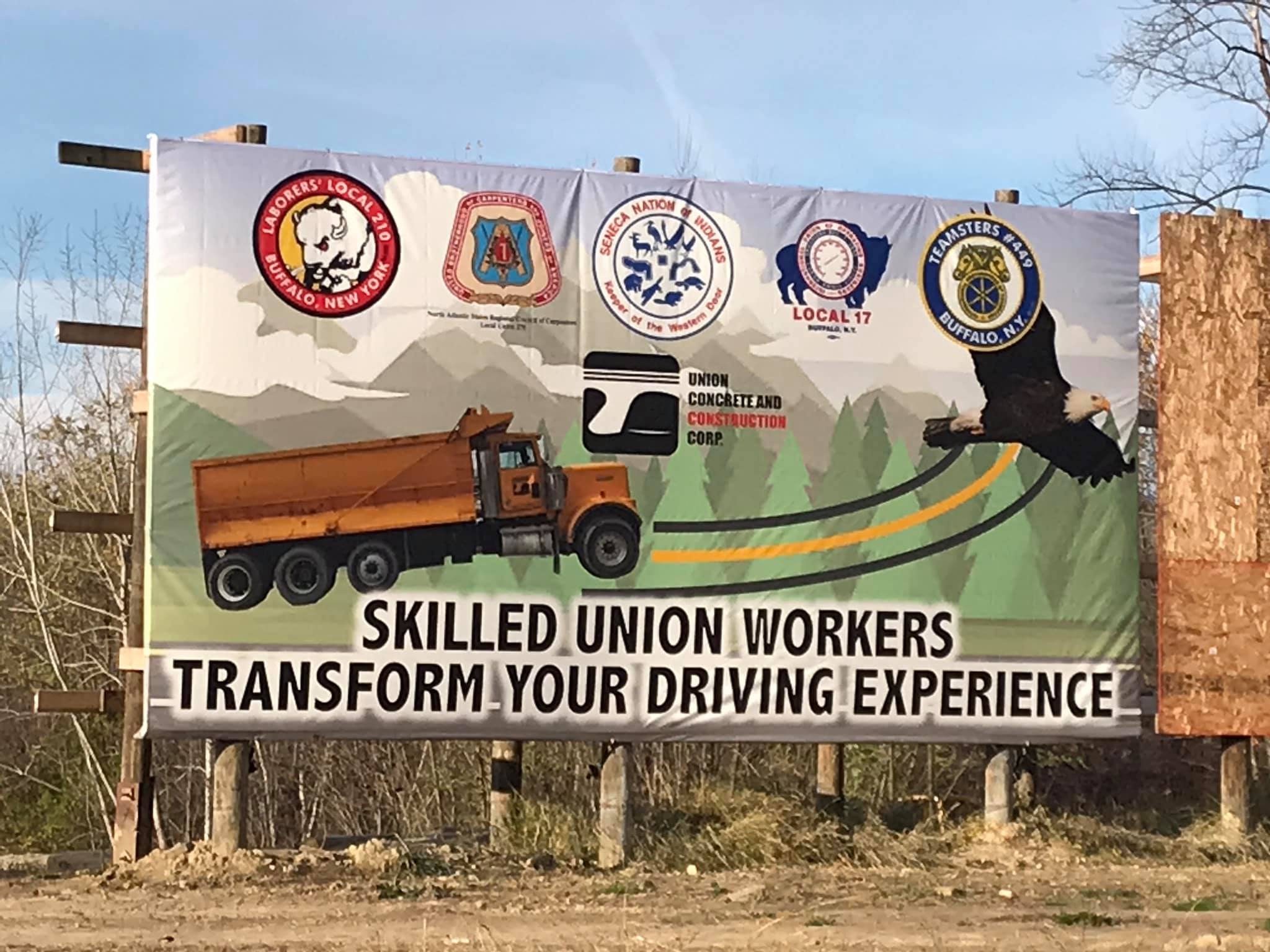 WNYLaborToday.com Editor’s Note: Pictured above, the Union logos of Laborers Local 210, the North Atlantic States Regional Council of Carpenters Local 276, the International Union of Operating Engineers (IUOE) Local 17 and Teamsters Local 449 - along with Union Contractor Union Concrete and Construction Corporation, are featured on a billboard that appears on the New York State Thruway that runs through Seneca Nation land in the Southern Tier.  It carries the tag line: Skilled Union Workers Transform Your Driving Experience, which is a public tip of the hat to the fine work performed by Union Members on the 14-mile, $20.8 rehabilitation project.  (Photo Courtesy of IUOE Local 17 Via the Social Network Facebook)

(SENECA NATION TERRITORY/WESTERN NEW YORK) – It isn’t often that you see a billboard erected to proclaim that it was skilled Union Workers who’ve transformed your driving experience - but it’s nice to see four Member Unions of the Buffalo Building & Construction Trades Council get their due recognition for the fine work their Members did on the New York State Thruway that runs through Seneca Nation of Indians Territory in the Southern Tier.

A four-mile stretch of the I-90 that cuts through the Seneca Nation's Cattaraugus County Territory had been neglected for more than 15 years and at once point got so bad the New York State Thruway Authority had to reduce the 65-mile-per-hour speed limit to 45 miles per hour.

A full rehab of the roadway - where some 14 lane miles were repaired and replaced, carried a price tag of $20.8 million.

It was completed in June, with crews of 50 Construction Workers, including some members of the Seneca Nation, working in 24-hour shifts, six days per week.

When the dust cleared, the project was finished on budget and ahead of schedule - despite the problems brought about by the Coronavirus Pandemic.

The work followed a September 2019 agreement between New York State and the Seneca Nation that allowed some temporary repairs to proceed after a years-long impasse over regional casino revenues.

Union Concrete and Construction Corporation of West Seneca won the contract, which included removing five inches of the existing asphalt, repairing the concrete base of the road, reconstructing roadway shoulders, replacing guiderails and performing other safety upgrades.

Original artwork of an eagle in flight, leading a very large dump truck, is also part of the billboard.

“Part of me ‘doesn’t like’ Labor advertising, ‘but if you don’t make people aware of what we do - nobody else will,  so it is absolutely important to do these kind of things,’” IUOE Local 17 Business Manager Gary Swain told WNYLaborToday.com.

“This work was done by ‘good, quality’ Union Trades Members.  ‘Now it’s a road that’s smooth and a breeze to drive over.’  ‘The feedback I’m getting from the people who’ve seen it is that it’s pretty cool.’  ‘We’re just trying to make people aware of the quality of work our Members do.’  ‘People need to pay attention to that, because when it’s all said and done - (now) it’s smooth sailing,’” Swain said.

George Harrigan, who serves as Teamsters Local 449 Officer/Secretary-Treasurer and Business Agent, told Your On-Line Labor Newspaper: “It’s ‘absolutely great.’  It’s (Marketing 101) - ‘if you don’t say it, who knows about it.’  ‘That’s why you’ve got to market it because people take (the work) for granted.’  ‘It was a good move because safety is number one.’  ‘It also opens the doors to our Apprenticeship Programs and our (Union) Organizing efforts.’  ‘Hopefully this opens a lot of eyes.’”

Newly-elected Seneca Nation Cattaraugus Councilor Eliot Jimerson, a retired Member of IUOE Local 17, has been working as a Seneca Nation liaison to the Building Trades Unions in an effort to build a better relationship with the Trades and – at the same time - work to make more young people within the Seneca Nation aware of the Labor Organization’s many Apprenticeship opportunities and the benefits of being a Union Construction Trades-represented Worker.

“We’re ‘working together’ (to build a bridge for the Seneca People) ‘to get career jobs,’” Jimerson tells WNYLaborToday.com.  “There ‘were quite a few’ Senecas who worked on the (State Thruway rehab project), including some female Apprentices.”

Jimerson, who retired in 2016 after 35 years as an active Member of IUOE Local 17, comes from a Union Family.  His father was a Union Ironworker and his uncles were also Ironworkers and Roofers, he told WNYLaborToday.com.

“I ‘want our people to be part of this’ (working in the Unionized Trades).  That’s why I had a banner put up in our community center that says: ‘Invest In Yourself.’  I tell people, ‘trust me – you’re worth it.’”  (Photo Below/Courtesy of Elliot Jimerson) 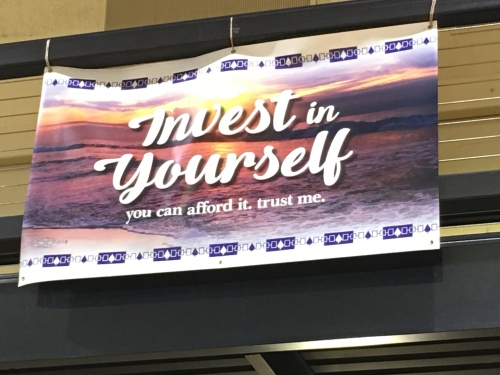 To build on that positive message both IUOE Local 17 and North Atlantic States Regional Council of Carpenters Local 276 have taken out advertising space inside the Seneca Nation’s ice rink and field lacrosse facilities.

“It was a ‘good way to start a conversation,’” Jimerson said.

“To me, the billboard on the thruway and the messages at the ice rink and lacrosse field ‘are important’ because I’m ‘Union Strong.’  I see guys going to work Non-Union (and how they are being shortchanged on wages, benefits and safe working conditions).  I ‘hope this (message) takes off and that more of our people seek access to the training (programs) offered by the Building Trades Unions.’  ‘We just have to continue speaking loudly about it.’”