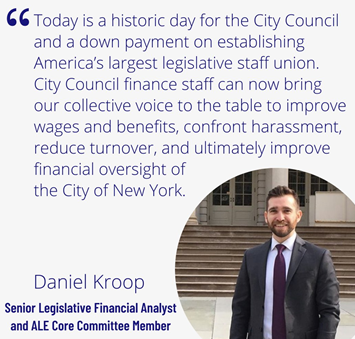 (NEW YORK CITY) - The first sector of New York City Council Staffers have been voluntarily recognized as a Union, which its Members say makes it the first Legislative Staff Union in the State of New York.

The recognition comes following at least two years of organizing by Council Staffers.

"This is a ‘historic event because we will be the first Legislative Union in New York State,’" Daniel Kroop, a core Committee Member on the Union and Senior Legislative Financial Analyst, said in a phone interview.

"We think the ‘investment that the Union will help us make will ensure institutional and fiscal knowledge stays at the Council.’  This is ‘about enhancing the ability’ of the City Council ‘to be an equal partner with the mayor, as we negotiate a ($92 billion) budget,’" Kroop said.

About 400 Staffers requested that Johnson recognize the Union back in January.

Most of those Employees, the Council's Aides, have not been formerly recognized as Union Members yet.

The COVID-19 Pandemic and complexities with how Aides' employers are defined across 51 council members has spurred delays, according to Kroop - but he says the Union expects Johnson's support to continue.

"This is a ‘down payment towards building what will be America's largest Legislative Staff Union,’" Kroop added.

The City Council recognized ALE with the New York City Office of Collective Bargaining on December 7th and the Bargaining Unit will be certified come January, according to the Union.

"I am told that it is rare to have a City Governmental Entity file a voluntary petition of recognition for employees seeking to Unionize, but I believe that it is important to practice what you preach, especially when it comes to Workers’ Rights," Johnson said in a statement.  "That’s why I am so proud to have filed this petition on behalf of our Central Staff Legislative and Senior Legislative Finance Analysts."

The City Council has been rattled with labor issues among Workers over the past year.

To Read This Labor News Story In Its Entirety, Go To: https://gothamist.com/news/city-council-staff-union-becomes-first-legislative-union-ny-state?can_id=d28a0e75022b91d73fc95bc86b686390&email_referrer=email_1024323&email_subject=union-matters-december-18-2020&link_id=6&source=email-union-matters-december-11-2020