âWeâre Supposed To Be Giving âThemâ Thanks For What âThey Doââ - Sheet Metal Workers Local 71 & The John W. Danforth Company âHonoredâ For The Roles They Played In Providing U.S. Air Force Reservists Access To Apprenticeship Training 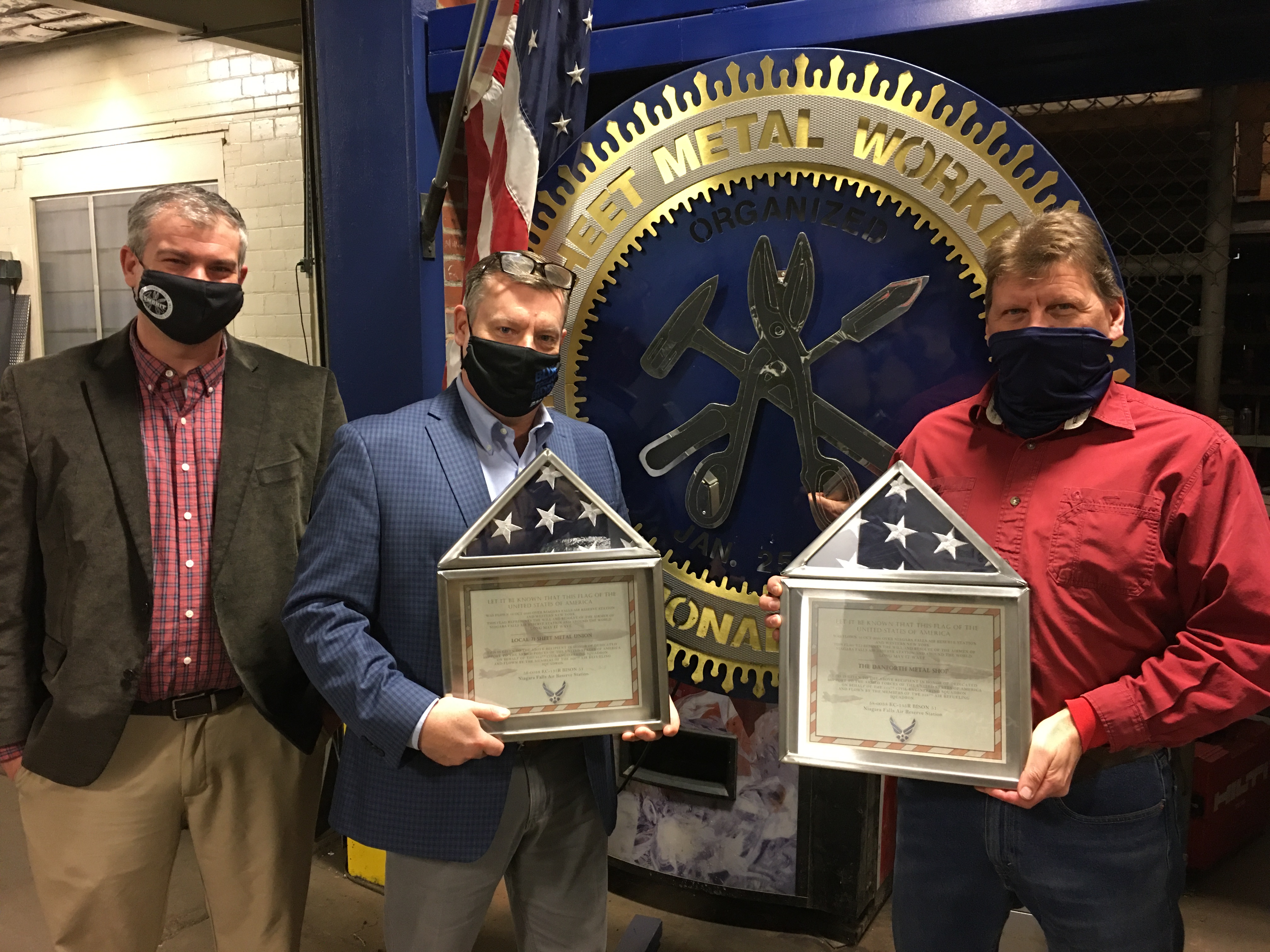 “I was a ‘little flabbergasted.’  ‘It was a bit odd, because we’re supposed to be giving them thanks for what they do,’” Crist told WNYLaborToday.com after Local 71 and the Danforth Company were presented with specially-made stainless steel and glass shadow boxes constructed by the participating Reservists/Apprentices that contained an American Flag and a certificate of appreciation for what they had done. 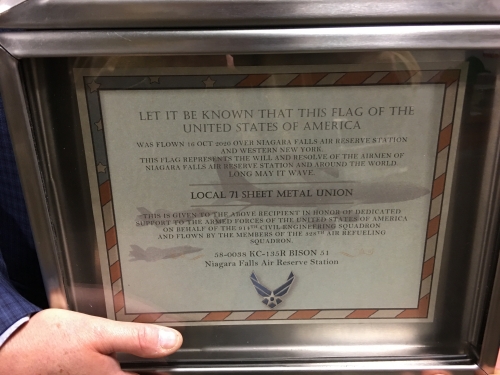 Danforth received the same citation that was made out specifically to the company.

“They wanted to use our (training) facility for their Reserves to get some training done while other (locations) ‘were not allowing it because of COVID,’” Business Manager Crist said.  “They asked if they could come in with about five or six people.  They were here for a week or two.  It was ‘easy’ for us.  One of our Members who is an Air Force Reservist ‘put it all together’ and Danforth ‘donated all the materials’ (the Reservists/Apprentices used).”

Kevin “Duke” Reilly, John W. Danforth’s Chairman, told Your On-Line Labor Newspaper: “Any day ‘we can help our ladies and gents in uniform, it’s a great day,’” “We ‘support their training and we embrace that at Danforth.’  ‘Paul (Crist) and I were happy to do it.’”

Mike Donius, a 27-year-old SMART Local 71 Apprentice and Technical Sargent/Engineer with the Air Force Reserve at the Niagara Falls Air Base, was the one who got the ball rolling when he approached his Union for help and the use of its Liberty Street Training Facility in Buffalo.

“Our training this year got cancelled because of COVID, ‘but we wanted to make sure we got our guys their training,’” Donius told WNYLaborToday.com.  “There was ‘no way of training at our base and there was no money’ (to pay for it), so I called Paul (Crist) and asked if we could (use the SMART Local 71 Training Center) and he said ‘no problem.’  We went to our Trustees, who also agreed to let us use the facility.” 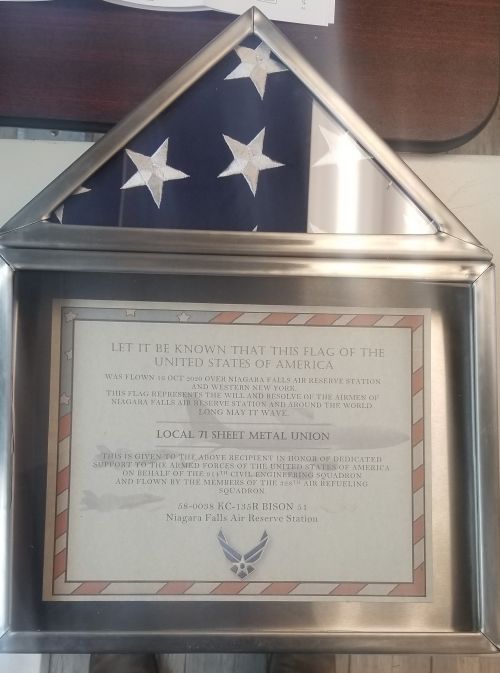 “We have guys who are Electricians, Plumbers, Operators, Firefighters – a lot of career fields, so ‘we have to make sure we get our training.’  (Because of the pandemic and the lack of Federal funds for such), ‘it’s a struggle because of the lack of material and equipment.’  ‘Without this, I had no clue as to what we were going to do.’  We needed to train in sheet metal fabrication and welding, but we had ‘no’ equipment.  The Union hall had the equipment and Danforth donated a lot of the metal.  (Air Force) Leadership was ‘surprised, mind-boggled’ (by the donation of space, equipment, materials and time),” he continued.

Several Reservists from the Western New York Region and one each from Rochester and the Syracuse area took part in the Apprenticeship Training, said Donius, who has served overseas in Jordan and Kuwait, and for example – had built a perimeter of welded barbed wire around the base and put together and installed an air conditioning system to keep those serving our country comfortable in extremely high temperatures. 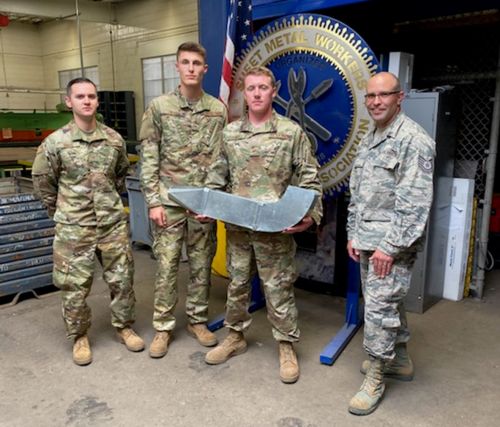 In the end, Danforth’s Director of Shop Operations - Michael Bement, told WNYLaborToday.com that Danforth donated 10,000 pounds of sheet metal for the Air Force Reservist Apprentices to use for their training at Local 71.

“(Danforth) ‘was happy to be part of this and it was Mike Donius (also a Danforth Employee) who drove (the effort).’  ‘I thought it was fantastic.’  ‘We were honored just to be included and give a hand to the men and women who give so much to us.’  ‘It’s good to give back to them.’  ‘The (shadow boxes) were so beautifully made and we have it hanging in our fabricating shop.’ 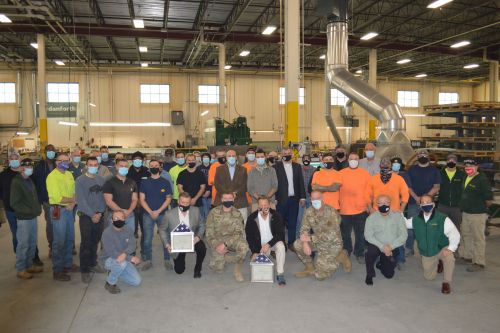 “We thought to ourselves, ‘How we would thank them?’  ‘It took a little bit of time,’ but we came up with the shadow box and certificate,” said Donius, who is himself employed at Danforth and works in sheet metal fabricating and welding.

“This was ‘awesome’ and my Unit is ‘so thankful’ (to both Local 71 and Danforth).  ‘I’m very proud of my Union and my Unit is very, very thankful.’  ‘It gave me a place to get our guys trained.’  ‘Without this, I don’t know what we would have done.’  ‘There was no way we could have done this,’” Donius told Your On-Line Labor Newspaper.