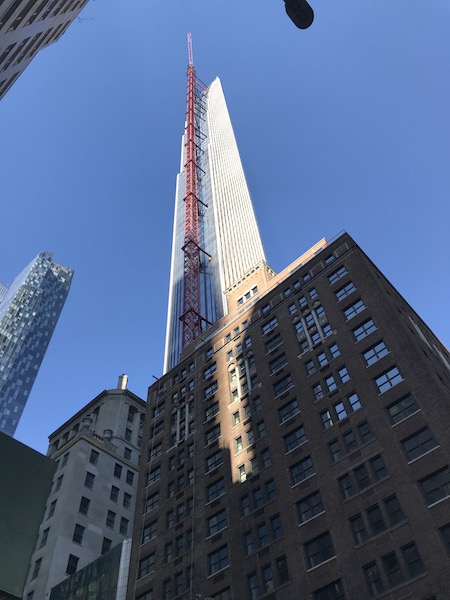 (NEW YORK CITY) - Over the last eight to 10 years, Non-Union contractors paying little more than minimum wage have made inroads into large-scale construction in Manhattan.  Now, the #TakeItBack Campaign, consisting of a coalition of several Building Trades Union Locals, wants to turn that around.

Last month, Take It Back protested outside 111 West 57th Street, the job site where in October a wind-buffeted crane smashed into the building and sent pieces of aluminum and glass as big as 20 feet long plummeting to the ground.

The 84-story “Billionaire’s Row” building is the tallest structure ever built in the city with Non-Union labor.

Non-Union contractors, Campaign Organizers say, can underbid Union Contractors by cutting corners on safety and hiring Workers who are in a weak position to object to low wages or getting shorted on pay - Immigrants, many undocumented, and parolees recruited through “body shops,” who could be sent back to prison if they can’t hold a job.

“It’s ‘all about the Workers doing the same work that we do and getting exploited,’” Scopo said.

On a job at 45 Commercial Street in Greenpoint, says District Council 16 organizer Mike Arena, one Worker was getting only $14 an hour.

The Take It Back Coalition includes locals from the Laborers, Bricklayers, and Insulators Unions.

The campaign, Scopo says, was born in early 2019, “to continue the Labor Movement” after the Building Trades Unions’ “Count Me In” Campaign against developer The Related Companies’ use of Non-Union labor at Hudson Yards ended with a deal that allowed some Non-Union contractors on the project.

That symbolized those contractors’ expansion out of smaller projects into constructing large residential and commercial buildings.

The campaign finds jobs with “very shoddy contractors” by a mixture of research and word of mouth, says Scopo.

“A lot of Members call us.  As organizers, we grid the city,” he said.

That means visiting different job sites around the city and talking to workers on their lunch and coffee breaks, says Arena.

“Sometimes ‘I go home with a tear in my eye, the way these Workers are treated,’” he says. “When ‘they get hurt, they put them in a cab.’”

It also got Workers to speak on an investors’ call at CIM, a Los Angeles-based private-equity firm that Take It Back has targeted for hiring contractors with a record of wage theft and fatal accidents at its 732-apartment luxury development in Downtown Brooklyn.

“We’re ‘going to continue to be in the face of what they do,’” he says. “We ‘hope we educate enough Non-Union Workers to rise up against greedy developers.’”

To Directly Access This Labor News Story, Go To: http://laborpress.org/take-it-back-campaign-urges-nonunion-workers-to-rise-up-against-greedy-developers/