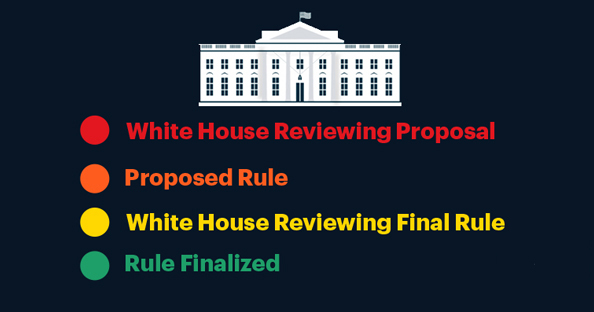 (WASHINGTON, D.C.) - The Trump Administration is on pace to finalize 36 major rules in its final three months.

For example, six days after Republican President Donald Trump lost his bid for reelection, the U.S. Department of Agriculture notified food safety groups that it was proposing a regulatory change to speed up chicken factory processing lines, a change that would allow companies to sell more birds.

An earlier USDA effort had broken down on concerns that it could lead to more Worker injuries and make it harder to stop germs like Salmonella.

Ordinarily, a change like this would take about two years to go through the cumbersome legal process of making new federal regulations, but the timing has alarmed food and worker safety advocates, who suspect the Trump administration wants to rush through this rule in its waning days.

Even as Trump and his allies officially refuse to concede the November 3rd election, the White House and Federal Agencies are hurrying to finish dozens of regulatory changes before Democrat Joe Biden is inaugurated on January 20th.

The rules range from long-simmering administration priorities to last-minute scrambles and affect everything from creature comforts like showerheads and clothes washers to life-or-death issues like Federal executions and International Refugees.

They impact everyone from the most powerful, such as oil drillers, drug-makers and tech startups, to the most vulnerable, such as families on food stamps, transgender people in homeless shelters, Migrant Workers and endangered species.

ProPublica is tracking those regulations as they move through the rule-making process.

Every administration does some version of last-minute rule-making, known as Midnight Regulations, especially with a change in parties.

It’s too soon to say how the Trump Administration’s tally will stack up against his predecessors, but these final weeks are solidifying Conservative policy objectives that will make it harder for the Biden Administration to advance its own agenda, according to people who track rules developed by Federal Agencies.

“The ‘bottom line’ is the Trump Administration ‘is trying to get things published in the Federal Register, leaving the next administration to sort out the mess,’” said Matthew Kent, who tracks regulatory policy for Left-Leaning Advocacy Group Public Citizen. “There are ‘some real roadblocks to Biden being able to wave a magic wand on these.’”

In some instances the Trump Administration is using shortcuts to get more rules across the finish line, such as taking less time to accept and review public feedback.

On the one hand, officials want to finalize rules so that the next administration won’t be able to change them without going through the process all over again.

On the other, slapdash rules may contain errors, making them more vulnerable to getting struck down in court.

To Continue Reading This Labor News Report, Go To: https://ctmirror.org/2020/11/29/trump-races-to-weaken-environmental-and-worker-protections-before-jan-2/