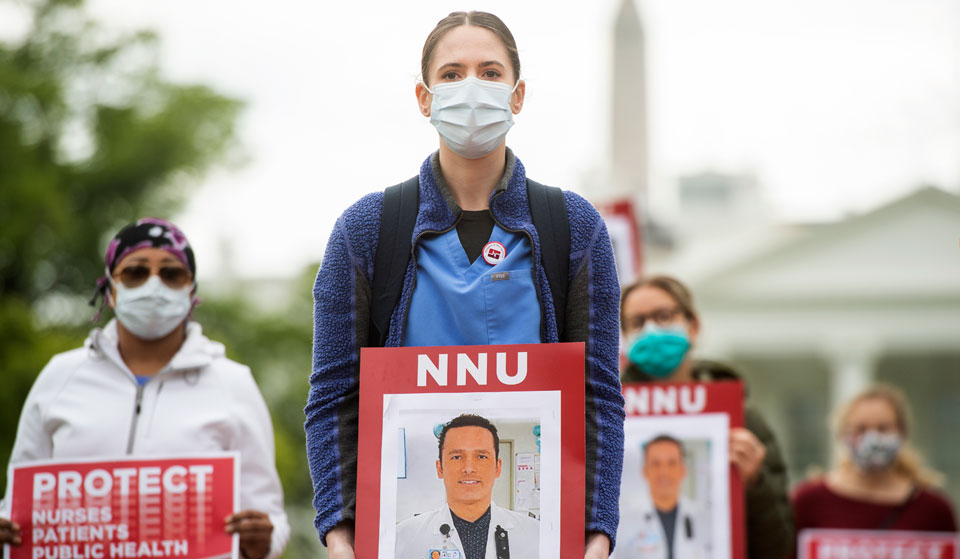 (WASHINGTON, D.C.) - National Nurses United (NNU) is gearing up for a new drive to enact Medicare For All, but its organizers realize the campaign may take a while - Not only does the Nurses’ Union face the moneyed opposition of the insurance and hospital lobbies, but it must overcome a “not-that” attitude from Democratic President-elect Joe Biden.

Nevertheless, the Union will forge ahead with the drive.

That system also produces insurers’ denial of care and for-profit hospitals refusal to protect Workers even in the face of the Coronavirus Pandemic - NNU has documented record hospital profits and enormous ratios between hospital charges and actual costs of care in a report released on November 17th at www.nationalnursesunited.org.

NNU has long been Organized Labor’s single strongest advocate of government-run single-payer Medicare For All, eliminating health insurers and their lobby, their overhead, their high premiums, deductibles, and co-pays - and the high unnecessary death toll their denial of care produces.

The pandemic has only made a bad U.S. Health Care System worse, Cortez reported.

Nationally, more than 2,000 Health Care Workers - RNs, Doctors, Staffers and others - have tested positive for the Coronavirus.

And NNU’s 150,000-plus RN Members have repeatedly described how insurers deny care to patients, who in turn often don’t come to hospitals until their conditions have dramatically worsened.

NNU’s Organizers shared that data and their conclusions in a mass Zoom conference call in November where they outlined both immediate and long-term steps for their campaign - which includes pushing Medicare For All not just in Washington, but in the states too.

It also forced House Speaker Nancy Pelosi (Democrat-California), who considered it too radical, to order two committee hearings on it last year.

But Pelosi made clear Medicare For All would stop there.

Over in the Senate, Bernie Sanders (Independent-Vermont) attracted 14 original co-sponsors to Medicare For All and repeatedly, gleefully declared: “I wrote the damn bill!” on the Presidential Primary Trail earlier this year - but it never even got a hearing in the GOP-run Senate.

That back-of-the-hand dismissal from party leaders didn’t stop Republicans from hanging both Medicare For All and the Green New Deal around Congressional Democrats’ necks this election year.

The GOP waved the red flag of “Socialism!” at both, picked up half a dozen House seats and let Dems gain only one Senate seat when they planned for more.

To Continue Reading This Labor News Story, Go To: https://peoplesworld.org/article/national-nurses-united-readies-new-medicare-for-all-push/