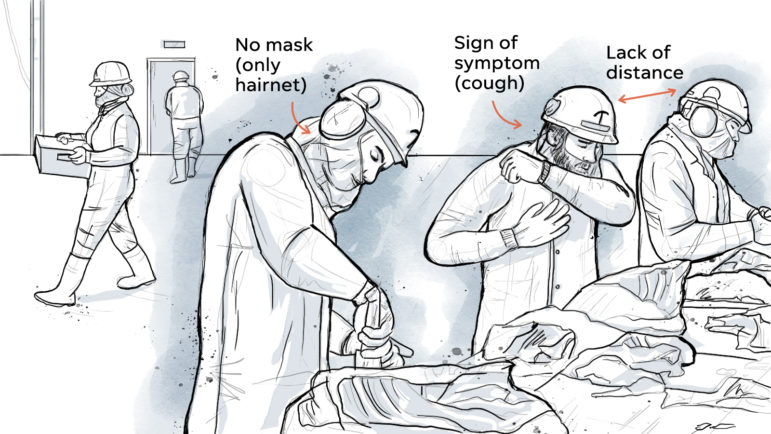 USA TODAY Editor’s Note: This story is part of a collaborative reporting initiative between USA TODAY and the Midwest Center for Investigative Reporting and is supported by the Pulitzer Center on Crisis Reporting.

(ST. JOSEPH, MISSOURI) - Bernardo Serpa cut pork legs eight hours a day, six days a week.  He made the same cut roughly 12,000 times per shift, wielding a sharp knife as a Production Line Worker at the second-largest pork processing plant in the country.

Then the Coronavirus Pandemic hit.

In one week, dozens of his colleagues at the Triumph Foods plant in St. Joseph, Missouri, got sick.

It prompted the company to test all of its 2,800 employees.

When it was Serpa’s turn, he got his nose swabbed.

Then he went back inside where he stood elbow to elbow, shoulder to shoulder, with dozens of other potentially infected Employees to await the results.

His test came back negative, but his relief was short-lived.

One week later, the Cuban Immigrant was among hundreds of his Co-Workers to contract Coronavirus in what would become one of the Nation’s largest meatpacking plant outbreaks.

Serpa would spend nearly four months in the hospital, much of it in a coma.

USA TODAY and the Midwest Center for Investigative Reporting spent five months piecing together the pivotal moments in the Triumph Foods outbreak, interviewing more than a dozen current and former Workers and examining thousands of pages of government records.

The reporting found Triumph failed to respond with effective safeguards during a crucial period from mid-March to mid-April that could have contained the spread of COVID-19.

And local Health Officials, who received complaints from Employees and their family members, missed several opportunities to investigate.

Instead, they took the company’s word that it was doing all it could to protect its Workers.

As outbreaks spread through meatpacking plants across the country, some experts warned that Triumph and others in the industry would choose production over Worker safety.

Since then, Workers and their Unions have accused companies of doing the bare minimum to protect Staff  - and time and again finding ways to keep their lines running.

At the start of the pandemic, Triumph Foods Employees worked up to 10 hours a day, crammed side by side.

Even after the U.S. Centers for Disease Control and Prevention recommended the general public wear face masks, the company did not require them for weeks.

It initially did not screen sick Employees and implemented a bonus program that rewarded Workers for perfect attendance even as they complained and fell ill.

To Continue Reading This Labor News Story, Go To: www.usatoday.com/in-depth/news/investigations/2020/11/11/coronavirus-death-pork-plants-meat-packing/6044754002/?fbclid=IwAR2HDl_QhA3h47OYyiFimNM-yho69jkkXOQbv6frMmdEyE1WEqQrZlc9-Ps