How About A Union Leader Heading The U.S. Department Of Education? The Presidents Of The AFT & NEA âAre Considered The Front-Runnersâ To Replace Betsy DeVos In The New Biden Administration 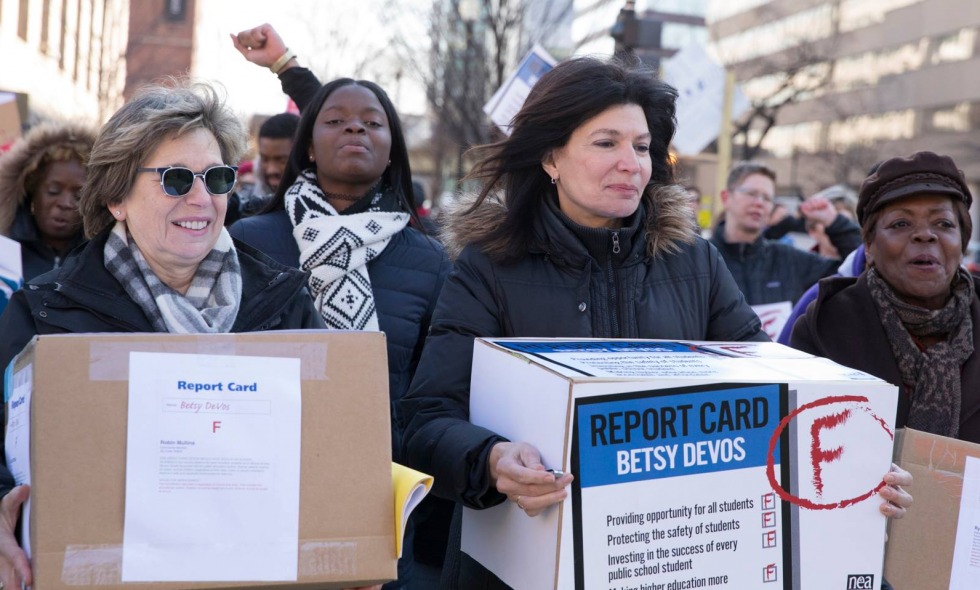 (WASHINGTON, D.C.) - Two of the most important Education Union Officials in the country are being considered to take over for U.S. Secretary of Education Betsy DeVos, who’s been in the position since 2017, but will be replaced by the new and incoming Biden Administration.

DeVos, who had no education background before taking over, was despised by Teachers and their Unions for her lack of experience, her push to privatize public education, and her moves to make it easier for student loan companies to take advantage of students.

At a forum with the National Education Association (NEA) in 2019, now President-Elect and former Vice President Joe Biden made the following pledge: "First thing, as President of United States - not a joke - first thing I will do is make sure that the Secretary of Education is not Betsy DeVos, it is a Teacher.  A teacher.  Promise."

With that in mind here are those who are believed to be in consideration for the position.

Lily Eskelsen Garcia (Pictured Above, On The Right) - The former President of the NEA, she is the immediate past President of the Union having not run for re-election after serving two terms in office.  She was first elected in 2014 and was the first Latina to head the three-million-member Union.  Eskelsen-Garcia started out as a Lunch Lady, before becoming an aide to a Special Education Teacher.  She then went on to get a teaching degree from the University of Utah and got her first teaching position in 1980 teaching fifth and sixth graders. In 1989 she was named Utah Teacher of the Year.  In 1990 she was elected Utah Education Association President, a position she held until 1996. According to Politico, Eskelsen Garcia is considered the favorite to be nominated, due to her experience in the classroom and as the President of the largest Union in the country.

Randi Weingarten (Pictured Above, On The Right Of Eskelsen Garcia, Wearing Sunglasses) - the President of the American Federation of Teachers (AFT), Weingarten is a powerful and outspoken voice on education issues and political issues.  Weingarten would bring a unique skill set to the position.  In addition to being a Union President, she also has a law degree and spent six years working as a Teacher at Clara Barton High School in Crown Heights Brooklyn.  As a Teacher she taught Law, Ethical Issues in Medicine, AP Political Science, and U.S. History and Government.  In 1997, Weingarten was elected Treasurer of the United Federation of Teachers (UFT), the Union that represents Teachers in the New York City Public School System.  In 1998 she was appointed President of the Union, a position she held until 2009 when she was elected President of the AFT.  Weingarten could spark opposition from Republicans as she is a big figure within the Democratic Party and was active on the campaign trail in support of Biden.  She is also more activist and radical than Eskelsen Garcia, which could cost her some votes among moderate Republicans.

While there are a lot of names floating around in regards to whom Biden will pick, many media outlets believe that the race is likely to come down to Eskelsen Garcia or Weingarten.

To Read This Labor News Story In Its Entirety, Go To: https://ucommblog.com/section/national-politics/union-leader-education-secretary-yes?fbclid=IwAR1JbLwrcfcW_jD1Z5QZAPLHHqXEu3qfKRibWuZXtdvHPAhwD9PBHj_9-4U