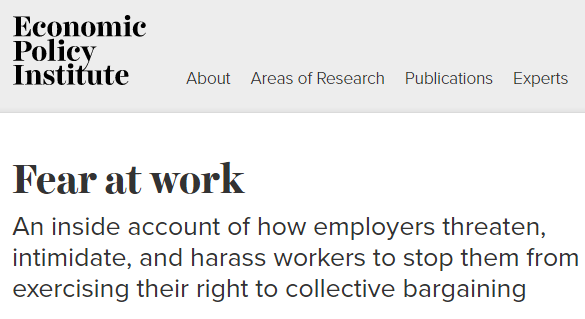 Recent reports from the Economic Policy Institute (EPI) show how Unions help Working People during times like the Coronavirus Pandemic and how they’re hobbled from doing more by Anti-Worker policies and practices.

Studies have shown time and time again that Unions are good for Working People, both those covered by a Collective Bargaining Agreement and the workforce as a whole.

This is particularly true in terms of wages, benefits and working conditions like safety and having a voice on the job.

This year, the Coronavirus has shown just how vital these are to a healthy society and economy.

And most people would join a Union if they could, but Anti-Worker policies have made it increasingly difficult to do so, leaving far too many Americans voiceless and at real risk.

“Now, ‘more than ever, we need strong’ Labor Laws ‘to protect’ Working People from the health and economic impacts of the Coronavirus Pandemic,” EPI Senior Fellow Lynn Rhinehart said. “We ‘need’ policymakers ‘to use their power to halt and reverse the four-decades-old trend of rising inequality, while also creating meaningful reforms that help workers organize Unions.’”

Rhinehart is a Co-Author of the report: Why Unions Are Good For Workers - Especially In A Crisis Like COVID-19, that assesses the situation for Workers during the ongoing pandemic and calls for policies that would boost Workers’ rights, safety and wages.

The study notes Unionized Workers have been able to secure enhanced safety measures, additional premium pay, paid sick time, and a say in the terms of furloughs or work-share arrangements to save jobs.

For Workers considered essential, many have been forced to work without protective gear, have no access to paid sick leave, and when they have spoken up about health and safety concerns, they’ve been fired.

Without such basic protections, thousands have contracted the virus and many have died.

Unfortunately, far too many employers are shirking their responsibility to their Employees, if not outright crushing attempts at collective action.

Among the report’s policy proposals to empower Working Families is passage of the PRO Act, which International Brotherhood of Electrical Workers (IBEW) Members helped get passed in the House of Representatives.

The legislation would strengthen the ability of Private Sector Workers to form Unions by increasing penalties against employers for violating the National Labor Relations Act (NLRA), as well as those who fire Workers for organizing.

It would also ban Captive Audience Meetings, where Workers are forced to listen to Anti-Union messaging, and override Right-To-Work (for less) Laws, among other actions.

The PRO Act was introduced in the Senate, but has been stalled by Republican Majority Leader Mitch McConnell.

The EPI catalogued the many nefarious actions of unscrupulous employers to keep Unions out in its report, Fear at Work, where it looked at different Unionization drives to illustrate what Employer Opposition Campaigns often do to keep their Workers voiceless.

It notes companies collectively spend $340 million a year on "Union Avoidance" Consultants who teach them how to exploit weaknesses in Labor Law to scare Workers out of exercising their legal right to collective bargaining.

To Continue Reading This Labor News Story, Go To: http://www.ibew.org/media-center/Articles/20Daily/2011/201119_HowUnions