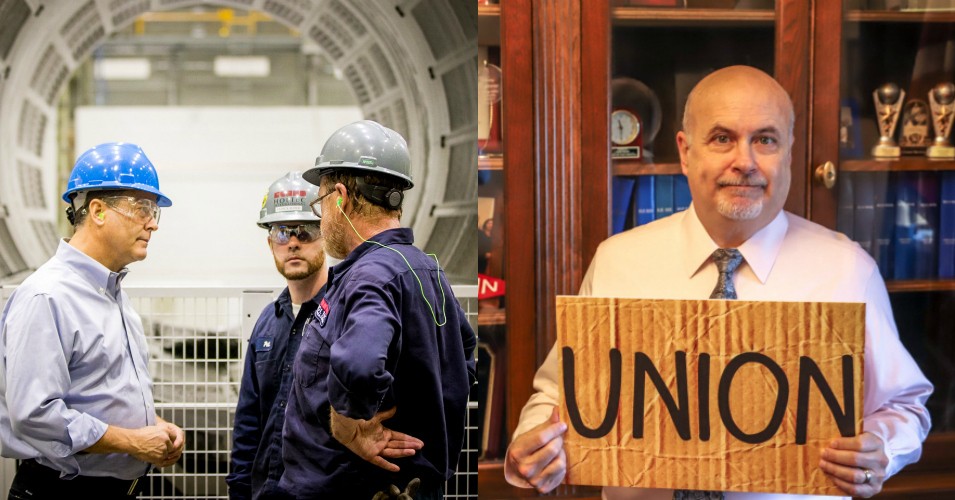 Common Dreams Editor’s Note: Pictured above are U.S. Congressmen Donald Norcross (Democrat-New Jersey) and Mark Pocan (Democrat-Wisconsin), who have joined together to create a Labor Caucus in Congress.  (Photos Courtesy of Donald Norcross For Congress and Representative Mark Pocan Via Facebook)

(WASHINGTON, D.C.) - Amid a flurry of new campaigns and initiatives launched in the wake of President-Elect Joe Biden's victory, a pair of Democratic Congressmen who are both decades-long Union Members have announced the creation of a Labor Caucus to advance an agenda that centers needs of Working Families in Congress.

"President-Elect Joe Biden's new administration ‘gives the Democratic Party the opportunity to reprioritize’ Working Families ‘at the center of our legislative agenda,’" declared Pocan, before taking aim at the outgoing president, who still refuses to accept the election outcome.

"Under Donald Trump, ‘we've seen the erosion of Labor Rights, (a) rise in Union-Busting and the prioritization of corporate profits over Working People's livelihoods and safety,’" Pocan said. "It's ‘time for Working People to have a voice in Congress again.’"

The Wisconsinite called for the incoming Congress to reaffirm their "dedication to strengthening Unions and helping (Workers) by urgently passing legislation like the PRO Act and the Raise the Wage Act."

Both of those Bills were passed by House Democrats during the current Congressional session, but never stood a chance in the legislative "graveyard" of Senate Majority Leader Mitch McConnell (Republican-Kentucky).

With two runoff races in Georgia scheduled for January, control of the upper chamber next year remains uncertain.

The Protecting the Right to Organize (PRO) Act (H.R.2474) features several provisions that Progressives collectively celebrated as one of the most significant efforts to expand Workers' Rights in decades.

Whether or not the Democrats can pull off another pair of wins in Georgia to seize control of the Senate, Pocan, Norcross and Labor Leaders are hopeful the Biden Administration will usher in a new era of expanded protections and benefits for Workers and their families.

"Labor ‘has shaped my life, taking me from the construction site to Congress,’" Norcross said. "While the Trump Administration ‘has tried to diminish’ Labor Rights, President-elect Joe Biden's incoming administration ‘understands the dignity of work and that Workers' rights are human rights.’  ‘Every’ American Worker ‘should have the opportunity to earn a fair day's wage for a fair day's work, and working families deserve a bigger voice in Congress.’  ‘I look forward to working together with our brothers and sisters in Labor to pass legislation for American Workers and their futures.’"

At least one Labor group is already expressing excitement about the new caucus created by Norcross and Pocan, and what it may be able to accomplish on Capitol Hill: Communications Workers of America (CWA), the Nation's largest Union for Communications and Media Workers.

To Continue Reading This Labor News Report, Go To: www.commondreams.org/news/2020/11/13/longtime-union-members-pocan-and-norcross-announce-labor-caucus-advocate-workers?utm_campaign=shareaholic&utm_medium=Social&utm_source=facebook&fbclid=IwAR1zEO-y5FFAeU-X_mLNrYZzc8wDprP4xJ8KTsbKy_U-yX1V0avqa-3foTo