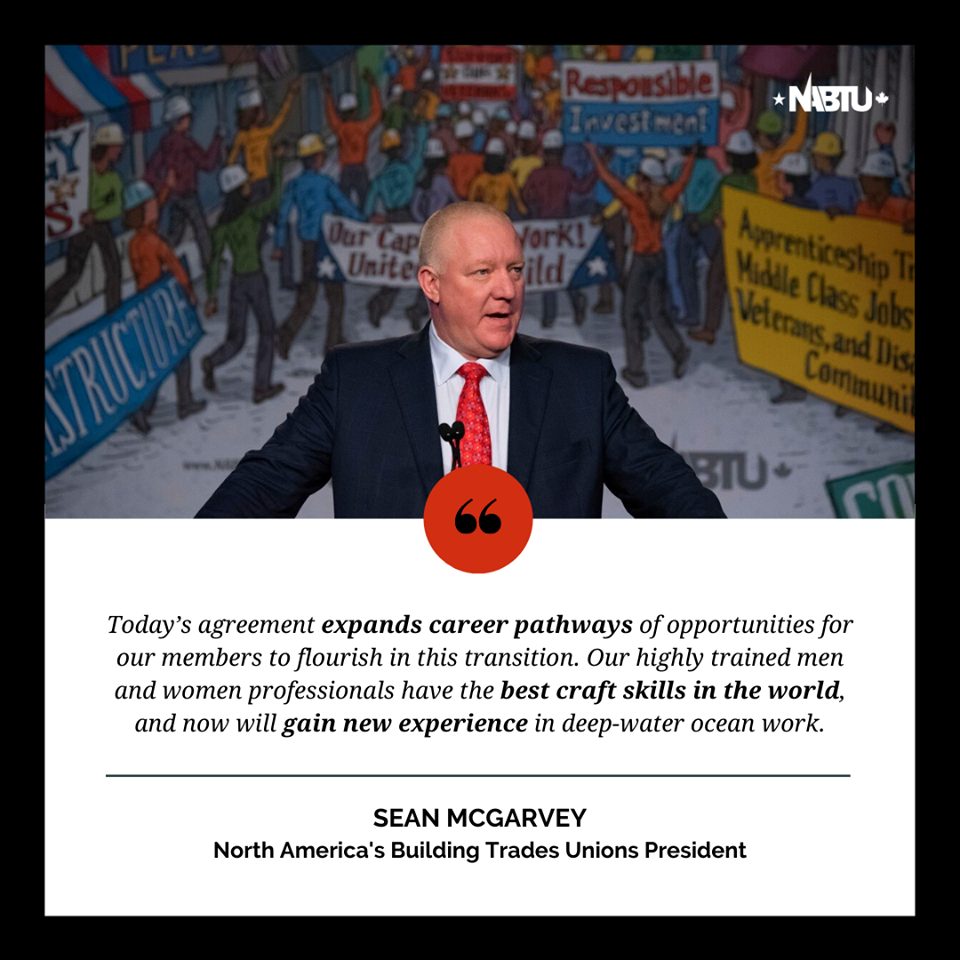 The partnership will create a national agreement designed to transition U.S. Union Construction Workers into the offshore wind industry in collaboration with the leadership of the 14 U.S. NABTU affiliates and the National AFL-CIO.

Orsted’s agreement with NABTU represents a transformative moment for Organized Labor and the Clean Energy Industry.

This framework sets a model for Labor-Management cooperation and workforce development in the budding offshore wind industry.

There are currently 15 active commercial leases for offshore wind development in the U.S.

According to a report released by the American Wind Energy Association, if fully built, these leases would support up to 30 GW of offshore wind capacity – representing an estimated 83,000 jobs and $25 billion in annual economic output within the next decade.

“(This) agreement ‘expands career pathways of opportunities for our Members to flourish in this transition,’” NABTU President Sean McGarvey said. “Our highly-trained men and women professionals ‘have the best craft skills in the world’ and ‘now will gain new experience in deep-water ocean work.’  Our agreement ‘is based on a successful model developed by the Rhode Island Building Trades for the Block Island Wind Farm project.’  We ‘commend’ Ørsted for ‘coming to the table to work in partnership with us and our Membership, and we also thank National AFL-CIO Secretary-Treasurer Liz Shuler for her help and support throughout the process.’”

Orsted has the largest footprint of any offshore wind developer operating in U.S. waters, having been awarded 2.9GW of power contracts up and down the Eastern Seaboard from Rhode Island to Maryland.

This announcement underscores the company’s desire to solidify offshore wind’s position as an incubator for Union Green-Collar job creation and innovation.

“Ørsted ‘believes the best Workers are always the best-trained Workers, and we are proud to have earned a strong record of working with skilled Union Labor to build the country’s first offshore wind farm, the Block Island Wind Farm, where more than (300) Union Workers were employed,’” said David Hardy, the CEO of Ørsted Offshore North America.

“We ‘appreciate’ NABTU’s ‘cooperation and the collaborative approach our Union partners have brought to this endeavor and look forward to learning from and working with them on this groundbreaking partnership,” Hardy said.

To Continue Reading This Labor News Story, Go To: https://nabtu.org/press_releases/nabtu-orsted-sign-landmark-mou/?fbclid=IwAR0d9tKtq_Op4aLAJIyWMwtZdplXdRw3fidRCgeTeK_lWv9JAamNhKJ5Al4