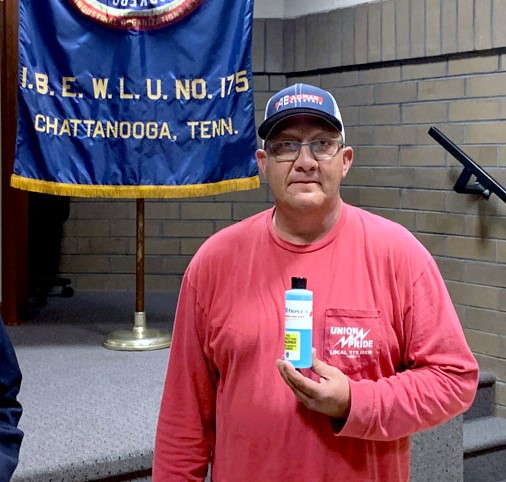 (CHATTANOOGA, TENNESSEE) - Steven Hood has worked for nearly a quarter of a century as an Industrial Electrician, so he’s seen his share of Co-Workers on jobs getting frustrated when friction would cause their drill bits and saw blades to stop cutting, seize up or snap.

“People were ‘using all kinds of crazy stuff to keep them from burning up - even mustard,’” the Member of Chattanooga, Tennessee Local 175 said with a laugh. “I ‘had never invented anything in my life, but I thought there just had to be a better way.’”

In his spare time, Hood brainstormed ideas for effective lubricants with a Chemical Engineer friend of his.

“I ‘just kept messing with stuff over the years,’” he said, coming up with and tweaking more than a dozen different formulas. “We’ve cut about (400,000) holes ‘through just about every metal possible.’”

Eventually, the Union Electrician landed on an oil-free and environmentally safe lubricant he dubbed “Triple-S.”

While that stands for “Stainless Saw Saver,” Hood said that his invention works on every make of steel saw blade and drill bit.

A person simply sprays on Triple-S, he said, to create a heat-dispersing film that reduces the potential for shearing.

“It ‘can help our folks make clean, even cuts so they can get the job done right the first time,’” Hood said. “Regular application ‘can help an electrician save ($40 to $45) on the cost of replacing a burnt-up drill or saw.’”

Triple-S also has the advantage of not being as smelly or messy as the more traditional cutting fluids that contain pungent chlorine or phosphorus, he said.

“Most of those are oil-based,” Hood said. “Nobody ‘in the world makes something like this.’”

Once he was satisfied with his formula, Hood made small batches of Triple-S out of his home and then simply gave away bottles of it to Co-Workers and others who asked for it.

Inventing the lubricant wasn’t about making money, he said.

“I ‘already have a comfortable and secure Union job,’” said Hood, who works for Chattanooga-based Adman Electric, a member of the East Tennessee Chapter of the National Electrical Contractors Association (NECA). “They’re ‘great people and I enjoy working for them.’”

Over time, Hood estimates that several hundred people have used Triple-S and a lot of those satisfied customers would ask him why he wasn’t charging them for it.

In June, he finally decided to give selling it a go, moving his manufacturing effort to a three-bay garage in suburban Chattanooga - “a nice, wide-open set-up” - and he applied for a business license and a patent.

Since then, and with help from his family, Hood has been spending evenings and weekends ramping up Triple-S production, filling thousands of eight-ounce plastic squirt bottles.

His goal has been to package about 20,000 cases each month - 12 bottles per case, packaged with a product datasheet and able to be ordered in large quantities for industrial companies.

To Continue Reading This Labor News Story, Go To:  www.ibew.org/media-center/Articles/20Daily/2010/201020_Tennessee