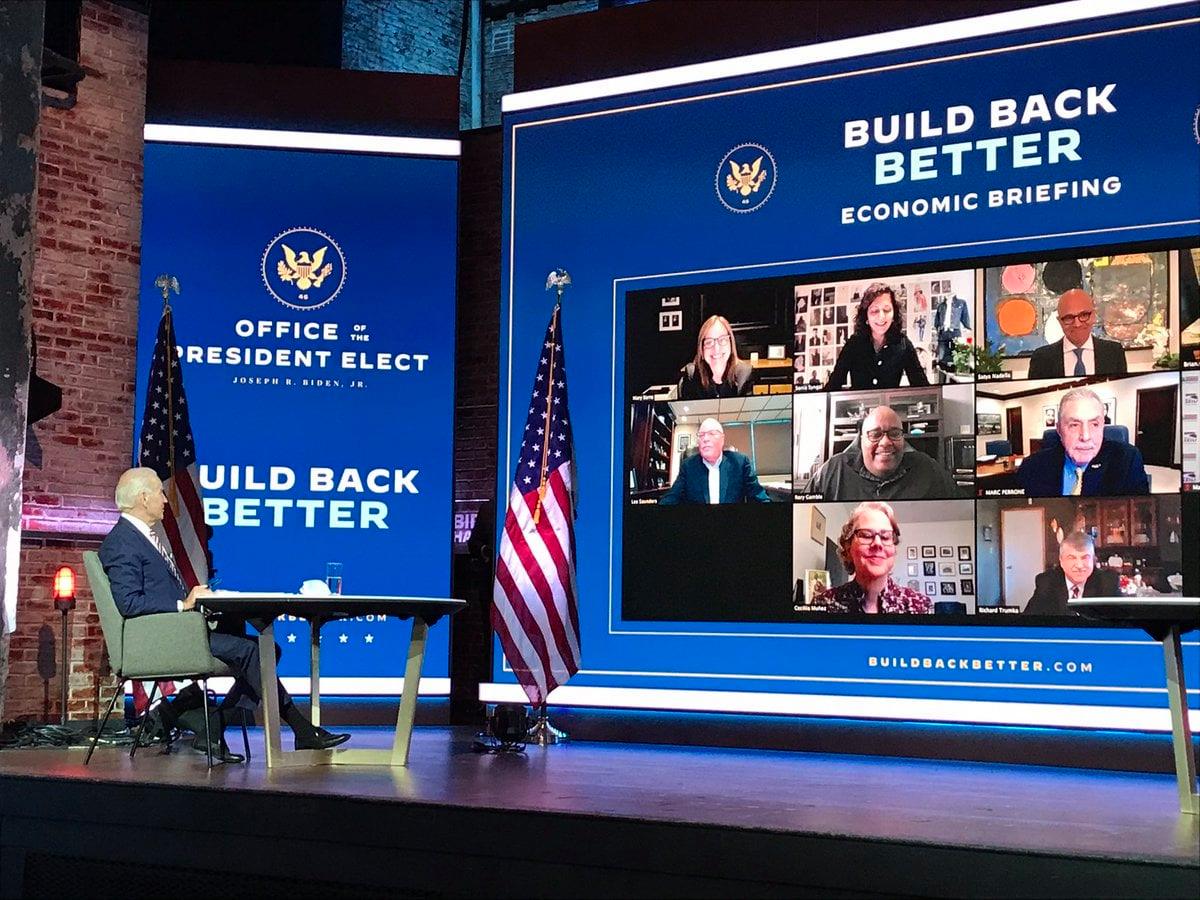 (WILMINGTON, DELAWARE) – President-Elect Joe Biden vowed Monday (November 16th) that Labor Unions would have increased power in his administration and he said Business Leaders agreed with him.

“'I said I want you to know I'm a Union Guy,'” Biden said of his conversation afterward during a news conference.  “Unions ‘will have increased power.’  (The Business Leaders) ‘just nodded.’  ‘They understand.’ It's ‘not’ anti-business.’  ‘It's about economic growth, creating good paying jobs.'”

Biden’s edict serves as a warning to business where his priorities lay after the pro-business years of Republican President Donald Trump's Administration.

Biden, in his remarks, doubled down on his support of Unions and the environment.

The Biden and Vice President-Elect Kamala Harris meeting with Business and Labor Leaders “was ‘really encouraging - quite frankly to get business and labor together, agreeing on the way forward,’” Biden said after their sit down.

He said his plans to help the country recover from the Coronavirus Pandemic-induced recession included an increased Minimum Wage - he called for a $15 Minimum Wage nationwide - better benefits and stronger Collective Bargaining Rights.

“That's ‘how we build back the Middle Class better than ever,’” Biden said.  “That's ‘how we make sure Workers are treated with dignity and respect they deserve,'  'I could tell you that I was very encouraged’ by our conversation.  ‘There's only so much we can do and only way we do any of this is when we work together.’  ‘I know we can do this.’”

He said he saw the election as a mandate from the American People for both sides to work together: “They ‘want us to cooperate.’  ‘They want us to deliver results.’  ‘And the choice that we will make is we are going to do that.’  That's why ‘I'm so pleased today that we were able to bring together Business and Labor Leaders to make the choice jointly with us.’  They ‘represent very different perspectives, but I'm convinced that we can all come together around the same table to advance areas of common ground.’"

The president-elect virtually gathered in order to discuss moving forward with an economic recovery while battling the pandemic.

Several states, including Michigan, have reinstituted previously ended restrictions that include closing some businesses to stop the Coronavirus surge across the U.S.

"We ‘all agreed that we want to get the economy back on track,’" Biden said. "We ‘need’ our Workers ‘to be back on the job by getting the virus under control.’  ‘We're going into a very dark winter, things are going to get much tougher before they get easier.’  ‘That requires sparing no effort to fight COVID, so that we can open our businesses safely, resume our lives and put this pandemic behind us.’"

Biden added that everyone on the call agreed part of the effort to stop COVID-19 means backing a national strategy with measures that include a face mask mandate, increased availability of testing, use of therapeutics and safe and free distribution of a vaccine.

They all also acknowledged the need for states and localities to get funding needed to get through the pandemic.

"The UAW has had productive ongoing discussions with our Detroit-Three counterparts and other Employers about protocols to keep our economy moving and at the same time make tough decisions to protect UAW Members and all Working Americans," UAW President Rory Gamble said in a statement. "But we all expressed to the incoming administration an acute need for an immediate economic package for those hard hit by this pandemic, help for our states and our front line providers - and specifically to protect the health and safety of UAW Members in the workplace."

Biden also discussed "the need to own the electric vehicle market" during the call.

For More, Go To: www.dailymail.co.uk/news/article-8955631/Joe-Biden-says-told-CEOs-union-guys-going-increased-power.html