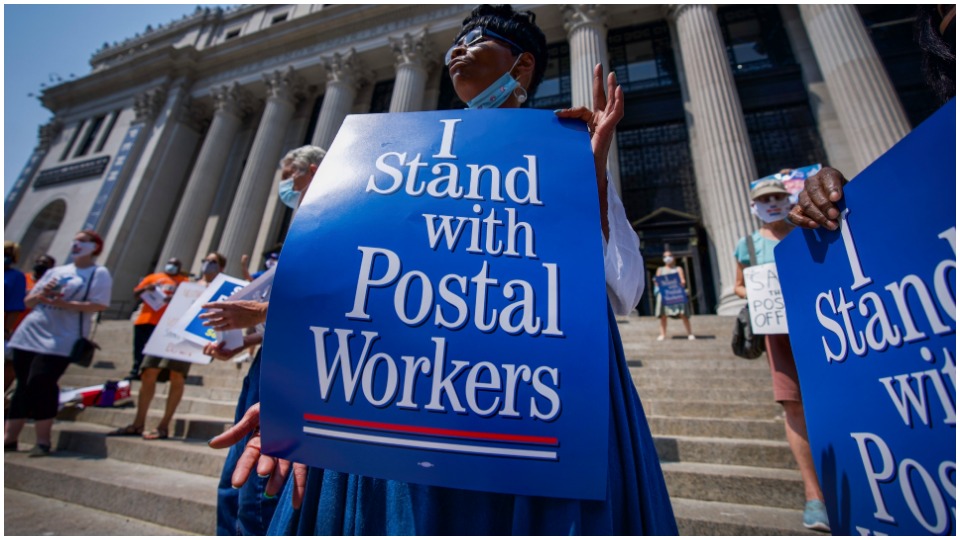 (WASHINGTON, D.C.) - The 2020 election may be mostly over, but Trump Postmaster General Louis DeJoy’s plans to destroy the U.S. Postal Service (USPS) aren’t - and the Postal Workers are leading a wide-ranging national coalition that has set up events that will occur today (November 17th) events to stop him.

At stake, he explained, is DeJoy’s scheme, shelved due to public pressure in the months before the election, to rip out sorting machines, fire thousands of USPS Workers - most of whom are Unionized, People of Color, female, Veterans, or combinations thereof - and slow down the delivery of everything from medicines to Social Security checks.

DeJoy made those moves at the behest of his sponsor, GOP Oval Office occupant Donald Trump, to slow, stall, and negate mail-in balloting.

The Coronavirus Pandemic sweeping the country made mail-in ballots needed.

Trump feared mail-in ballots would encourage higher turnout and sweep him out.

Also at stake, Dimondstein said, is to stop, once and for all, the GOP/Right Wing plan, backed by corporate mailers, to carve up the Postal Service, sell off its profitable sections to the private sector, and leave the rest of the country to suffer.

“Our opponents ‘are moving in for the kill and exploiting this pandemic with shameful cuts’” to services and trying “to ‘sell it off and privatize it,’” he stated.

DeJoy, a major Republican donor whom Trump had his hand-picked Postal Service Board install earlier this year, began the destructive moves.

His actions led to a public uproar and lawsuits by Postal Unions, too.

They culminated in DeJoy’s retreat, at least temporarily, plus daily oversight of USPS operations, or lack of them, by U.S. District Judge Emmet Sullivan in Washington, D.C.

In the end, USPS Workers successfully delivered 65 million mailed-in ballots to local Elections Boards, all postmarked on or before November 3rd.

But DeJoy made it clear his retreat was only temporary.

Today’s events, said Dimondstein, aim to show public support not just for permanently repelling DeJoy’s disastrous agenda, but for positive moves to put the USPS back on its financial feet.

To Continue Reading This Labor News Story, Go To: https://peoplesworld.org/article/postal-workers-saved-the-election-now-they-need-help-to-stop-privatization/