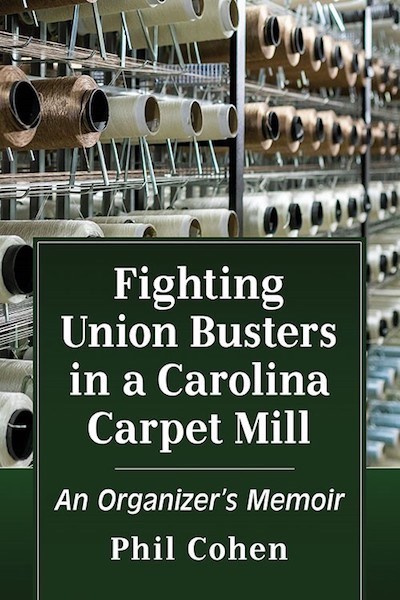 (NEW YORK CITY) - Phil Cohen, a Veteran Union Organizer, was called out of retirement in 2017 by Workers United/Service Employees International Union (SEIU) to investigate and expose an illegal Union-Busting plot by Mohawk Industries at its North Carolina carpet mill.

Cohen’s account of his fight to prove that management was behind an unlawful Decertification Petition and forced Workers to sign using strong-arm tactics, is the subject of his memoir.

LaborPress talked with Cohen about his book, his background, and how he was able to achieve his final result:

LP: Please share with us a brief history of your activities as a Union Activist/Organizer.

PC: I signed my first Union Card as a New York City Taxi Driver in 1974.  During 1980 I moved to North Carolina, found work as a City Bus Driver, and became Chief Steward of what had been a poorly-represented Amalgamated Transit Union (ATU) Local.  I forced the Town of Chapel Hill to the bargaining table, receiving a lot of press coverage in the process.  In 1988, I was hired as a Lead Organizer and troubleshooter by the Amalgamated Clothing and Textile Workers Union, now called Workers United/SEIU.  I became a specialist in defeating professional Union Busters and negotiating first contracts.

LP: What Anti-Union tactics did management use to coerce workers to sign their unlawful Decertification Petition?

PC: Granting free rein to Anti-Union Employees - allowing them to roam the plant soliciting signatures during working hours.  Numerous instances of direct management solicitation, both on the shop floor and calling Workers into their office.  Mohawk held Captive Audience Meetings and frequently posted on its TV monitors (located in break rooms and throughout the plant) claiming to be champions of Workers’ Rights, promising to defend their petition, and casting the National Labor Relations Board (NLRB) charges as lies.

LP: How did you persuade Workers to join you in your fight?

PC: The greatest challenge was helping Workers overcome their fear of management retaliation and accompanying me to the NLRB’s Winston-Salem office to give sworn affidavits regarding the above.  The Executive Board of Local 294-T was of great assistance.  I gave them a crash course in the National Labor Relations Act (NLRA) and how to investigate Unfair Labor Practices (ULPs).  They identified witnesses and convinced them to meet with me privately at the Union Hall, where I explained their rights and protections under Federal Law if they became a witness.  I appealed to their courage and innate desire to see truth prevail.

LP: What evidence were you able to present to make your case?

PC: Three members of management - a department head, the human resource manager and a corporate human resource executive, were cited by the NLRB for numerous instances of direct solicitation, often involving coercion.  This involved both cumulative testimony (numerous witnesses testifying about similar incidents) and corroborative testimony (multiple witnesses testifying about the same incident).  We were also able to document management knowledge of Anti-Union Employees roaming the plant to solicit signatures during working hours.  Based on witness testimony and material evidence, Mohawk was also cited for transferring the petitioner to third shift to solicit night Employees, unlawful surveillance of Employees, an unlawful posting, and making false promises to encourage decertification.

To Continue Reading This Labor News Story, Go To: http://laborpress.org/phil-cohen-memoir-chronicles-the-fight-against-union-busting-in-north-carolina/