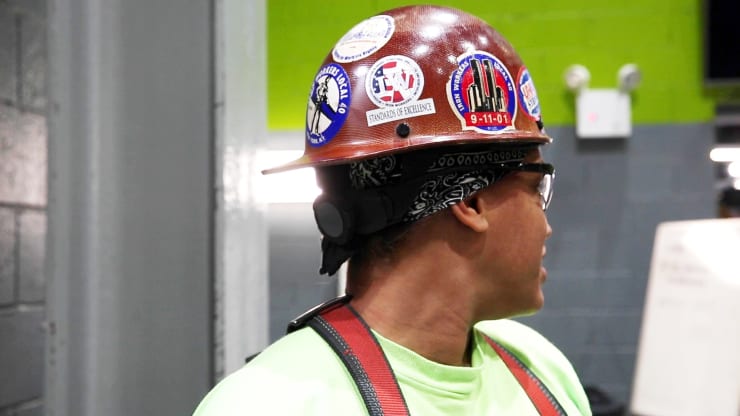 (NEW YORK CITY) - Memesha Davis is a Brooklyn native, a mother of two and a Structural Ironworker - a job that she says has changed her life.

“Prior to ironwork, I had every job that you could possibly think of: Customer service… retail… hostess - and nothing ever fulfilled what it is that I wanted to do, so I’ve always tried to fill the void of not working in a Trade or work with my hands,” she says. “I was not happy with that work and I was making absolutely nothing.”

In 2015, Davis was a hostess at the Barclays Center’s 40/40 Club and was also working at her aunt’s restaurant.  She says her hours were limited and inconsistent, and without benefits, she relied on Medicaid and food stamps to support her family.

“The year that I was working at the Barclays Center and with my aunt, I made maybe ($13,000) for the year,” she says. “At the time, my son was six, my daughter was seven.  Raising kids on that budget was painful because there will be times where they just want something that costs a dollar, ‘but a dollar was like a stretch.’  It was ‘just like a look of just disappointment on their faces’ and being a single mom and trying to provide for your children ‘as best as you can, it takes a toll on you daily.’”

This year, Davis expects to make over $100,000 as a Union Ironworker Journeyman.

A graduate of William E. Grady Career and Technical Education High School, Davis says she has wanted to work in a Trade Field since she was a teen, but felt pressured to take her high school’s culinary arts program: “As a fourteen-year-old, a teenager, a young girl, I was told that I wouldn’t be able to make it in that field, so I ended up switching from HVAC into culinary arts cooking – ‘and that wasn’t my passion.’”

Years later, Davis was introduced to ironwork through Nontraditional Employment for Women (NEW) - a New York-based organization that prepares, trains and places women in careers in skilled construction, utility and maintenance trades.

She chose to enroll in NEW’s free seven-week training program in 2015, noting that they also provided her with a generous, but ultimately essential, free metro card that allowed her to get to and from classes.

“NEW was ‘definitely a life-changer.’  ‘It gave me back my confidence’ and like I went from ‘I can’t’ to ‘I know I can,’” recalls Davis. “They ‘saw a potential in me and they guided me into being more than just a hostess.’”

She was immediately hooked.

“I remember coming to the school and taking a tour and I was like, ‘Oh, my God! This is this for me,’ because I’m an ‘adrenaline junkie,’” she says, describing the large warehouse-like 12,000-square-foot workshop that Apprentice Ironworkers are trained in.

“You see this big column, you see a replica of what a building will look like in the field, you have these torch booths, you have the welding booths,” she said.

On top of that, “the Apprenticeship Program for ironwork ‘didn’t cost anything,’” she said.

To Continue Reading This Labor News Story, Go To: www.cnbc.com/2020/11/10/what-it-takes-to-earn-100000-a-year-as-an-ironworker-in-new-york.html?__source=sharebar|linkedin&par=sharebar