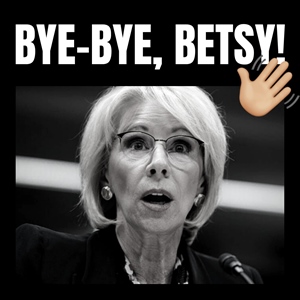 (WASHINGTON, D.C.) - After the 2020 Presidential Election was called for Democrat Joe Biden last weekend, the country's Educators released a collective sigh of relief knowing that, at long last, the days were numbered for the woman they consider Public (School) Enemy #1: Education Secretary Betsy DeVos.

The National Teachers Unions, their city and state affiliates, school superintendents, principals, educators and parents took to social media to throw DeVos an early retirement party, posting photos and videos of themselves popping bottles of champagne with tears in their eyes, retweeting GIFs and memes of doors being slammed shut, of actors performing trite "buh-byes" and of photo-shopped pictures of DeVos as Cruella de Vil and other Disney movie villains. 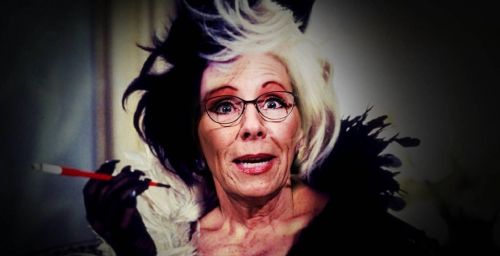 Hours later, their palpable release was bolstered by Biden, who in his victory speech gave them the warm hug they had been pining for: "For America's Educators, this is a great day.  You're going to have one of your own in the White House - Jill is going to make a great First Lady."

Jill Biden, a Member of the National Education Association (NEA), is an English Teacher at a community college in Virginia.

"We were so happy," Mandy Manning, the 2018 National Teacher of the Year, says.

Manning has been an educator for 22 years, including the last 11 teaching Immigrant and Refugee students English and math in Spokane, Washington.

"We are so excited to see a return to support for public schools because, while we have a lot of work to do in order to be able to serve each and every student, public schools are where that's actually going to happen.  I am so hopeful and it's such a good feeling after not having that for so long," she said.

DeVos, who was repeatedly ranked the most unpopular Cabinet Secretary in the Trump Administration, is also one of the President's longest serving.

Her most notable achievements include rolling back and rewriting Obama-era guidance and regulations, including those aimed at protecting the rights of transgender students and survivors of campus sexual assault through Title IX.

She also revoked higher education regulations aimed at curbing bad actors in the for-profit college sector and discharging student loan debt for borrowers they defrauded, as well as nixed school discipline guidance aimed at stemming the school-to-prison pipeline for Students of Color – a controversial move that ignited the Civil Rights Community and resulted in one member of Congress calling for her resignation.

The department DeVos oversees has been marked by failure to make significant inroads on the administration's school choice agenda, difficulty staffing the Department of Education, drawing a record-setting number of lawsuits - as well as being on the receiving end of vociferous pushback from much of the K-12 and Higher Education Community she was tasked with overseeing.

Her tenure was defined by tumult from the start: The now-infamous confirmation hearing before the Senate Health, Education, Labor and Pensions Committee, where she gave ammo to critics who said she had a worrisome lack of understanding of education policy, as she stumbled on topics like the difference between proficiency and growth and a Federal Law regarding the education of students with disabilities.

To Continue Reading This Labor News Story, Go To: www.usnews.com/news/education-news/articles/2020-11-10/bye-betsy-educators-celebrate-the-end-of-the-devos-era?src=usn_fb&fbclid=IwAR23y1C3iZhd02b9ySyGSwNR_r674k73BysDHm8TrIcaFTggdf1GjQ3A01U