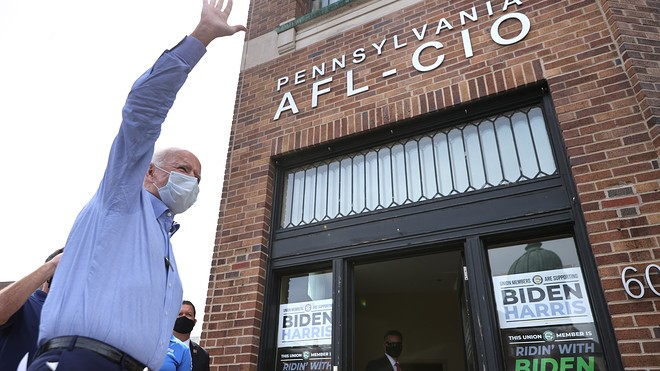 In January 2021, a newly-inaugurated President Biden is likely to pull back those same orders, according to Union Representatives, who say the orders have weakened their ability to ensure Rank and File Staffers are treated fairly.

The Biden Transition Team didn’t respond to a request for comment, but Biden’s campaign website has signaled that the President-Elect will address these issues: “There’s a war on organizing, collective bargaining, Unions and Workers.  It’s been raging for decades, and it’s getting worse with Donald Trump in the White House.”

The President-Elect, among other things, supports laws that would penalize companies trying to interfere with Worker organizing efforts, according to his website.

Biden is expected to rely on EOs for government policy if he cannot make changes through law in a divided Congress.

“This is ‘not just about Employees,’” said Tony Reardon, the National President of the National Treasury Employees Union (NTEU). “Ultimately, ‘this is good for American taxpayers to have Federal Employees and agency leaders communicating and taking action together to solve problems before there’s a grievance and a lawsuit.’”

Reardon, who heads a Union with 150,000 Members, said he and his Staff had heard from Biden and his campaign in the months leading up to the November 3rd election.

“The President-Elect, ‘he was clear with me that he is extremely supportive of Labor Unions and of Workers’ Rights,’” Reardon said.

The Federal Government employed almost 3.8 million people in 2019, according to the Bureau of Labor Statistics (BLS).

Of that sum, 1.15 million were represented by Unions, the agency said, noting that the category groups together Union Members and Workers without Union affiliation who have jobs covered by a Union or Employee Association Contracts.

But it’s also a peek at the President-Elect’s larger views on Organized Labor.

Last year, there were 14.6 million Salary and Wage Workers who were Members of a Union, according to the BLS.

That’s just over 10% of the workforce, and a 10-percentage-point drop from 1983, the first year comparable statistics became available, the agency said.

To Keep Reading This Labor News Story, Go To: www.marketwatch.com/story/biden-could-reverse-trump-orders-on-federal-worker-organizing-rights-heres-what-that-could-mean-for-unions-in-the-us-2020-11-11