Representing 1.4 Million Members Across The U.S. âWho Provide The Vital Services That Make America Happen,â AFSCME Says âItâs Time To Build On The Affordable Care Act, Not Take Away Health Care During A Pandemicâ 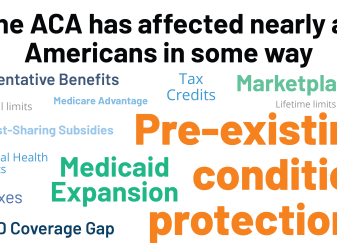 (WASHINGTON, D.C.) - Representing 1.4 million Members across the U.S. who provide the vital services that make America happen, the American Federation of State, County & Municipal Employees (AFSCME) Says it’s time to build on the Affordable Care Act (ACA), not take away health care during a pandemic.

For more than a decade, wealthy special interests and Right-Wing politicians have tried every way possible to destroy the Affordable Care Act, including its protections for people with pre-existing conditions.

Each time, most recently in the November election, people across the country have affirmed their support for this ground-breaking law, which has given millions of families’ security and peace of mind.

Now, Donald Trump and Mitch McConnell are at it again.

Ignoring the voice and the will of the people, they are asking the highest court in the land to rip health coverage away from 21 million people.

Throwing the health care system into chaos and disarray would be a bad idea at any time.

To do it in the middle of the worst pandemic in a century is unconscionably cruel and reckless.

This is clearly a moment to strengthen American health care, not tear it down.

That is why the incoming Biden-Harris administration is committed to building on the ACA, with a plan to expand coverage, increase choice and lower costs.

McConnell’s callous disregard for millions of Americans who will be uninsurable because of pre-existing conditions is one of the biggest reasons Georgians must ensure he no longer leads the United States Senate come January.

More than 10 million Americans have contracted COVID-19, many of them Front-Line Public Service Workers who are fighting every day to keep our communities safe and strong.

It would be shameful for them to be slapped with higher premiums and out-of-pocket costs while insurance companies rake in massive profits.

If the Supreme Court overturns the ACA, we will see higher prescription drug prices and a likely end to Medicaid expansion.

It would eliminate 100% coverage for basic preventive services like vaccinations and cancer screenings.

It would mean a return of annual caps and lifetime limits.

And the 133 million Americans with preexisting conditions - 17 million of them children - would lose their protections and be left at the mercy of insurance companies.

The ACA has saved countless lives.

It’s as simple as that.

But no matter what any court decides, AFSCME will continue the fight to strengthen the ACA and give more people access to the medical care they need.

That’s why we will organize and mobilize in Georgia to elect Jon Ossoff and the Rev. Raphael Warnock so we enter 2021 with a Pro-Worker, Pro-Health care United States Senate.

With Members in communities across the Nation, serving in hundreds of different occupations - from Nurses to Corrections Officers, Child Care Providers and Sanitation Workers - AFSCME advocates for fairness in the workplace, excellence in public services and freedom and opportunity for all Working Families.

To Directly Access This Labor News Report, Go To: www.afscme.org/press/releases/2020/time-to-build-on-the-aca-not-take-away-health-care-during-a-pandemic