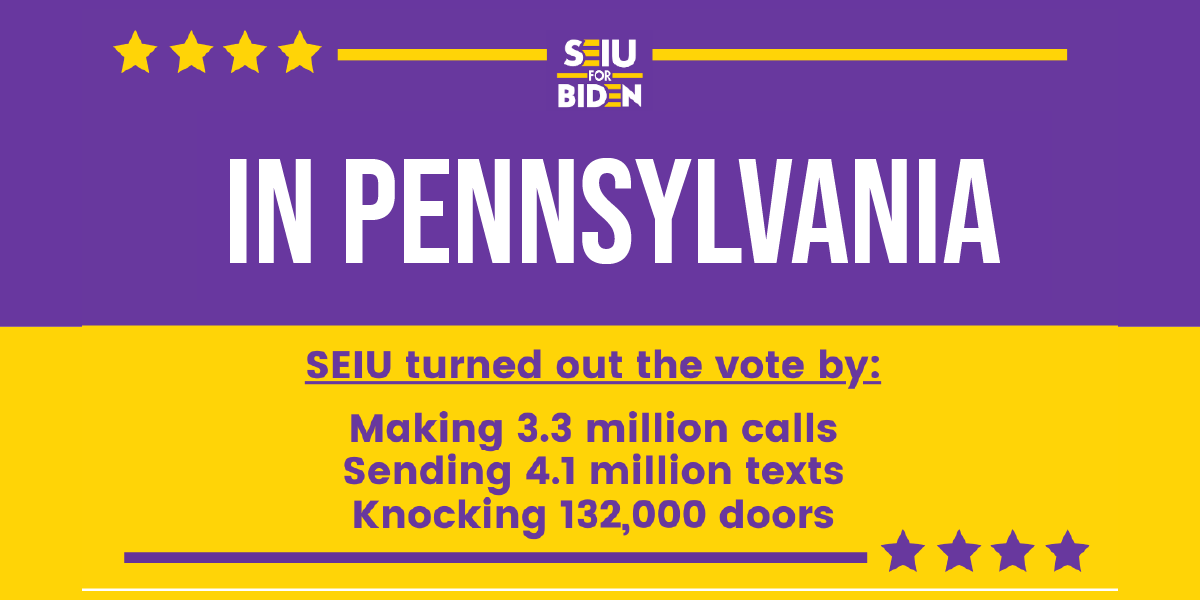 (NEW YORK CITY) - As the  “saviors of democracy” who not only helped Democrat Joe Biden win the White House in key Battleground States but who are now also fully prepared to protect that victory from Republican President Donald Trump’s ongoing protestations - Essential Union Workers from across the country should have tremendous clout demanding a Pro-Worker Agenda from the presumed President-Elect.

The day after the election, leaders from Service Employees International Union (SEIU) Healthcare Pennsylvania - a Union representing 45,000 Caregivers across this Battleground State - joined with Black Voters Matter, Our Future PA and other Pro-Labor, progressive organizations on the Harrisburg Capitol steps for a “Count Every Vote” rally they vowed would continue in the face of Trump’s ongoing challenges to the election results.

Pennsylvania AFL-CIO President Rick Bloomgingdale and Secretary-Treasurer Frank Snyder were there too.

“The President ‘decided he was winning in the fifth inning and called it a game - but we know we won,’” Bloomingdale told attendees.

Snyder invoked a football analogy, saying that Trump is defeated and that whatever “safety, fumble or interception” that may yet occur - the “game is over.”

SEIU Healthcare Pennsylvania President Matthew Yarnell told LaborPress that Trump’s efforts to stop the count in his state and the “dangerous rhetoric spewing from the White House podium” is a direct effort to disenfranchise Essential Workers - many of them People of Color.

“These are ‘folks who have been on the front lines of this pandemic and many of them have voted by mail because they have to,’” Yarnell said. “They’re ‘working twelve-hour shifts, they can’t get to the polls on election day.’”

These Workers, Yarnell says, have been out there “through thick and thin, day and night supporting our country as we’ve gone through this pandemic.”

“Pre-pandemic and post-pandemic, ‘folks who really make our country work - they deserve to have their voices heard and their ballots counted,’” he said.

This time around, UNITE HERE - the National Hospitality Workers’ Union - believes it did the “critical work” needed in Black and Brown Communities throughout the state to best Trump.

“We knocked on the doors of (575,000) voters across Philadelphia’s Black and Brown neighborhoods that had low turnout in 2016,” UNITE HERE Local 274 President Rosslyn Wuchinich told reporters during a November 5th press conference. “In those neighborhoods, we identified (60,000) Philadelphia voters who pledged to us to in person in contactless conversations to vote for Joe Biden and Kamala Harris.”

According to Wuchinich, half of those voters had not voted in 2016.

To Continue Reading This Labor News Story, Go To: http://laborpress.org/trade-unionists-called-the-saviors-of-democracy-and-the-differences-makers-in-2020-will-biden-harris-listen/